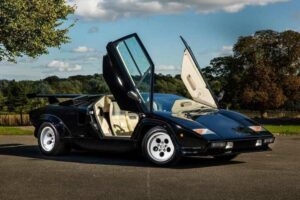 The 50th anniversary year is very nearly done, but there's no such thing as too much Countach…

I’ve never driven a Lamborghini Countach and, dare I say it, I am not sure I’m that bothered to try one. It’s not its looks because, to me, it’s the definitive supercar profile and still makes me quiver. It was also my pin-up poster of choice, back in the day. Mine was mounted in a red frame, à la the eighties, while my brother’s wall sported its opposite number from Maranello, the Ferrari Testarossa. But like the Testarossa, which I have driven, I rather fear the iconic Lambo will be a disappointment. I am not even sure I’d fit in it, either. Better to leave the saintliness of Sant’Agata intact, I reckon, but I am delighted to have the opportunity to write about this one. Especially as we’re still, just, celebrating the Countach’s fiftieth birthday.

I’d have loved to have been there at the start, at the Countach’s unveiling during the 1971 Geneva motor show. If you’re familiar with the northern Italian dialect of Piedmontese, you’ll know the name means literally contagious but it’s also an expression of happy surprise, like “Oh my God!” – I’ll bet there were a fair few countaches let out that day when the covers came off.

The show car was the prototype LP500 and, normally, the wow factor is diluted once all the necessities needed to make a car run are added. The man responsible for it, Marcello Gandini (Bertone’s chief designer at the time), said that the prototype was the “most beautiful Countach.” If anything, I think the scoops above the rear wheels and the NACA ducts in front of them were positives; they added to the Countach’s machismo.

That grew evermore bullish over the years, of course. The wider arches of the LP400 S were inspired by Walter Wolf, the Austrian former F1 team owner. In 1974 he’d taken delivery of only the third Countach made, which he thought needed a bit more muscle – visually and mechanically. So he enlarged the engine to 5.0-litres and chivvied up Pirelli to release its new wider, lower-profile P7 tyre. He also enlisted Dallara to sort the chassis mods and brought back Gandini to create the wheel arch extensions and modify the front bumper. It went on to be the basis of the LP400 S that arrived in 1979.

By the time the eighties were in full swing, Lamborghini’s finances were in a downward slump. Still, somehow, it managed to fund development of the Countach and keep the wolf from the door. In 1982 the LP5000 S arrived, like this one. And it’s the car that I had on my wall. The one that I would stare at every morning when I woke up. I’d imagine thrashing the 4,753cc V12, fed by six big-barrelled 45DCOE Webers, while racing a Testarossa.

If you’re looking make the daydreams of your youth a reality by buying an LP5000 S, it’s hard to think of finding a better one than this. It’s a UK-registered, right-hand-drive model (1 of only 23 officially imported to the UK) and has had just one owner. The fact that they only managed to cover just 8,900km in all time endorses my theory about the reality of driving a Countach, but it’s kept its condition spotless – even down to the Campagnolo stickers on the wheels and Vitaloni stickers on the door mirrors.