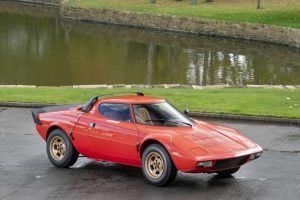 And we really do mean original…

Perhaps the most interesting development of the FCA-PSA Stellantis merger is the fate of Lancia. Seemingly set for the scrapheap after years of producing average hatchbacks for Italy, it appears to have been given a new lease of life as one of Stellantis’s ‘Premium’ brands – alongside Alfa Romeo and DS.

Quite what that means for future product obviously isn’t clear just yet – rumours are circling of an Ypsilon replacement derived from the DS3 Crossback – but it was all the excuse we needed to peruse the Lancia back catalogue. Because it really is a collection of cars like no other – you might have heard about them once or twice.

The obvious car to single out is the Delta Integrale, Lancia’s most successful rally car and all-time hot hatch pin-up. It’s hard to think of many other cars, leave alone left-hand drive, five-door hatchback, that would draw such reverence 25 years after its demise. For many it might be the definitive Lancia, an icon of stage and street forever more; but we all know its rally history goes back a little further than that…

Is there a more recognisable car than the Stratos? Surely everyone reading this would know it from a hundred paces given how famous this silhouette is. Purpose built for rallying and incredibly tiny as a result, the Stratos might still lay claim to being the prettiest rally car ever made. We’ll leave that one to debate amongst yourselves.

Clearly all the Stratoses are special, because fewer than 500 were ever made. However, this one is especially interesting, not just for the Rosso Arancio and gold colour scheme the car became famous for, but thanks to its originality. Despite approaching 50 years old – production began in 1973, and chassis 001527 is from 1974 – this Stratos has covered only 6,632km (or a little more than 4,000 miles) from new. Moreover, the advert states the car has “never been taken apart or restored”. Which is pretty remarkable, really, given the anniversaries that have passed (and the temptation to bring cars back to their best that comes with them) as well as the renewed Stratos interest of late with the MAT reincarnation.

So those incredible hammocks that pass for seats – in Havana Alcantara, no less – are as they were from the factory, the paint is untouched, as is its Ferrari V6. Yet despite all that, the Stratos appears reasonably fresh, original in the preserved, desirable sense rather than the dragged-out-of-a-grotty-barn kind of original. Of the three owners this car has had since the 1970s, one owned it for almost 30 years; the listing suggests the Lancia has been “meticulously cared for throughout its life”, an assertion the pics would support, and even comes with its original factory delivery note.

Quite the opportunity, then. Chances to acquire a Stratos of any stripe are few and far between, leave alone a nicely preserved original in the trademark colour scheme. It’s on sale at £485,000, which is quite clearly a huge chunk of cash; that said, it’s one of the few true icons of motorsport history, as successful a racer as it was an intensely desirable sports car. Whatever Lancia’s future holds, there is surely no finer representative of its past glories.