Our First Look at the Polestar 3 Electric SUV 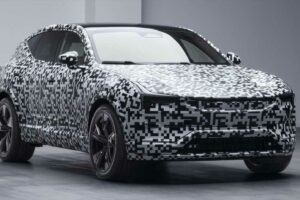 Say hello to the new Polestar 3… in camouflage. As previously confirmed, the Polestar will be built in South Carolina, making it the first electric car from the Geely brands to not come out of the conglomerate’s facilities in China. Now, we can get a better look at the new EV joining in on the obligation for any electric car maker to produce some kind of crossover.

The front end isn’t too dissimilar from the Polestar 2, except that proportionally the grille size is decreased to fit the 3’s bigger frame and slightly edgier look. Although it’s billed as an SUV, the Polestar 3 is definitely on the smaller end of that term, more E-Tron than anything genuinely monstrously sized. Without getting the CFD out I can’t be completely sure of this, but the ridging on the front doesn’t lead me to believe the 3 is aiming for the same kind of perfectly-smoothed curves that award most electric SUVs ultra-low drag coefficients, suggesting Polestar might be going more for brute power and a hefty battery.

We don’t have too many details about exactly how the 3 will work, either. Surely, it will offer two drivetrain configurations, one of them being all-wheel drive, but that’s still up in the air at this moment. We do know that unlike the Polestar 2, which was intended to be a budget competitor to the Tesla Model 3, the Polestar 3 is aiming for luxury, so expect it to compete with the aforementioned E-Tron, the BMW iX, etc.

Performance won’t be an afterthought, however, according to Polestar CEO Thomas Inglenlath. “Polestar 3 is planned to be launched in 2022 as a premium electric performance SUV that will define the look of SUVs in the electric age. It will also be the first Polestar vehicle to be built in America.”

Polestar is going very hard on the “we will build in America for Americans,” which Ingenlath repeated a few times in the press release. He was also keen to point out that Polestar is an actual automaker who can produce cars, unlike the struggles of, say, Faraday Future or Lordstown.

“We are not a virtual company waiting to build factories and sell cars; we are an actual company already building and selling cars around the world,” reinforced Ingenlath. “Our two award-winning cars are on the road in 14 markets globally and we expect our global sales volume to reach around 29,000 vehicles this year.”

Of course, 29,000 isn’t a massively ambitious number unless you take into account, for instance, the abysmal number of units EV startups have managed to sell and deliver. Lucid might have pre-orders but only started delivering the Air not long ago, years behind schedule. On the other hand, it’s quite an indictment of the sector at large that a CEO feels the need to assure people that, as a car company, it actually makes cars—and it wants to make a lot more of them. Polestar is projecting tenfold growth to 290,000 sales by 2025.