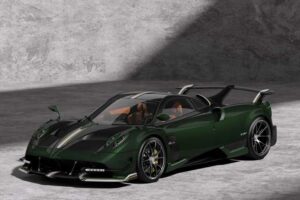 Remember the Huayra BC? It's getting even better

You hear the brand name ‘Pagani’, you probably think ‘Zonda’. We do as well. In fact, when we heard the news of the Huayra BC Pacchetto Tempesta, we had to remind ourselves of what the Huayra BC was – it has been over five years since it was revealed, and ten years since the original Huayra debuted.

In fact, this new car specifically marks a decade of the Huayra (yes, it really was debuted 2011), the first globally homologated Pagani model. As such, the Pacchetto Tempesta – that’s ‘Storm Package’ to non-Italian speakers – is to be unveiled at Monterey Car Week. Where else?

Designed to show off Pagani’s latest tech advancements, the Huayra BC PT (keep up) features new upgrades aimed at “further unleashing the car’s true racing attitude”. That means a new front splitter and dedicated intake to maximise aerodynamic efficiency, plus a new rear wing, six-pipe exhaust and upgraded suspension. This contributes to “enhancing comfort”, alongside a Soft Driving mode, something no one will ever select.

The BC is described by Pagani as the “most technologically advanced Huayra Coupe yet”, but compared with plenty of other hypercars on the market – think Ferrari SF90, Lamborghini Sian, Aston Martin Valhalla and so on – the Pagani remains resolutely old school. By that we mean, there’s no electric motors. Not even a sniff at a hybrid. The cylinders are aplenty, the battery packs are non-existent, and the gearbox is an automated manual. Pagani claims “more than 750hp” from the 6.0-litre twin-turbo AMG V12, plus 737lb ft.

Also at the event will be the world premiere of the Huayra R, its display showing off the all-new Pagani V12-R engine alongside the “driving thrill of a true racing car”, in line with the most stringent FIA requirements. So they’re taking it seriously.

If you find yourself in California over the weekend, pop down and check out the show – and send us pics.