Home » News & Features » 'Park 50 Feet or More Away' From Other Cars, GM Advises Some Bolt Owners

'Park 50 Feet or More Away' From Other Cars, GM Advises Some Bolt Owners 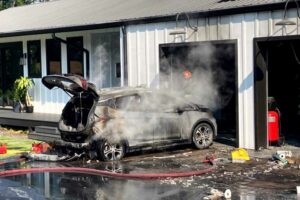 GM has had a hell of a time dealing with the Chevrolet Bolt. No automaker wants to build a car that catches fire at random, let alone sell 100,000 of them, all of which need to be recalled for repairs. That’s the situation GM finds itself in, however, and it only gets more awkward from there. The company has now been advising several owners to park an astounding 50 feet away from other cars due to the risk of fire, reports CNBC.

First reported by Bloomberg News, the advice is being given to customers who ring GM regarding parking their cars in parking structures or multi-story lots. GM spokesman Dan Flores stated in an email that “In an effort to reduce potential damage to structures and nearby vehicles in the rare event of a potential fire, we recommend parking on the top floor or on an open-air deck and park 50 feet or more away from another vehicle.”

Earlier in the recall, advice from the NHTSA was that owners should park outdoors, well away from other vehicles and structures. However, for many who live in apartments or in areas without street parking, this simply isn’t an option.

Of course, 50 feet is a long way; a full 15.24 French Yardsticks, in fact. Typical US parking spaces are 9 feet wide, meaning that owners are being advised to leave 6 parking spaces between their vehicle and any other car. That might barely be achievable in some parking lots that are under-subscribed, but it presumes owners would somehow be able to block out surrounding parking spots in a radius of the vehicle, not simply to the left and right as Bolts aren’t picky about which directions they throw out burning debris. There’s also the damage to the structure itself to consider, as well.

Owners perhaps could leave a sign on their vehicle that states “If You Can Read This, Your Car Is Too Close, Because Mine Might Catch Fire.” However, it bears noting that despite GM recalling all Bolts built from 2017 to the 2022 model year, we’re not yet seeing the cars bursting into flames on a daily basis. The automaker has confirmed 12 fires officially, though there are more unconfirmed incidents out in the wild.

With the issue coming down to defective cells produced by supplier LG Chem, GM hopes to receive some reimbursement from the company to help pay for the recall process. GM has already spent $800 million on the recall, and expects to spend at least $1 billion more since it expanded to cover all Bolts built up until the 2022 model years. Notably, LG Chem was able to come to an agreement to cover 70% of costs for a recall involving its batteries by Hyundai, so GM will likely be chasing a similar figure. The companies are working together to ramp up production of new cells to replace those in existing Bolts, and GM plans to notify customers as parts become available.

It’s likely we haven’t heard the last of this recall, as it will take quite some time for GM to deal with all the cars that need battery replacements. However, hopefully the lessons learned by GM and their battery manufacturing partner will avoid such costly issues in future.