Peugeot 306 Meridian | Shed of the Week 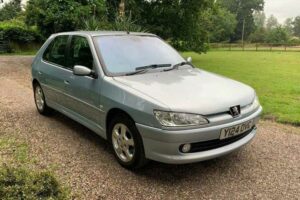 The 1.8-litre toting 306 was no GTI-6, but it still runs rings around its descendants…

Something for fans of old-school Peugeots this week in the shape of a car from the glorious days when products bearing the lion badge had functional suspension. The 306 was Peugeot’s Golf rival. Featuring neat styling by Pininfarina, it was built at (among many other places around the world) the old Rootes factory at Ryton near Rugby for nearly ten years. Peugeot had bought that plant for the notional sum of one US dollar from Chrysler, who used to make Avengers there.

Peugeot stopped making cars at Ryton at the end of 2006. Nowadays it’s a hub for Network Rail’s delivery service, which seems slightly sad to Shed who owns an ancient motorhome powered by a very reliable Talbot diesel engine that was most probably built there. Still, life goes on, and in a way Ryton’s fate was mirrored by that of Peugeot’s road cars. Post-Ryton and post-306, they went down the nick from a handling point of view. For proof of that, drive a 307 and then try and get a go in a 306 like today’s shed. You will be amazed.

We’re not told much about this car other than the fact that it’s a Meridian, which was the posh 306 with half-leather seats (half-shot on the driver’s side in this case). We’re also told that it has a 109hp 16-valve 1.8 petrol engine, and that it has done just 105,000 miles in its 20-year life. The MOT runs out at the end of July but the test history gives us no cause for concern. The record thus far indicates sparing short-journey use over the years, marked by the usual giveaways of old, cracking tyres and a rotting backbox.

Talking of which, Mrs Shed used to have one of these 306s. Hers was a D Turbo in Satanic Black. Underneath all the sweet wrappers, empty pickled gherkin jars and Ginsters pie residue it was a belting little car, but on the one occasion that Shed was forced to drive it he was shocked by the weight of the clutch. It needed a new cable presumably, but the huge amount of leg strength required to operate the clutch put Shed in mind of the purgatorial time he spent behind the wheel of a six-wheel drive Alvis Saracen in Malaya.

He volunteered for the Saracen driving gig because they told him that it had a Rolls-Royce engine, which it did, but the connection with R-R was a total travesty because the absurd weight of the clutch allied to the weird angles of all the other major controls made it almost impossible to drive the thing for more than half an hour at a time. The infernal racket it created was the final splash of wee on Shed’s chips.

Anyway, after driving his wife’s D Turbo and noting that she had never commented on the impossibly tough clutch, Shed made a mental note never to take her on in any kind of bum-kicking competition. Hopefully this 1.8 – a 5-door phase 2 which might disappoint the purists but perhaps please those with practicality in mind – won’t have that problem.

It might have others, like wonky windows, scrappy seat mounts and ailing air-con. Subframes rust too, but there’s been no mention of corrosion on any of this car’s MOTs. Suspension parts fail, but they’re so good when they’re working that you will take positive pleasure in renewing them in anticipation of the return of the wondrous new-car combo of pliant ride and obedient handling.

No reason to suppose it won’t get a clean pass like it did last year, and if that turns out to be true the next owner will be set for at least one more year’s pleasurable motoring with no whiff of stale pickle or electric meat to spoil the fun.