PLUS Seremban Utara toll closed till July 22 for EMCO – paultan.org 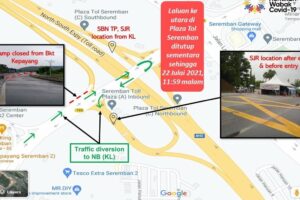 PLUS has announced the temporary partial closure of the Seremban Utara toll plaza till July 22. According to the North South Highway operator, this is under orders from the police.

There are a couple of blocks at the Seremban/Labu interchange. The ramp from Bukit Kepayang to the highway heading to KL has been closed. Traffic will be diverted to a U-turn ahead and will enter the highway via the ramp on the opposite side, where there will be a roadblock. Another roadblock has been set up for traffic coming in from KL.

Now that the Negeri Sembilan capital city is under the EMCO, make sure you have necessary approvals before attempting to enter/exit the place.