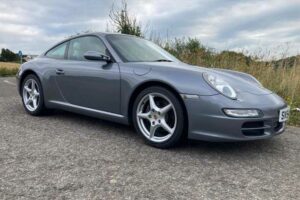 The 997 doesn't get much cheaper, older, or slower than this – perfect

There’s nothing like a new year to remind us all how old we are. Works for cars, too – stuff you could have sworn was recently out of production is actually far, far older. Take, for example, the 997 era of Porsche 911. The definitive modern 911 for many, the car that righted the wrongs of the 996 and continued to impress during the 991’s time is getting somewhat more senior. Over a decade has passed since production ended, and 2022 means it’s now 18 years since the first 997 was made.

Though a rather more significant anniversary for rowdy teenagers than classic cars, it’s proof that the 997 is now firmly nestled in modern classic territory; it isn’t the last 911, or something to consider instead of a new one. Seems daft to think of the 911 that ushered in PDK as old but, well, like the best of us, it ain’t getting any younger.

You’ll know the greatest 997s are commanding enormous money, by virtue of being fabulous driver’s cars as well as significant 911s. The later GT3s still list for as much as they did new, a 4.0 RS is half a million and even the Carrera GTS can cost as much as a new 992. Given the history and the current state of things, that seems very unlikely to change much anytime soon. Or ever, frankly.

This 997 isn’t a GT3, or a Turbo, or even a Carrera 2S for the matter. It’s a humble 3.6-litre Carrera manual, and is notable for a few reasons. This is one of the oldest 997s out there, registered in September 2004 and therefore just eight months from 18 years old. More than that it’s a really nice example, with some useful options (including electric seats, bi-xenon lights and Sport Chrono Plus), fairly low mileage of 82,000, and a ‘fully stamped’ service book. Apparently tended to regardless of cost, this 911 has had engine work earlier in its life to deal with bore scoring, and recent parts included four new Bridgestones and a full refresh of fluids. To all intents and purposes, it looks ready and raring to go.

And surely nobody needs reminding of the appeal. ‘Best of both worlds’ is a cliché, of course, but a 997 has an awful lot going for it: old enough to feel interesting but new enough to be useable, fast enough to be fun but entertaining at less than a million miles an hour, classically 911 but nowhere near the money of 20th century cars. You can see why they’re popular.

So much so that, even as the cars get older, 997 values are holding firm. Gone are the days of buying one for less than £20k (so well done if you did), and with modern sports cars migrating toward electrification, the charm of a millennial Porsche will likely not be lost on anyone. At the moment, higher mileage cars are for sale at £22k; this Carrera 2 is advertised at £25,995. Not the cheapest 997, Porsche, or early-2000s sports car out there, sure, but there’ll be far less satisfying ways to spend £25k on something fun for 2022. If anything, don’t hesitate: before you know it, the 997 will be 20 years old – and that won’t make them any cheaper.