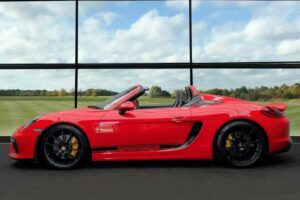 The clocks have changed, time to think sports cars. And they don't come much better than the 3.8 Spyder

In a way, it’s easy to feel a bit sorry for all three generations of Porsche Boxster Spyder, as there’s always been an equivalent Cayman hogging the headlines. The first was accompanied by the launch of the Cayman R, which had some commenters flustered that this Porsche R wasn’t another 800kg 911; then came the Cayman GT4, and not even a Boxster Spyder as good as the 981 was getting a look in against that; then the latest 718, despite first-time involvement from Porsche’s GT division, has never been the centre of attention. Blame the return of the flat-six GTS and the GT4 RS for that.

While this is all relative – nobody has actually forgotten about this trio of superb roadsters – the 981 Spyder in particular seems long overdue for a revisit. Because it could well be argued that it’s the best of the bunch, which would make it arguably the best Boxster ever. The roof was less complex than the 987’s yet the overall look perhaps even nicer than the 718; the 3.8 flat-six delivered performance beyond the original and is barely any slower than the current car; plus its manual-only status gives the 981 the sort of collectible cool the 718 and its PDK option doesn’t have. Quite a lot going for it, then.

Furthermore, while this era of Spyder didn’t get the full GT overhaul like its 4.0-litre replacement, the Boxster remains fantastic to drive. To all intents and purposes, it was a 981 GTS – already a great sports car – with more power, more torque, less weight and some minor suspension tweaks. Interestingly, this car was never offered with Porsche’s PASM dampers; like the manual gearbox, you took the passive set up or you didn’t have the car. Given how popular the option is, that was a bold choice by Porsche to really celebrate the Spyder’s old-school ethos.

Happily, the car drove beautifully anyway, even on the 20-inch wheels that made the Spyder look astonishingly good in the flesh. Factor in the howl of a proper flat-six and terrific, feelsome handling, and the model really did make for a fitting flagship to the already excellent 981 range. Assuming you could get one, there really weren’t many better way to spend £70k on a sports car.

And there still isn’t. The Spyder may not be talked about quite as fervently as the Cayman GT4, but values have remained strong. Though the current market situation will have helped its cause, it’s hard to recall any point since 2015 that a Spyder has been worth significantly less than its new price. Another reason owners love them. This one is a special spec even by Spyder standards, the first owner fully embracing the stripped-out, purist ethos by spending a lot of money on the ceramic brakes as well as the carbon seats. They even went as far as keeping the PCM infotainment system out – recouping £2k towards the PCCB and buckets, at least. If a Spyder is all about the driving, then nothing here will distract you from that.

Four owners have racked up almost 30,000 miles in this Boxster since 2015, which is an impressive tally – clearly the missing stereo didn’t put them off! It’s more miles than many of the cheaper GTS Boxsters of a similar age, and 10 times that of the other Spyder currently for sale on PH. Which means a handy saving – £67k for this one against £80,000 for the sub-3,000-mile car. And while the options added (as well as not added) for this specific car might narrow its appeal, the Boxster only needs one new owner from all the Porsche fans out there. You suspect they might be very happy indeed with their new car.