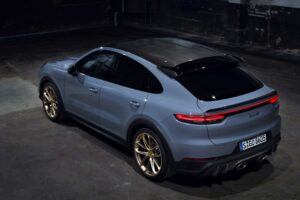 A couple of weeks ago, Porsche claimed the Nurburgring’s SUV lap record using a Cayenne without telling us exactly what version of the high rider had been deployed for the job. It was a new, as-yet-unreleased derivative, but now, we have a name – it’s the Cayenne Turbo GT.

Adopting one of Porsche‘s lesser-used badges (the last one was the Carrera GT and before that the 928 GT), the fresh variant is the new Cayenne range-topper. With 631bhp developed from a 4.0-litre twin-turbo V8, it doesn’t quite outgun the 671bhp Turbo S E-Hybrid, but that doesn’t matter since the GT enjoys a circa 300kg weight advantage thanks to the lack of battery and motor.

It’s not quite as powerful as the related Lamborghini Urus, but it is three tenths faster from 0-62mph, dispatching the benchmark sprint in a faintly ridiculous 3.3 seconds. The top speed is 186mph, making this the fastest production Cayenne Porsche has ever made.

As demonstrated by the brisk ‘Ring lap, though, the GT is about more than just straight-line speed. It gets a 17mm lower chassis, every component of which has been re-engineered in the name of better handling. The power steering and rear-wheel steering have been fettled, the three-chamber air suspension is 15 per cent stiffer, and all of the electronic systems are tweaked.

There’s a smidge more negative camber at the front (0.45 degrees), and the Porsche Torque Vectoring system is a tad more aggressive than before. Rounding off the chassis changes are some 22-inch wheels wrapped in Pirelli P Zero Corsa tyres.

To go with the wheels, the GT gets a raft of aesthetic tweaks. These include a new front bumper with bigger side air intakes, a contoured carbon fibre roof, black wheel arch flares and a roof spoiler that looks fantastically silly on an SUV. We’ll allow it.

Inside, you’ll find the usual generous helping of Alcantara, along with perforated seat centre sections and either Neodynme or Arctic grey accents. The finishing touch? GT embossing on the headrests. Lovely.

It’s comfortably the most expensive Cayenne, coming in at £143,910 in the UK. Still, that’s a lot less than a Lamborghini Urus, for something which looks less…challenging. The GT is available only in four-seater ‘coupe’ form.