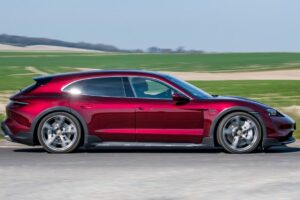 Whichever Porsche Taycan you go for, you won’t be wanting for performance. Even the entry-level rear-wheel drive Taycan is good for 404bhp. Some examples, however, have been hit by a problem that sees precisely zero horsepower delivered to the wheels.

The manufacturer is recalling all Taycans – ‘Cross Turismo‘ estate included – built before June 2021 over a sudden power loss problem. “There is the possibility that in certain instances a shutdown of the power train, resulting in loss of motive power may be triggered incorrectly and sporadically,” the manufacturer said in a press release.

The brakes and steering are still functional if this happens, so it’ll be easy enough to bring the car to a safe stop. In any case, owners are unlikely to experience the issue – Porsche says just 0.3 per cent of the 43,000 cars covered by the recall have been afflicted by the glitch.

In the UK, around 4500 Taycans are being recalled. Wherever you are, the remedial work involves a simple software update that takes around an hour. This has to be done at a dealer rather than over the air since a powertrain controller calibration is necessary, Car Throttle sister publication Auto Express reports.

The Audi E-Tron GT, which uses the same platform and powertrain as the Porsche, hasn’t escaped. Since it came along a lot later than, though, only a small number will be recalled. In the UK this amounts to just 58 cars, 46 of which are already sorted.