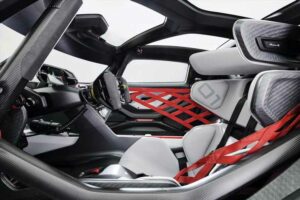 It can feel sometimes like there’s so much 3D-printed stuff out there that the next bit of news will be a 3D-printed 3D printer. But some developments are more interesting than most; into that category we’re going to file Porsche’s new 3D-printed seats.

Well, that’s the headline anyway. These are still conventionally made, Race-Tex-clad bucket seats, truth be told, with only the central section (the backrest and parts of the cushion) produced using a 3D printer and clipped into place. Then it gets really interesting, as the technology – previewed in the recent Mission R concept – means three different rigidity grades can be offered, “to suit the customer’s specific needs”.

So those who want to feel like they’re a Supercup driver all the time can go for maximum rigidity, while those content with merely the trackday look can keep it relatively relaxed. Not only should the new seats provide additional support and a slightly lower driving position, but they also look really cool. Oh yes, and they’re more than eight per cent lighter than conventional buckets. So don’t go wearing your heaviest hoody in them.

Now, Porsche being Porsche, having a partially 3D-printed seat in your new sports car doesn’t come cheap. At the moment a German price of 2,677 euros is being quoted per seat, which is around £2,267. If it helps soften the blow, the technology can also be fitted to pre-owned cars, all the way back to the earliest 991 911s and 981 Boxsters – your local OPC can do the job in “just a few minutes”. The seats will be available to order on new builds from February, when they’ll join the configurator as well – by which time there will also be six different coloured inserts to choose from. Just in case the Porsche options list wasn’t long enough…