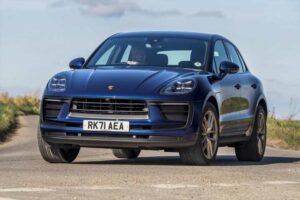 We wouldn't blame you for disregarding the entry-level Macan. But there's still much to appreciate…

I’ve just read a report from the UK Chamber of Commerce stating that supply chain issues continue to cause inflation. Oh dear. In other words, everything from carrots to cabbages are shooting up, but not in the way you’d hope. It struck me that this isn’t news to car buyers, who have seen mad inflation for years. The M3 is a case in point. In my head that is a £50k car, but now it’s pushing £80k. It’s a fabulous thing, no question. But that does feel a bit, well, rich.

Then I was scooting through the price list for the recently refreshed Porsche Macan range, and I noticed that the entry-level car is sub-£50k. That seemed – and take this with the pinch of salt it’s intended – almost cheap. Until you realise, you’re buying one with just two litres and four cylinders, not six. Which begs the question: do you need anymore? Is a four-pot Macan a deal breaker or a deal maker? Plenty of customers think it’s the latter: the Macan and Macan S are neck-and-neck in the sales charts, with the GTS not too far behind.

The £6k saving over the next rung up the ladder, the 2.9-litre V6 S, is mostly thanks to the fitment of Volkswagen’s venerable turbocharged EA888 engine. It’s an engine I cannot seem to get away from at the moment, having been writing recently about both the Audi SQ2 and Skoda Kodiaq vRS. Each wormed its way into my heart to a degree, which bodes well for the Macan, but the Porsche badge naturally brings with it more expectation, and, despite a post-facelift power hike from 245 to 265hp, the Macan is still not as powerful as the smaller SQ2.

Its 265hp feels just about enough, though. As always, the EA888 delivers it all in a dependably linear fashion; just not a tremendously exciting one when you compare it with the V6 S. In essence it feels a little bit flat, which has as much do with the difference in how the two engines rev – the EA888 being less outlandish towards the top end – as it does the gulf in their 0-62mph times (it’s 1.5-seconds slower than the V6 S). And then there’s the noise. Now I am not saying the EA888 is coarse or grating in any way – but, let’s be honest, what would you prefer: a chorus of four or six?

If the noise isn’t very ‘Porsche’ the PDK gearbox most definitely is, although you wouldn’t always think so in the driving. At times, it behaves much like the Volkswagen DSG which is more commonly bolted to this engine, with an occasional unwillingness to downshift manually. There’s also the hint of driveline shunt as you move away. But in every other respect the PDK performs as you’d expect because when the gearshifts do come, they’re are smooth and keen, whether orchestrated manually or with the gearbox dialling them up itself.

So far then, it’s a bit of a mixed bag. But when you delve into the chassis’ capabilities the Macan magic is still there. It’s such a capable SUV and, don’t forget, we’re talking about a car that’s been on sale since 2014 and was built from the underpinnings of the now defunct, first-gen Q5. Yet when it comes to ride and handling, the modest proportioned Macan is still a big daddy in the SUV world, and, if anything, far from diminishing its abilities, the entry-level version improves them marginally thanks to the reduction in front end weight. It’s amazingly accomplished at knitting together corners. Perhaps, being picky, the steering could have a touch more weight around the straight-ahead and, yes, the column isn’t exactly over endowed with feel at the rim. Once you’re past those first few degrees, though, the weighting comes good and the gearing is spot on, making the Macan feel agile and accurate on the road.

Obviously, that eggs you on, and when you start pushing it harder you also get to marvel at its body control. This is where you notice the difference between something more affordable from the VW Group. It’s so measured in its vertical movements and unwaveringly steadfast no matter how much the road surface heaves beneath it. And, for the record, this car wasn’t running on PASM or air suspension. It was as it comes, with standard steel springs and regular dampers. Nor did it have the Porsche Torque Vectoring Plus box ticked – yet it still tucks in to corners neatly with a lift and squirms playfully at the rear (when you loosen the ESP) and squirt it on the way out. The only thing you notice here is the engine’s relative lack of torque, which means you have to be heavily committed to throttle openings to unstick the back tyres.

Regardless, it’s supremely comfortable – and in all settings. In many respects the driving position is great, too. Highlights include the degree of fore and aft adjustment to the steering wheel, so you can position it ‘just so’ and the seats, which are still comfortable even after extended stints behind the wheel. One issue is its bulging transmission tunnel – a historic problem that nudges your left leg over to the right and confirms that the platform you’re sitting on predates MLB. Another aspect of the Macan’s recent facelift are the touch-sensitive buttons that now adorn the centre console. They certainly tidy up the look of the interior no end, if at the expense of usability. While the old-style buttons may have looked confusing, you soon learned what each one did and how to find it by feel. You’ll never find touch-sensitive buttons by feel.

Do you need any more than this 2.0-litre variant, then? Well, I’ve thought long and hard about that, as you’d expect. And certainly this isn’t just a pastiche Porsche built cynically to milk the materialistic – who I doubt are reading this anyway. Those of you that are will be happy to hear that even in entry-level format, the Macan hits the spot with its sweet suspension set-up and adjustable handling, making it not just something to swagger about in, but something to enjoy, too. Granted, anyone about to rush off to bag one like it’s another Black Friday deal will have to do so in the knowledge that it’s missing some welly and fruitiness from the exhaust. But you’ll probably need to drive one back-to-back with the fuller-fat V6 S to really appreciate what you’re missing.