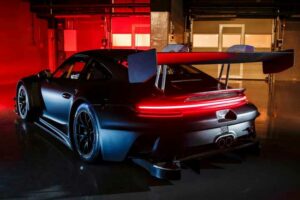 Another day, another 911 variant, right? However the GT3 R is a little more significant than most, as the racing version of the 992 that will compete in GT championships across the globe. It’ll sit below the RSR when it arrives and above the recently launched Cup in the 992 hierarchy, and will aim to repeat the considerable success of the 991 predecessor. There weren’t many, if any, sportscar grids across the globe that didn’t have a GT3 R somewhere near the front. A pair of victories in the past five years of the N24 points to that.

But GT racing is extremely competitive (the Audi R8 LMS has also won two N24s since 2018), and so it’s time for the 911 to be updated once more. We don’t have the full reveal just yet, which is set to follow later in the summer, but it’s hard to ignore a racing Porsche that looks and sounds like this. And you thought the GT3 RS was bold!

Notable in the latest Twitter teaser is what’s missing, Porsche suggesting the new GT3 R has a ‘?-litre’ flat-six. Normally these racing cars use a version of the 4.0-litre found in the road car, though this ambiguity implies the R might use the 4.2 that was previously exclusive to the mid-engined RSR. Anyone with greater knowledge of homologation requirements or Porsche plans speak now – sounds tremendous, though, whatever kind of flat six it is.

Plus, as is so often the way with GT3 cars, the 992 looks utterly outrageous, low and wide and moody as hell in matt black. New for this era of GT3 R are the swan neck rear wing, then sort of bigger everything else: intakes, diffusers and flics all appear to have grown over the previous generation. No doubt aerodynamic performance will be further improved against the 991, and a GT3 R this wide looks jolly hard to overtake as well.

Following the debut very soon, we can expect the 992 GT3 R on the world’s racetracks for the 2023 season. Teams representing Audi, Lamborghini, McLaren and AMG will be eagerly awaiting it – and don’t forget there’s a new Ferrari 296 GT3, either.

Just in case that wasn’t enough to be getting your teeth into, Porsche has also announced this: a one-off roadgoing 911 GT3 based on the 911 GT3 Cup. Built to promote the manufacturer’s bespoke Factory Re-Commissioning service, the car features a custom livery intended to celebrate 30 years of Porsche Supercup. What better way, eh?