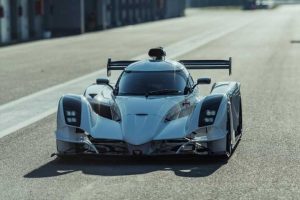 Remember the Praga R1? Way back in 2015 it was a car we drove in roadgoing ‘R1R’ form, the Renault-powered track star nothing if not intriguing in a market typically dominated by the British firms. Combining a 670kg kerbweight with more than 350hp guaranteed thrills, of course, but there was real quality to both the drive and the construction. The R1 proved its credentials as a racer, too, winning the 2020 Britcar Endurance Championship. For 2021 the motorsport R1 is back, overhauled and upgraded in an attempt to make it even more competitive.

Though a familiar silhouette from before, every single carbon panel of this 2021 car is new, with a claimed dry weight of just 643kg. Considerable attention has been paid to the R1’s aero, as well, with an entirely new floor, diffuser, splitter and rear wing. Praga reckons this not only makes 15 per cent more downforce, but also reduces drag by five per cent.

While the engine remains ostensibly the same 2.0-litre turbo four-cylinder, changes to the software are said to “improve throttle response and produce a smoother power curve with a much wider window.” Peak torque is now over a broader rev range, which Praga believes will complement the revised aero to make the R1 more competitive against the heavier but more powerful rivals on circuits with long straights.

Additional tweaks are all aimed at making the R1 better suited to endurance competition; its fuel tank is now 50 per cent bigger, at 92 litres, the headlights are more effective in dark or wet conditions and Praga even claims that just one mechanic can sort out set up and maintenance. Being so light of course has benefits for endurance racing, too, with less fuel used and reduced stress on consumables.

It should come as little surprise, then, that this updated R1 will compete in a dedicated category of the 2021 Britcar Endurance Championships. From this, Praga is hoping to launch a one-make series next year. Until then, though, the first of the new cars are now being delivered ahead of this season, Praga’s UK partner VR Motorsport having campaigned the R1 for four seasons now.

“We are excited to take to the track in March and once again race the Praga R1 to victory”, said team owner Vincent Randall. Orders placed now will be ready for the summer, though prices haven’t been revealed. Given that roadgoing car was 200,000 euros in 2015 and used racers are still offered at £150k, it’s quite comfortably going to be a six-figure sum. Still, the best race cars never came cheap, did they?