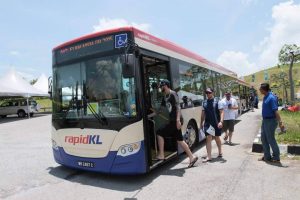 Rapid KL has announced three trial bus services starting from today till April 1. The E250, E300 and E600 routes take commuters from the suburbs to KL city on weekday mornings, and back home in the evenings.

There are two buses in the AM and two after work, only from Monday to Friday (no service on weekends and public holidays). The routes have limited stops to reduce the journey time.

The E250 route is from LRT Wangsa Maju to BSN Lebuh Ampang in the city. Stops along the way are UTAR main gate, CIMB Genting Klang, BSN Genting Klang, HKL (west), HKL (south), Chow Kit market and the Pertama Complex. The two morning buses depart LRT Wangsa Maju at 7am and 7.30 am, while the evening buses depart Lebuh Ampang at 5.45 pm and 6.15 pm. End-to-end journeys are expected to take 35 minutes, but this is of course depending on traffic conditions.

The two morning buses depart Sri Nilam Hub at 6.30 am and 7am, while the evening buses depart BSN Lebuh Ampang at 5pm and 5.30 pm. End-to-end journeys are expected to take around 40 minutes, depending on traffic conditions.

The two morning buses depart the Puchong Utama terminal at 6.20 am and 6.45 am, while the evening buses depart Pasar Seni at 6.15 pm and 6.45 pm. End-to-end journeys are expected to take around 45 minutes to an hour, depending on traffic conditions. Click on the images above and download them for reference if you’re interested in trying out these special rush hour buses.