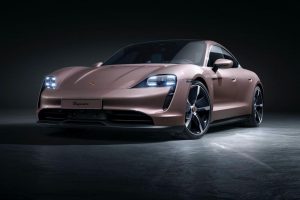 If this Porsche Taycan looks jolly familiar, there's a reason for that: when the rear-wheel drive car was launched in China last year, it was shown in exactly the same dusky pink colour. Now, fresh from its Guinness World Record for EV powersliding, the two-wheel drive model – called simply 'Porsche Taycan' – is now on its way to Europe.

With the standard 79.2kWh battery, the new model produces 326hp, or 408hp on overboost; consumption is rated at 28.0kWh per 100km, and it has a charging capacity of up to 225kW. As in the Taycan 4S, though, this Taycan's battery can be upgraded to the two-deck Performance Battery Plus, rated at 93.4kWh; this boosts nominal power to 380hp and the overboost maximum to 476hp, with consumption up a fraction to 28.7kWh per 100km and an increase in charging capacity to 270kW. Interestingly, though range predictably increases with the chunkier battery – offering 484km (300 miles) instead of 431 (267 miles) – it doesn't have any effect on performance: both rear-drive Taycans hit 62mph in 5.4 seconds and top out at 143mph. Porsche also claims that both battery options, when hooked up to the right charger, can be charged from five to 80 per cent in 22.5 minutes.

With the RWD car ostensibly identical to the rest of the range inside and out, the other noteworthy factor for this Taycan is the technology. Most notably that's in the new Plug & Charge function, said to allow "convenient charging and payments without the need for cards or an app"; which sounds like the recipe for electric driving nirvana, with charging commencing as soon as the cable is plugged in. That said, it will need a compatible charging station, so we're not entirely done with phones and cards just yet. In addition, the options familiar from the rest of the Taycan range – upgraded brakes, air suspension, the non-leather interior and so on – are available on this 'entry level' car.

The new Taycan will be in dealerships from the middle of March, with UK prices starting at £70,690 – a substantial saving over the £83,367 a 4S costs. In fact, it's so much less that it means undercutting the new M3, confirmed last week at £75k. The BMW is more powerful, sure, but you wouldn't bet against the Taycan giving it a good run for its money in a comparison. One to revisit in the spring, that's for sure.