Rear Wings Don't Work Great on Convertibles, As It Turns Out 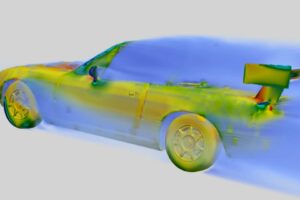 Aerodynamics are a vital part of any vehicle’s on-track performance, or more practically, its effective range in everyday use. It’s no secret that convertibles, thanks to their upright windshields with no roof behind them to smooth the airflow, are big offenders when it comes to drag. Many performance cars are convertibles, though, so how does adding something like a rear wing affect these vehicles specifically?

Truthfully, if you have a convertible race car, you’re gonna wanna position your rear wing a bit differently. At least, that’s what some simulations by ex-F1 aerodynamicist and current YouTuber KYLE.ENGINEERS say. Thanks to some work in computational fluid dynamics software, he was able to visualize the impact of a convertible’s specific aerodynamic properties on a rear wing, and the results aren’t pretty.

Kyle’s software is able to simulate both the airflow around the car and the pressure acting on the vehicle’s various surfaces. In this case, the car is a first-generation Mazda Miata. He tested the MX-5 in several configurations; however, the big takeaways have to do with rear wing efficiency, and the effectiveness of smaller rear ducktail spoilers when the roof is on or off.

The numbers don’t lie; as compared to the Miata with a hardtop fitted, the top-down car lost a massive 43 percent of its total downforce when equipped with the same wing. As Kyle explains, it’s because of the dirty low-velocity air stemming from the back of the windshield running onto the aerodynamic device. It also must be said that this loss was limited due to the current wing’s sheer size. Much of the outboard portions of the wing sit outside this dirty air, which is why the loss, although very significant, didn’t cancel out the aerodynamic structure’s effect more dramatically.

The engineer then goes further into analysis, stating that this same principle relating to the effectiveness of a rear-mounted aerodynamic device extends to any vehicle with a low-velocity area behind the passenger compartment, not just convertibles. If a car is creating a low-velocity region of turbulent flow around an aerodynamic device like a wing or spoiler, it’s not going to work nearly as well. This is what happens on the hardtop Miata, with its relatively upright rear windscreen creating enough flow disturbance to reduce the effectiveness of an already weak duckbill spoiler. Of course, with the hardtop removed, the little spoiler might as well not even exist. 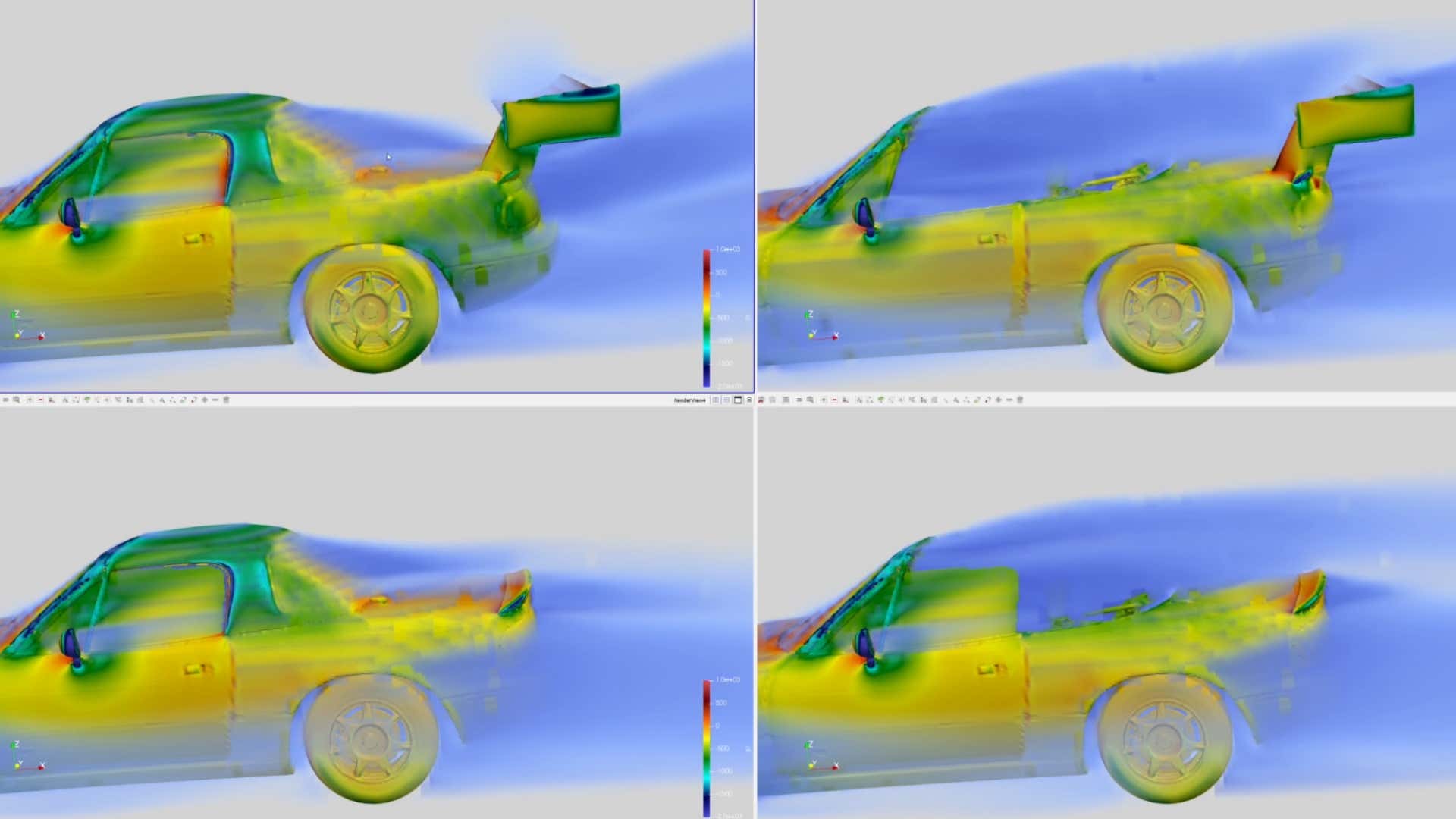 Above, you can visualize these various configurations in CFD. Clearly, the windshield is really messing with the flow around the rear of the car, almost completely enveloping the rear wing in turbulent, low-velocity air. And as mentioned above, even with the hardtop equipped, the little duckbill spoiler isn’t seeing much clear air either.

These issues could be remedied in a few ways, as Kyle explains. The obvious solution is to mount the rear wing much higher on the back of the car to get it out of the dirty air. The more elaborate solution, though, is to fit the car with a fastback hardtop that covers more of the trunk area. That way the flow can be smoothed, the rear wing can say where it is, and perhaps the smaller trunk-mounted lip might even start pulling its weight. If you’re curious, below you can see the surface pressure differences on all of the devices with the top up and down. 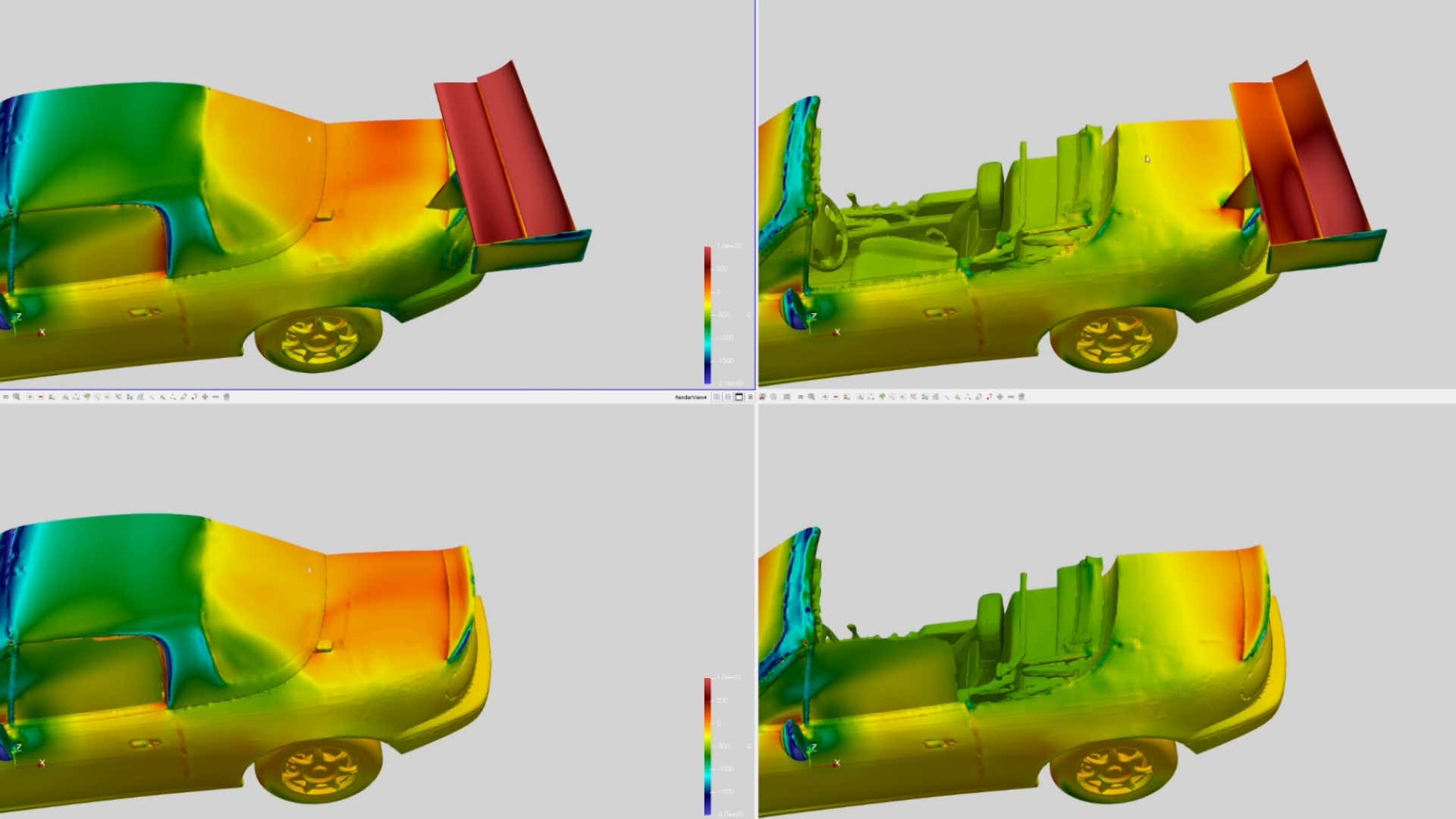 The high pressure on top of the wing’s elements is much stronger and more consistent with the hardtop fitted. With it off, you can see where the edges of the wing outside of the turbulence are trying to claw back a little bit of downforce.

It’s worth noting that the wing produces a fair bit of drag in the process of pressing the car to the ground, and this is reduced with the top down. So if you’re trying to save some fuel in your convertible with a wing that’s questionably effective, you should drop the top. That will effectively stall it and send you on your way. Just putting the top down without a wing will increase drag, however.

So if you’ve been racing in a convertible with a rear wing that’s totally shrouded by the front windscreen, you’re probably gonna wanna put your top up. Of course, it will depend on the car, and you can design your wing to account for the windshield drag, but that’s a good generalization. In any case, fancy new carbon wings are expensive, and it’s best to make sure it’s gonna work first before shelling out the cash for it. Watching more of Kyle’s videos is a great place to start.