Replacing the front crankshat seal & radiator of my 1998 Jeep Cherokee 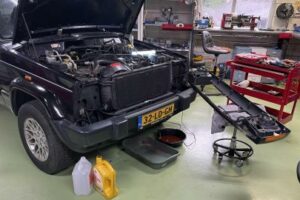 I will also install a new harmonic balancer, thermostat and water pump.

BHPian Jeroen recently shared this with other enthusiasts.

I want to replace the front crankshaft seal because it’s leaking. As it requires pulling the front pulley off, which is also the harmonic balancer I will replace that as well. I figure once every 25 years a new balancer is not a luxury.

Next, I want to replace the radiator, because it has two leaks. Tiny, but that will always get worse. Whilst I am doing that I will also replace the thermostat and the water pump.

I started with the crankshaft seal and pulley a couple of days ago. I am taking parts off in a bit of odd order. That is because I know I will have to take the radiator and other bits off later. Also, I want to see from an early moment, if possible, if I can see any trouble ahead. Sure enough, there was trouble!

First things first. Always disconnect the battery when doing big jobs on your car. My special battery connectors come in very handy for that purpose. Next, let’s have a good look at these new parts that need fitting. I bought the appropriate puller earlier, I got some extra bolts to go with it that fit in these odd threaded holes. But I need to push the new crankshaft seal in as well. Don’t have a real tool. So I look for something circular that is big enough. This is just as I had just started. I have already removed the electrical fan on the left-hand side. 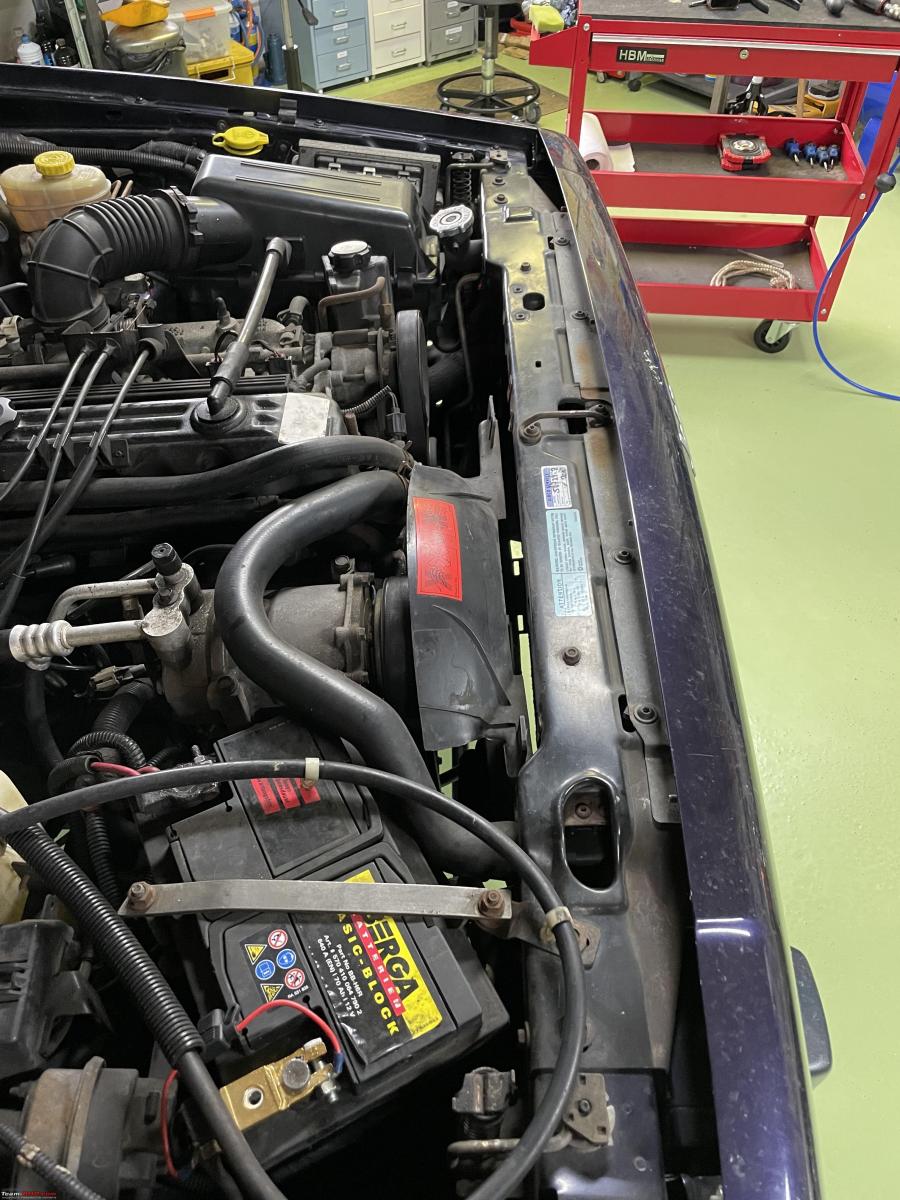 These are pretty straightforward jobs, even so, I try and study them in the manuals I have and look them up on Youtube.

The official Jeep workshop manual, only shows how to extract the seal during a complete engine out. We are nog going that way. I am going to extract it, with the engine insure. Just like everybody does, and also shown in the Haynes manual.

Here I have already removed the large support beam on top of the radiator. What surprised me were these little rubber idolaters on top. It all looked very rusty and I had doused them in rust remover.

The one on the left was ok-ish. But the one on the right snapped right off. As it would! Not the thread, but the complete central pin. Here you see the underneath of the support I took off, you can still see the remains of the central pin of the isolated. Simply pulled out of the rubber. 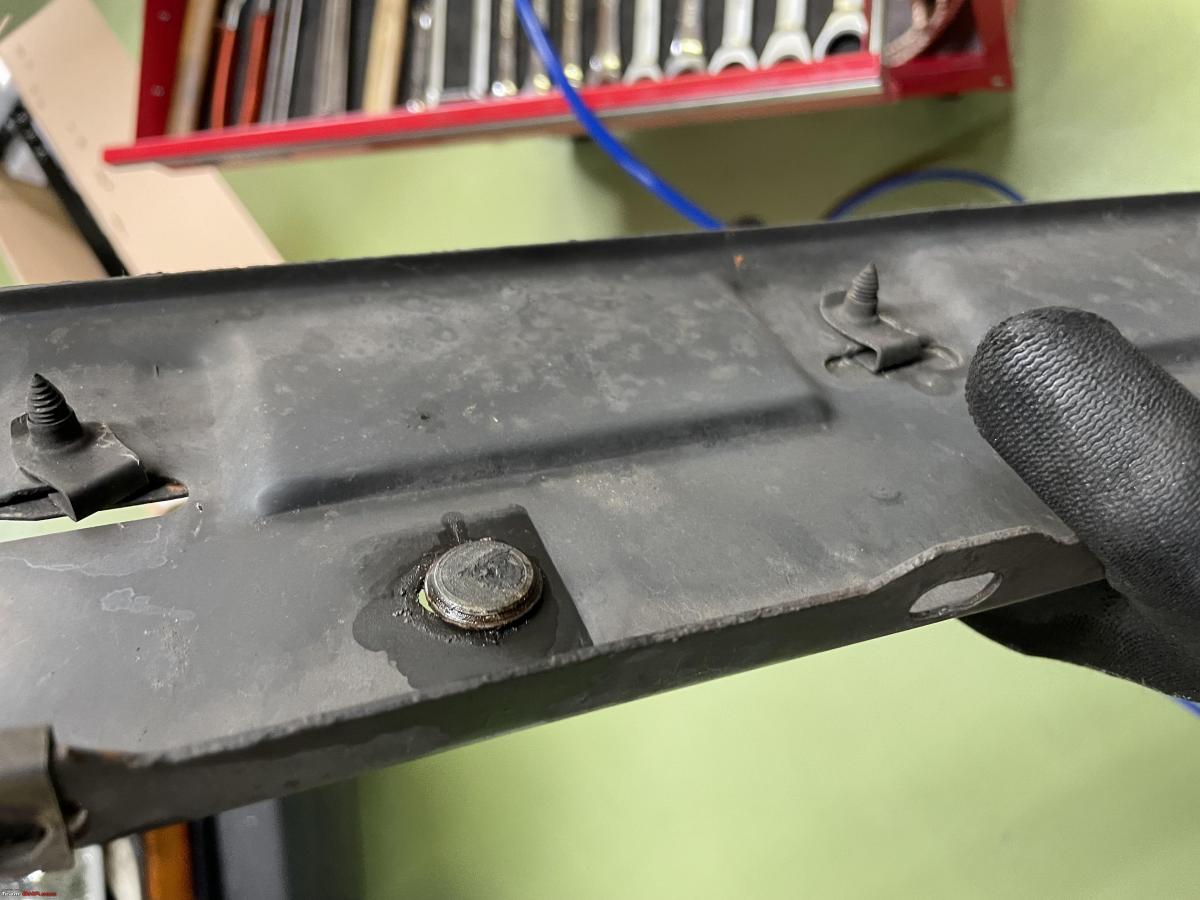 If need be, I could probably salvage this one. But I found two new ones on Bay and ordered them. Might take 10-15 days to arrive. If anything I will fix and install the old ones and replace them with the new ones when they arrive.

The new radiator does have a different configurator for these idolaters. But I think they will still fit. 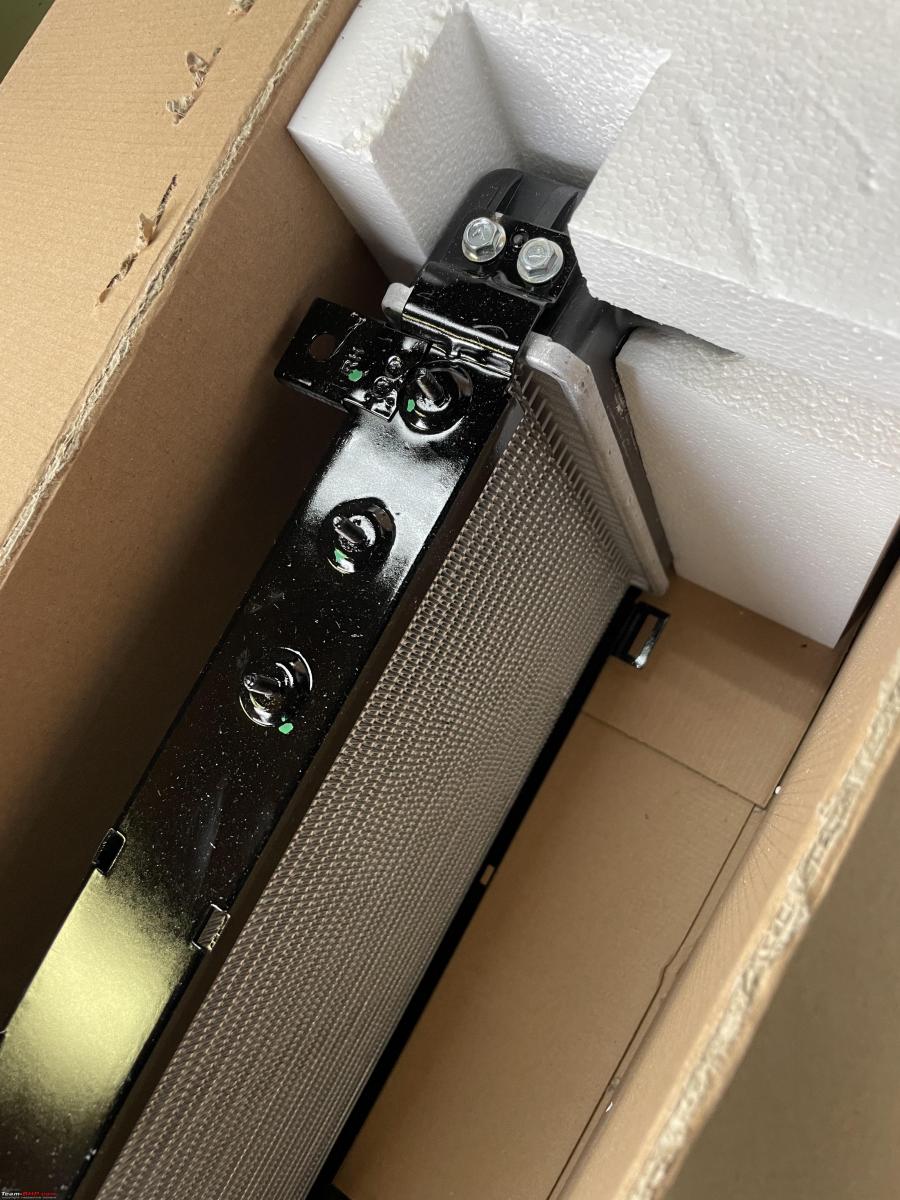 I had to take the complete front grill off as well. For no other reason, it’s the only way to get at the little drain cock. It’s hidden otherwise. And as I am working inside my garage, I really need to be a bit careful in extracting the cooling fluid, don’t want 8 liters of the stuff all over my garage floor. So I am going to find a hose, hook it up to this little drain cock and try and drain as much coolant into containers as I can, before undoing hoses and such. I had a few worries. One of them being the quick connector on the lower transmission line. The problem with these quick connectors is, that they simply seize over the years. And then it becomes a quick break connector as you end up breaking the end of the tube off.

With the grill and other bits out of the way, I started spraying it very liberally and frequently with penetrating oil. No way you can get at this connector with everything in place. Good news, the upper transmission line came off very easily without any problem.

I had to take the drive belt off, obviously. So one thing you need to do is to double-check the routing of the belt across the various accessory drives, pulleys, tensioners and whatnot. I take lots of photographs, just in case. 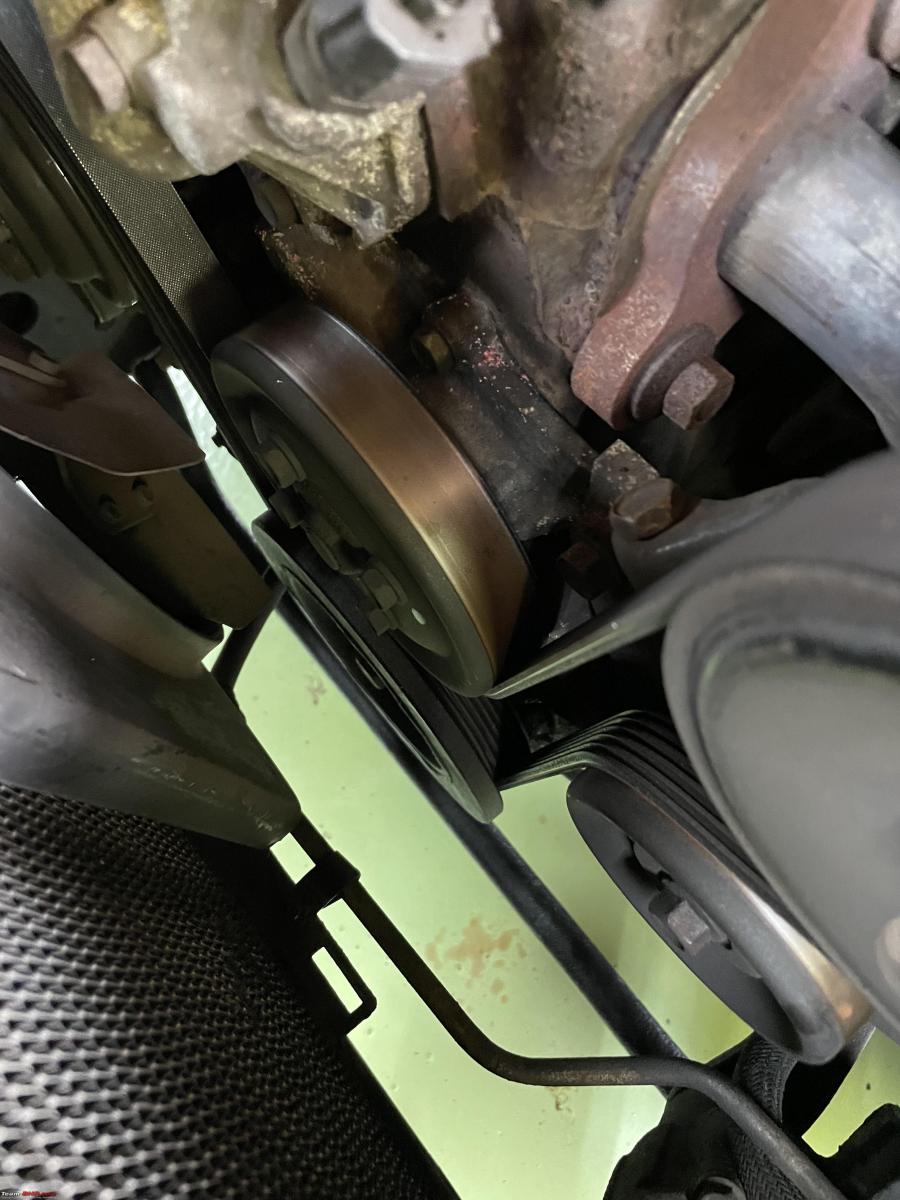 It’s just a question of loosening the tensioner and taking it off.

This is a seriously long drive belt!! I inspected it very closely. I can’t find anything wrong with it, so it goes back on for now. Here we are, with some more things out of the way, we are beginning to get access to the pulley/harmonic balancer. In order to get access, I had to lift the shroud of the other fan (can’t take it off) and move the upper transmission line out of the way. The transmission line is packed in plastic-wrapped with lots of tapes, to prevent any leaks. First thing is to get the central bolt out of the pulley. That bolt is tightened to 108 Nm and is not going to budge easily. Problem is you will rotate the engine crankshaft before it breaks loose. I tried various ways to immobilise the crankshaft. In the end two bolts in the pulley and a tire lever though it, gave me enough leverage to undo the central bolt with a large socket wrench. 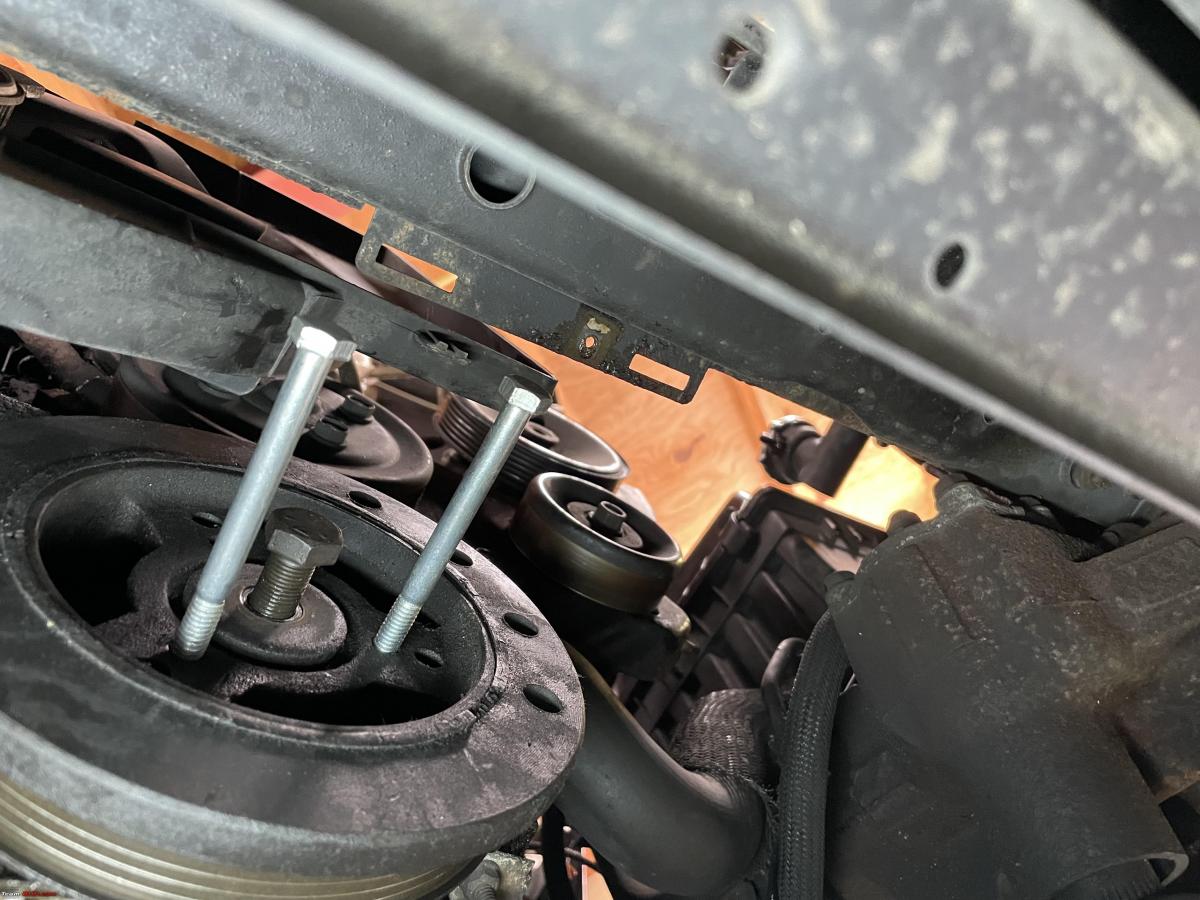 Next is getting the puller ready to do its job!