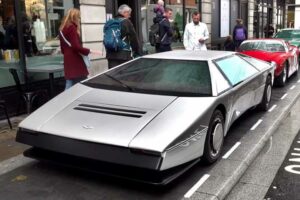 The Bulldog is a rare concept that highlights just how mad Aston Martin was in the 1970s and 1980s. Once designer William Towns was done penning the luxury Lagonda sedan, he moved on to draw up the Bulldog, a mid-engined supercar designed to hit 200 mph. From the beginning, the one-of-one concept faced a difficult life and never quite hit its goals. The only existing example has now been restored, however, and was recently spotted on the streets of London by YouTuber TheTFJJ.

As reported by Motor1, the car was seen with good company, next to a Zagato-styled Bentley Continental GT as well as a Bizzarrini 5300GT Strada. However, it was the angular Aston that got most of the attention, looking unlike anything else this side of a Tesla Cybertruck. Where the Tesla looks like some kind of gamer meme, though, the Bulldog somehow represents the aesthetic ideal of a culture on the cusp of a computing revolution.

The Bulldog sported a 5.3-liter Aston Martin V8 engine, pushed to its limits with twin Garrett turbochargers—a cutting edge setup for the time. Like so many early turbo engines, compression was low at just 7.5:1, though the engine ran a healthy 13 psi of boost. Early Bosch fuel injection replaced the Weber carburetors typically fitted to Aston Martin V8s at the time. Rumors talked of power figures reaching 700 horsepower, though the engine was typically run at a lower 600 horsepower figure for the sake of reliability.

Weighing in at a hefty 1750 kg, the Bulldog didn’t quite crest its 200 mph target in testing. An attempt in 1980 at the MIRA test track hit just 191 mph, reportedly running with only 400 hp at the time. Aston Martin had theorized the car could achieve 237 mph at full steam, though the project was canceled shortly after when Victor Gauntlett purchased the cash-strapped company in 1981.

After changing hands a few times over the years, Victor’s son, Richard Gauntlett came to own the car and set about its restoration. The car made its first appearance back in its original color and condition this summer at the Hampton Court Concours of Elegance. Now seen on the road, it’s clear that the Bulldog is running and driving, with everything from its power gullwing doors to the folding headlight shroud in operating condition. The latter is a particularly interesting note, and one wonders if the extra drag created with the lights on would slow the Bulldog from its top speed.

The growl from the engine is one of a throaty V8, though we only hear it idling in this video. The Bulldog is later loaded on a truck once the gathered crowd parts. Flat chat, one would expect a jet-like wail from the twin turbos along with the roar from the exhaust. Very much a manifold your grandad might have made.

With the restoration work completed by Classic Motor Cars in Bridgenorth, Gauntlett is keen to have the Bulldog finally achieve its original 200 mph goal. Aston Martin Racing driver Darren Turner will be behind the wheel, and hopefully, give the Bulldog the treat it deserves after 40 long years. We’ll certainly be watching for that one.