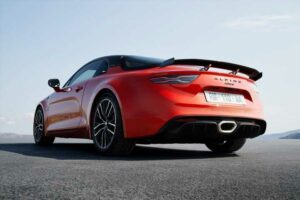 Lineup refresh adds more torque, too – although updated infotainment might be the gamechanger

Newsflash! It’s all change at Alpine. No, not the driver line-up at the Formula One team – Fernando Alonso and Esteban Ocon are still locked in for next year – but rather a complete reshaping of the road car line-up as of December 1. We’ve only just group tested the latest Légende GT, and already that is gone. Now the 2021 (and 2022) range is comprised of A110, GT and S.

What does this actually mean? Well, not a huge amount for the entry-level A110. Even though the Pure name has been dropped the ethos hasn’t. Its unladen weight tips the scales at 1,102kg (up only very slightly on the 1,098kg quoted for the Pure), it has the same 44:56 (front to rear) weight distribution, 17-inch wheels and the more compliant ‘Alpine’ suspension. The 1.8-litre turbocharged engine is also unchanged, with outputs sticking at 252hp and 236 lb ft. As before, they are deployed though a seven-speed Getrag dual-clutch auto.

There is one almighty boost, though: the infotainment system. This may not feel like a huge story when we’re talking about a sports car but, believe me, the old system was so terrible that it’s a genuine advantage to anyone intending to use their A110 as a daily. The screen size is still 7-inches but, finally, it comes with Apple CarPlay and Android Auto. So whether the new software is any good or not (over-the-air updates are now available), you will at least be able to bypass it and use your phone’s much more intuitive platform instead. As before, live telematics are available (standard on the S) that show boost pressure, gearbox oil temperature, steering angle, power and torque etc., plus a lap timer for any track days you’re planning.

Naturally, the new infotainment system also appears in the GT and S models, but they also add a bit more excitement with enhanced outputs of 300hp and 251lb ft (the Légende GT and S peaked 292hp and 236lb ft). That higher peak torque figure comes in 400rpm high up the rev range than before (at 2,400rpm) but it’s a decent hike and contributes to a healthy drop in the 0-62mph time ­- from 4.4 to 4.2 seconds. And apparently when you’re attempting to replicate that time using launch control, the system now deactivates one of the engine’s four cylinders to ‘release more racing-style sounds.’

The GT adds a sports exhaust, Brembo brakes (with 320mm discs at the front), 18-inch alloys with Michelin Pilot Sport 4 tyres, but, as was the case with the Légende GT, retains the standard suspension. The S continues as the more track-orientated model, with hollow anti-roll bars that are 100 per cent stiffer and 50 per cent stiffer spring rates. The ride height is also reduced by 4mm and the rear suspension geometry has been tweaked. Options for the S include Cup 2 Connect tyres, sports seats trimmed in faux suede and the option to add a harness. It’s also available with an aero pack that adds a carbon front splitter, boot spoiler and larger strakes on the diffuser that divvy up 141kg of available downforce. When you add the aero pack, the top speed is increased from 155mph to 171mph.

How about pricing? Well, so far we’ve only seen figures in Euros and converting them into GBP suggests a revised pecking order. Previously, the Légende GT was the most expensive A110 at £61,655, but the GT mirrors that, and, at today’s exchange rates, it’s coming out at £58,500. That means that the the S is now the most expensive trim, pushing £60,000, while the entry-point A110 is roughly the same as the outgoing Pure, at £50,000.