Home » News & Features » Road trip to the mountains in my 1st automatic car, the Hyundai Alcazar

Road trip to the mountains in my 1st automatic car, the Hyundai Alcazar 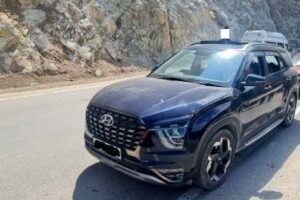 I was a little skeptical about driving the automatic in the mountains because I have always driven a manual till now.

BHPian Kulvinder recently shared this with other enthusiasts.

Just completed a 1050 kms road trip in Alcazar 2.0 AT Signature 7str. Out of 1050 kms, 550 kms were in mountains / hilly terrain and the rest on highways. The trip was from Delhi to Gurudwara Shri Hemkund Sahib in Uttarakhand.

The car performed very well. The handing was superb in the hilly terrain even at a slightly higher speed. The body roll was negligible and could be felt only if you push the vehicle on the corners. The comfort of the car is very good.

The first leg of the journey was from Delhi to Rishikesh on 30th of Sept. The journey was very fine and the fuel economy at the end of the journey was 14.5kmpl as per the trip computer and stood at 14.06 by tank full method. The A/C was on all the time. The NVH level is so good that you get absolutely no sound inside the cabin while cruising patiently at 90-100 KMPH.

Next morning started from Rishikesh to Govind Ghat, about 20 kms ahead of Joshimath. As this is my first automatic vehicle, I was a little skeptical about driving the automatic in the mountains because I have always driven a manual till now. But the performance was flawless. The power was available whenever required thanks to the 2.0 NA engine. The A/C was switched off. There were many patches of bad / under construction and broken roads due to landslides. But the jerks felt inside the cabin were minimal. The car was able to swallow the bad roads nicely.

There is a lot of buzz around the trio beam headlight of the Alcazar that it is not adequate, and I have seen people going for after-market modification for the headlight or even getting additional lights fixed from the aftermarket. Although I’d driven Alcazar at night earlier also and didn’t feel the headlight inadequate, but this was time to see the throw and spread on the hills. It was dark when we reached Joshimath. But I found the headlights to be good in throw and spread and never felt like they are inadequate. The throw of the high beam was also good. I have no complaints about the headlight whatsoever.

There is a lot of construction / repair work going on in this route. We had plans to drive till Rishikesh by night but, as I didn’t want to drive late at night, were open to stopping at Srinagar if we reach there by 10 – 10.30. Google showed a traffic jam of about 45 minutes on our way. The ETA to Srinagar was shown as 10 in the night. So, we thought we would stop at Srinagar and start the onward journey the next morning.

Somewhere in my mind, there was doubt that Google is showing 45 minutes jam but, it could be worse. There are people who don’t want to maintain the queue and cause the blockage for the traffic coming from other direction. But when we reached the point from where the road work was being done (only one lane was functional and the other was closed for repairs), we were among the first 10 vehicles in the queue. Our lane was stopped for about 25 minutes and only the traffic coming from the other side was allowed. I was furious that why they are giving this much time to the traffic from the other side and not giving the same duration to both sides. But I could see the massive line of vehicles which was not coming to an end.

It was 10.30 in the night. Kids were already asleep. The ETA at Rishikesh stood at 12.30, so, decided to reach Rishikesh for the night stay. Reached Gurudwara in Rishikesh at 12.15. The room was easily available and called it a day after driving for 10 hrs. The fuel economy for this 520 kms drive was 10.5KMPL by tank full method.

Next morning, started from the Gurudwara Sahib at about 10 in the morning. Reached Crystal world, Haridwar at about 11. Spent 1.5 hours there and had a nice brunch. Started at 12.30 from crystal world and reached home at Paschim Vihar in Delhi at 3.30. The Fuel economy as per MID was 16.0 KMPL.

The boot appears to be very small and with very little usability, but we were able to fit in 1 big, 1 medium and 1 small bag very comfortably in it without folding the last bench. Other luggage was placed inside the cabin, and we didn’t find any problem with the space. We were two adults and 2 kids for the trip.