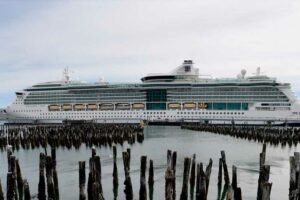 Ever feel like you just have to get away for a bit? Man, the other day my editor told me to remove a semi-colon from a post about Bronco markups and I just about popped a blood vessel in my forehead. That animal, I thought to myself. I gotta get the hell out of here. I gotta get on that nine-month Royal Caribbean cruise or I’m gonna go postal.

Oh, you haven’t heard? Yes, Royal Caribbean plans to launch a cruise that will last a whopping 274 days. It will set sail in December 2023 and arrive back home from where it started in Miami by September 2024. There will be stops along the way; that said, there’s no guarantee this won’t turn into some Lord of the Flies type deal after the bartender announces the last Miller High Life has been shotgunned in celebration of an upset victory on the deck-mounted go-kart track’s 24-hour endurance race. They say the fast corner is just like Eau Rouge.

Anyway, the 2,746-passenger Serenade of the Seas is set to stop in more than 150 destinations all over the world, with highlights including Japan, Egypt, Italy, Russia, and more. At every stop, the crew are expected to blunt the tips of the steak knives a little bit more. Just to be safe.

Tickets, according to a Royal Caribbean spokesperson speaking to USA Today, will start at $60,999 and range up to $112,000 per person. That’s for a nice little envelope-sized room with no windows right next to the engine that sounds like 100,000 cars cranking over on a cold day and produces about a trillion tons of CO2 per second. In all seriousness, the cruise line does not state what kind of room sixty grand gets you. you’re gonna end up living there for nine months, though. Maybe you should take out a title loan for a little extra cash, or something. Just to be sure you’re getting a suite with a window and a nice strong door other passengers can’t break through—even if you control the last stockpile of shrimp scampi. Just walk home when your car gets repossessed.

“Now more than ever, people have resolved to travel the world and make up for lost time,” Michael Bayley, president and CEO of Royal Caribbean International told USA Today. “Royal Caribbean is making that a reality with the ultimate vacation that welcomes those seeking adventure and exploration to taste, dance and dream with us around the world.” Strangely, Bayley did not mention anything about how many hostage negotiators would be boarding along with the ship’s usual security.

Royal Caribbean requires proof of vaccination in order to board one of their cruises from a U.S. homeport, so unless some new rather muscular Coronavirus variant decides to materialize throughout the course of the cruise—let’s be real, that might just happen here—everyone should be safe. Children under 12 do not require vaccination, however, but anyone who wants to bring a kid under 12 on a nine-month cruise is absolutely insane anyway. If they’re under three, Royal Caribbean’s website says many ships feature a space where “trained professionals” can look after them. When they age out of that, good luck. There’s no school on board so let’s hope you brought some old National Geographics.

Royal Caribbean’s website does not mention a penalty for stealing a lifeboat to escape an alcohol-induced bout of tribal war on account of who got the bigger half of the panko-breaded chicken finger, so if things do get out of hand you can at least take your chances with that. Pick a calm day near somewhere you wouldn’t mind spending several years in extradition limbo and you should be all set.

Man, this plan is really coming together for me. Kyle, if you’re reading this, one more pitch refusal and I’m really gonna do it.