Home » News & Features » Rs 3 lakh: New or used bike alternates to upgrade from a RE Himalayan 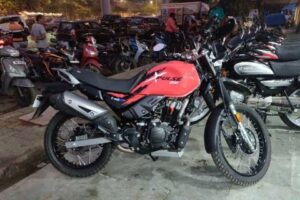 I prefer ADVs to road-oriented motorcycles, but at this point, I am open to both kinds of options.

BHPian karanddd recently shared this with other enthusiasts.

I sold my Himalayan yesterday and I am already thinking of what motorcycle to get next. I am moving to a new state (GA) and taking my DL-registered motorcycle there, paying road tax again, etc. were things I did not want to do. Maybe I could have gotten away just riding around, I don’t know. Another reason for selling is that I had begun to find the Himalayan a little cumbersome and not very amenable to zipping around. But maybe that’s only because I was mostly riding in the NCR region, with tons of traffic to contend with.

For my next motorcycle, I both want something nimble and lightweight, but also decently powerful. I prefer ADVs to road-oriented motorcycles, but at this point, I am open to both kinds of options. My budget is 3 lakhs give or take. I am open to used motorcycles, which broadens the search a bit.

Motorcycles I am considering:

I love the Xpulse (I own one in Nepal) and the 4V seems nice, but I am afraid of the downgrade in terms of power and am worried I’ll find it boring to ride on the curvy roads in South India.

Feels like a natural upgrade from the Himalayan. Like the twin-cylinder engine a lot. Cons are weight (even heavier than the Himalayan) and I am not particularly drawn to its looks.

In my view the better-looking RE 650. The same concern about weight.

Looks nice. Seems decent power-wise. Con is the poor front suspension travel (is it all that bad?) and the fact that it feels unexciting. Why would I not just get a Gixxer 250 naked instead?

Not considering the Adventure because it’s literally a Himalayan copycat. Again power appears decent. Cons: I heard in one video the kerb weight is over 190 kilos, no idea whether that’s true, but if so, the 30-odd bhp is not good enough to compromise and get a pig. Poor service network, no idea re. reliability, yet to see one in the flesh (in Delhi!)

Wouldn’t it be daft to sell a Himalayan and buy a Scram? Or would it? It reduces weight, which was my main grouse with the Himmie, but by how much really? Does it translate to the saddle at all? No idea. I do like how it looks. Con: Old wine in a new bottle to some extent, feels a little foolish.

Not at all a fan of how it looks but I am enticed by its low weight and good power figures. I am a relatively large guy (6 feet 90 kg+) so not sure whether it would be too small or uncomfortable. Cannot take anyone as a pillion. Cannot go off-road. But on curvy roads, I’m sure it’ll be wonderful. Also pushes my budget by a fair bit.

My brother lives in GA and has a Duke 390 which he hardly rides so it’s as good as mine. Do I want the same engine et al with more plastic cladding? I like the ADV 390 kind of but feels too samey still with the Duke. Is the ADV 250 significantly lighter than the ADV 390? I’d give that a look then. Online it says the weight is the same.

The Xpulse right now is the most likely candidate as it’s the easiest on the wallet and will let me save a good deal of money. In the future I can play with the rally kit, I can off-road a bit, etc. I have no doubt I’d enjoy it. But two Xpulses in two countries? Hmm.

I will take test rides of all these motorcycles, but unless I get good, long test rides, I feel that I end up getting more confused than certain when I do quick 10-15 min runs. That is, I end up liking something or other about everything I ride, and it’s not a long enough duration for the truly bad things to come up. In another world, maybe I’d be getting the CRF 250 or something similar. But as that cannot be, I am keen to hear your thoughts and hope to make up my mind soon.

Here’s what BHPian amvj had to say on the matter:

The general rule is, to go for a higher-power motorcycle than the current one so that you will not get bored quickly. This is particularly applicable for low-powered motorcycles. Your list contains almost every genre of motorcycles maybe except cruisers. If I were your height I will not worry about the weight of the motorcycle that much.

Here’s what BHPian GreasyCarb55 had to say on the matter:

These 2 bikes would be my top contenders for a Himalayan 411 replacement.

The Interceptor 650 would be a great upgrade. The 650 parallel twin is (IMO) THE best engine you can buy under 5 lakh and the weight difference is about 2-3kg over the Himalayan once you get it moving I don’t think you’ll feel the weight as much as the Himalayan. If you’re touring I’d get the premium touring seat as some say the stock seat is too soft for touring. 3 lakh should be enough to get you a well-maintained Interceptor 650 with less than 5000-6000km on the odometer. If you want to spring for a new one in Goa it would cost approximately 3.4 lakh (Single Tone), 3.5 lakh (Dual Tone) and 3.7 Lakh (Chrome) on-road Goa.

You can go for the Adventure but since a new 390 ADV is almost 4 lakh brand new (on-road Goa), good examples on the used market with low mileage would be around Rs 3.3 – 3.4 Lakh and at that point, you might as well buy a brand new Interceptor or Duke 390.

The Continental GT is manageable in the city and for shorter rides (some practice required if you’re not used to bikes with clip-on handlebars but it can be done) but I don’t think it would be good as a Himalayan replacement. A company called Zana makes handlebar risers for the Continental GT but I don’t know how well they work.

Unless you can get a Honda CRF300 Rally through private import the XPulse 200 4V is possibly THE best bike in the Indian market for pure off-roading and is a good tourer but would feel like a downgrade over the Himalayan.

Here’s what BHPian neil.jericho had to say on the matter:

karanddd, since you already have an Xpulse, I would suggest that you look at something different. Since you have a fair budget, you should get yourself a much better bike at this time.

You haven’t mentioned what sort of riding you will do, so it is a little difficult to pinpoint a specific bike for your use case. If its all-round usage of commuting, weekend rides plus some touring (which is what most of us do), then I would say