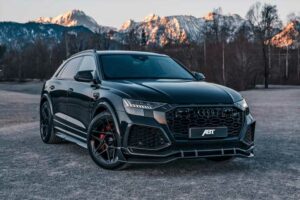 Concerned the new Aston DBX707 might be too subtle? Abt proposes a limited-edition solution…

You might recall the launch of something called the ‘Johann Abt Signature Edition’ last year – it was the tuner’s RS6-shaped love letter to its founder, and while reaction to it was inevitably mixed, we quite liked it. Obviously it was a bit Marmite in the looks department, but that’s part of Abt’s remit. Ditto the 800hp teased from the twin-turbo V8, which meant the limited-edition model could romp to 124mph in less than 10 seconds. Its maker called its performance ‘revolutionary’. Hyperbole, yes. But understandable.

The 2022 follow-up, using the same tweaked 800hp 4.0-litre unit, is described by its maker as a ‘Racing Utility Vehicle’ – a contradiction in terms likely to have any right-minded PHer reaching for the rage key. Our knee-jerk reaction was no different, of course – although we will temper it slightly by saying (perhaps whispering) that the standard Audi RSQ8 was definitely not unpleasant to drive. In fact, it was more likeable than a Lamborghini Urus for quite a lot less money.

Naturally the RSQ8 Signature Edition is going to be quite a lot more money. Abt declines to mention a price in its press release, but by dint of it limiting production to just 96 examples – modified at a rate of no more than eight per month – you know it’s going to be absurdly expensive. And also brazenly fast. The tuner reckon its Power R upgrade (including specially developed turbocharger and intercooler) is good for 738lb ft of torque and 0-62mph in 3.2 seconds.

No less silly is the 195mph top speed claimed for this concrete elephant. Apparently the electronically controlled air suspension has been tweaked with something calling itself ABT Level Control, which we assume means dropping it as low as possible over the enormous 23-inch forged rims once you’re in motion. The 295/35 monster tyres are unlikely to enhance the RSQ8’s ride quality, but Abt does promise ‘safe road holding at all times’ – which is probably what you’d want in a car that tips the scales at 2.3-tonnes even in sympathetic trim.

Obviously the ‘extensive’ aero kit is not sympathetic. “Signature Carbon Bold” was apparently the motto for a large number of add-on parts, including the front splitter, blades, bumper, grille, sills, door strip, rear skirt and spoiler. The result might actually be less attention-getting than the Johann Abt Signature Edition – but it’s still intended to extract shock and awe from passersby.

Inside you get an additional smothering of Alcantara and carbon accents, and, as you might expect in a Signature Edition model, Abt seems to have embossed its logo on any surface of sufficient size. What you might not expect is the time capsule in the centre console that contains a fragment of Johann Abt’s first winner’s trophy, which the founder’s grandson once won on the grass racecourse in his hometown of Kempten. A slightly curious detail, but potentially manna from heaven for the Audi uberfan this RSQ8 is intended to hoover up.