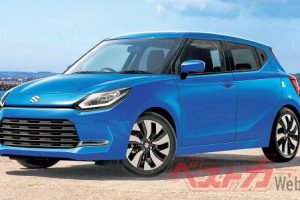 The new Swift could be offered with a 1.2L petrol hybrid powertrain.

According to a media report, the fourth generation Suzuki Swift will make its global debut in 2022, following which, Maruti Suzuki could introduce it in the Indian market.

The fourth generation Swift will reportedly be based on an advanced version of the Heartect platform. The car is expected to get a cosmetic refresh, however reports indicate that the changes won’t be revolutionary. The interior could feature a larger touchscreen head-unit among other updates.

In the international market, the new Swift could be offered with a 1.2-litre petrol hybrid powertrain, the details of which are still unknown. Besides this, Suzuki is also likely to offer a 1.4-litre turbo-petrol engine.

In India, the car is expected to get the same 1.2-litre Dualjet petrol engine as the current model. It produces 89 BHP and 113 Nm and comes paired with either a 5-speed manual or 5-speed AMT.