Sage Karam may have one podium finish in 19 starts in the real NTT IndyCar Series, but he now has a virtual win to go along with it.

The race was broadcast on YouTube and Twitch, complete with full commentator coverage. Karam earned pole with a lap of 1:25.065, beating Felix Rosenqvist to the spot by seven-tenths of a second. Both drivers are experienced with iRacing and that gave them an advantage over drivers who just set up their sim racing wheels earlier in the week.

The 2013 Indy Lights campion scored a career-best third at Iowa Speedway in 2015 but, to date, has never celebrated a win.

“It was nerve-wracking there at the end, for sure,” Karam said referring to a late-race near-miss with Indy Pro 2000 champion Kyle Kirkwood, who was subbing for Andretti Autosport’s Ryan Hunter-Reay in the No. 28 DHL Honda. “That was a little too close for comfort (in turn 10), a (scary) moment. I didn’t know which way he was going to go when he started to spin, so I had to quick rely on some instincts and picked left, and thankfully it was the right choice.”

Karam is one of the most experienced iRacing drivers in the virtual Indy field and gave a shoutout to his rivals who spent a great deal of time leading up to Saturday’s event practicing.

“It was a lot of fun, and it was great that we could give the fans something to watch,” he said. “It’s the only sport that (the world) can really do right now. I’m happy that I got the win for Wix Filters and Dreyer & Reinbold Racing. The car looked pretty good out front, so hopefully when we get to real racing, we can replicate that.”

The virtual field featured many of the drivers who are expected to compete in the series once it gets underway later this year. In addition, the field featured drivers such as Scott Speed, seven-time NASCAR Cup champion Jimmie Johnson and two-time Australia Supercars champion Scott McLaughlin.

McLaughlin, who is hoping for a start with Team Penske in IndyCar this year, put on a good show and finished fourth; Johnson, who has said he is retiring from full-time NASCAR competition after this season, and has expressed an interest in competing in IndyCar in the future, ran inside the top 10 for a time, but had to overcome a first lap tangle with several drivers, including Alexander Rossi, and later a spin. He finished 16th. Popular IndyCar driver James Hinchcliffe, who is scheduled to run part time this season and will be working with NBC Sports, had a technical glitch and never started the race. Robert Wickens who is still recovering from a 2018 crash was also scheduled to race, but his equipment didn’t arrive in time. Both are expected to compete next week.

The second of six events will be held next Saturday, April 4, on the virtual Barber Motorsports Park circuit at 4 p.m. ET and streamed through IndyCar’s YouTube and Facebook platforms as well as iRacing’s Twitch.

The remaining races will be held weekly each Saturday through May 2 at a “Driver’s Choice” track (April 11), a “Random Draw” track (April 18), Circuit of The Americas (April 25) and a non-IndyCar “Dream” track (May 2). 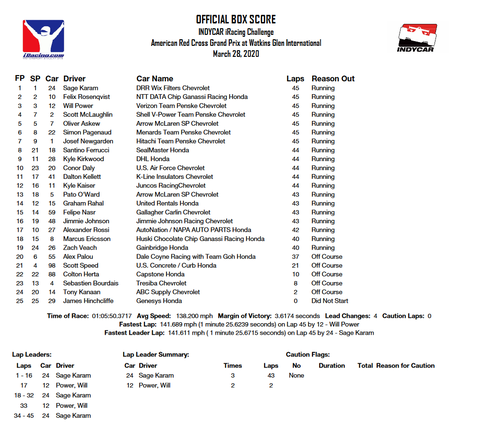