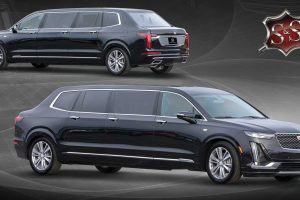 Not too sure what to feel about this.

It’s a bit unsettling that there’s a close connection between carriages to after-life, otherwise known as hearses, and luxurious limousines with near-infinite legrooms. Then again, that’s the reality of it, and Sayers & Scovill (or the S&S Coach Company) is one of those builders that customize and build hearses and limos from existing Cadillac vehicles.

S&S, however, just announced a new product to be added to its portfolio. Called the 2021 Cadillac XT6 Presidential Limousine, it’s based on the Cadillac XT6 crossover, obviously, but it looks all sorts of weird.

If you’re having a hard time finding what’s weird about this limo, well, just look at the rear. It’s going to be hard to unsee that and we’re not entirely sorry at all. The proportions look odd, and that’s because it’s literally an after-thought to add a trunk to this stretched crossover. We’re having a hard time processing this, actually, but it reminds us of the first-generation Suzuki Swift Dzire – the sedan version of the Suzuki Swift sold in Asia, or more accurately a hatchback that has been awkwardly grafted with a trunk.

Then again, it’s an official offering by Sayers & Scovill and they take pride in it, saying that it’s “an industry exclusive trunk for distinctive styling and maximum functionality.”

Meanwhile, Cadillac is reportedly working on an XT5 hearse and limousine, with details emerging just recently. Don’t worry, the stretched XT5 wasn’t given a trunk, or at least that’s what the previous spy shots show us, but yes, you may now start getting used to seeing a stretched Cadillac SUV.

We’re not going to ask you to let us know what you think about the S&S XT6 Presidential Limo because we know you would, so fire away in the comments section below.