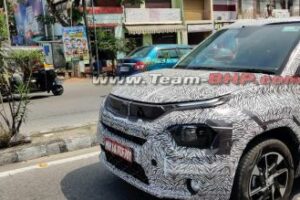 The Tata HBX will compete with the Maruti Suzuki Ignis and the upcoming Hyundai Casper (AX1).

Tata Motors seems to be gearing up to launch the Hornbill (HBX) as we have learned that production has already started and the first batch of cars is ready.

The Tata HBX is based on the ALFA platform which is shared with the Altroz. The crossover is likely to be offered with a 1.2-litre petrol engine producing 85 BHP and 113 Nm. Higher variants of the car might get a turbocharged 1.2-litre motor, while transmission options are likely to include a 5-speed manual and 5-speed AMT.

The production version looks very similar to the HBX Concept that was showcased at the 2020 Auto Expo. The exterior styling is based on Tata’s Impact 2.0 philosophy. The car has a Harrier-like front fascia with slim LED daytime running lights on either side of the grille and headlamps positioned lower down on the front bumper.

The Tata HBX will compete with the Maruti Suzuki Ignis and the upcoming Hyundai Casper (AX1).

Thanks to the Team-BHP fan (he prefers to remain anonymous) who sent this information in. Heartfelt gratitude for sharing it with other enthusiasts via this Team-BHP share page!

END_OF_DOCUMENT_TOKEN_TO_BE_REPLACED

Building one’s entire understanding of cars around cheesy early-2000s action flicks can do some strange stuff to your brain. Like, […]