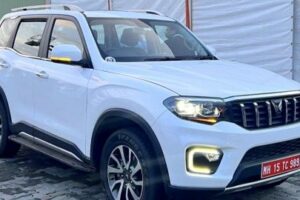 The black & brown cabin is a more practical option as compared to the beige or white upholstery in the Safari or XUV700.

BHPian NitSat recently shared this with other enthusiasts.

I accompanied my brother-in-law and fellow BHPian Cool-Shine to check out the newly launched ScorpioN. He is seriously considering Scorpio N.

I own Tata Safari 2021, and these are my observations about the new Scorpio N, purely in comparison with Safari 2021.

We went to NBS showroom at Malad Link road. There were a couple of potential customers ahead of us. But within 10 -15 minutes, a demo car was made available to us. That was a top-end diesel automatic TWD.

The front is humongous. The bonnet is imposing even in comparison with the Safari. M&M, for a change, has not gone overboard with the design elements and that gives a mature look to the car. Somewhat similar to the Fortuner. They had demo cars in white and black shades. I particularly liked the white shade, which has shiny elements, giving a more premium feel to it.

The side profile is similar to the classic Scorpio.

The rear however looks abrupt and plain. The front two third looks much better than the last one third (which looks like a work in progress). I mean Safari looks elegant and proportionate, from whichever angle you look at it. But looks are purely a subjective parameter.

The black and brown cabin is a more practical option as compared to beige or white upholstery in Safari or XUV. Maintenance should be relatively easy. The cabin height is good.

However, I felt the driver bay was a bit cramped as compared to my Safari. A heavily built person may find it inadequate, especially the seat width. However, the knee room is good in front (unlike the Safari where the left knee constantly touches the central console). The dead pedal is adequate. A lot of soft-touch material on the dashboard.

The infotainment system is definitely a lot sleeker, as compared to the archaic one in Safari. Even though we could not check out all the functions in our ten-minute test drive, but the touch response was very good.

Middle-row seats are equally comfortable in both Safari and Scorpio N. Three average size adults can be easily accommodated in the middle row and leg room is more than adequate.

The third row of Scorpio N was universally panned by everyone, but I found that for short journeys, average size adults can definitely travel. However, absolutely no under-thigh support and minimal leg room will make it the least desired place in Scorpio N. The Safari scores over Scorpio N here, because of the sliding second row, making it more user-friendly.

The driving position is commanding. It offers a complete view of the bonnet. Push the Start button, slot it in D mode and wow. The car just blows you out. The instant power delivery brings a smile to your face.

Compared to the hydraulic steering of Safari, the electronic steering feels so easy to drive, especially at low speeds. It makes manoeuvering and turning a lot easier than Safari.

In a strictly ten minutes, 1.5 km test drive, I could not assess some critical details like highway manners, high-speed stability or brake adequacy. I felt the steering was too light in terms of feedback and sincerely hope that it weighs up proportionately at high speeds. The body roll is well contained in a BOF behemoth of this size, at least at lower speeds.

Scorpio N comes with Micro hybrid technology. So when you brake, the engine comes to a standstill and it restarts as soon as you touch the accelerator.

This feature is similar to the Auto hold function in Safari. But the only difference is, in Safari the auto hold puts the car in the idle position, rather than a complete standstill. But in bumper-to-bumper city traffic, repeated start-stop in Scorpio N will put more burden on the engine and will also reduce the FE considerably I feel.

We all know it’s negligible in both Safari and Scorpio N. However, the bench seat of Scorpio N doesn’t have a 50-50 split. Also when folded, it goes vertical, thereby reducing the boot space a bit more. The boot floor becomes uneven leaving a small trough in the floor, after the bench seat is folded. So loading and unloading the heavy bags will be a bit of a task here. In Safari, the third row folds completely flat (well almost).
The side opening tailgate is definitely a lot easier as compared to Safari where the tailgate is heavy and the opening button is not easily accessible.

The build quality, the fit and finish of materials and finesse (or rather lack of it) are equally comparable in both cars.

The Scorpio N is the taller car of the two. The higher GC is evident while getting in and out of the car.

Overall Scorpio N is a very promising vehicle. It’s the best option under thirty big ones, for someone looking for a 4WD, comfortable five-seater with luggage or a seven-seater for short family drives.