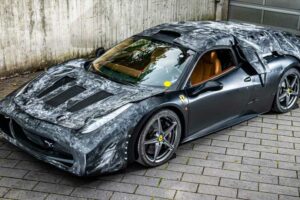 The Ferrari LaFerrari, along with the McLaren P1 and Porsche 918 Spyder, marked a turning point in the evolution of the supercar. Pure internal combustion made way for the hybrid powertrains coming to the fore in the quest for ultimate performance. Now, one of the LaFerrari development mules is up for sale at RM Sotheby’s, providing a glimpse into just how Ferrari’s first-ever hybrid came to be.

The LaFerrari was internally referred to as the “F150” during development, a confusing moniker that nonetheless followed on from the “F140” destination given to the preceding Ferrari Enzo. This particular mule was termed “M6” but don’t get mixed up. It was actually the first test mule, suggesting the M6 designation was purely to make sure it was mistaken for a BMW as well as Ford’s best-selling pickup truck. 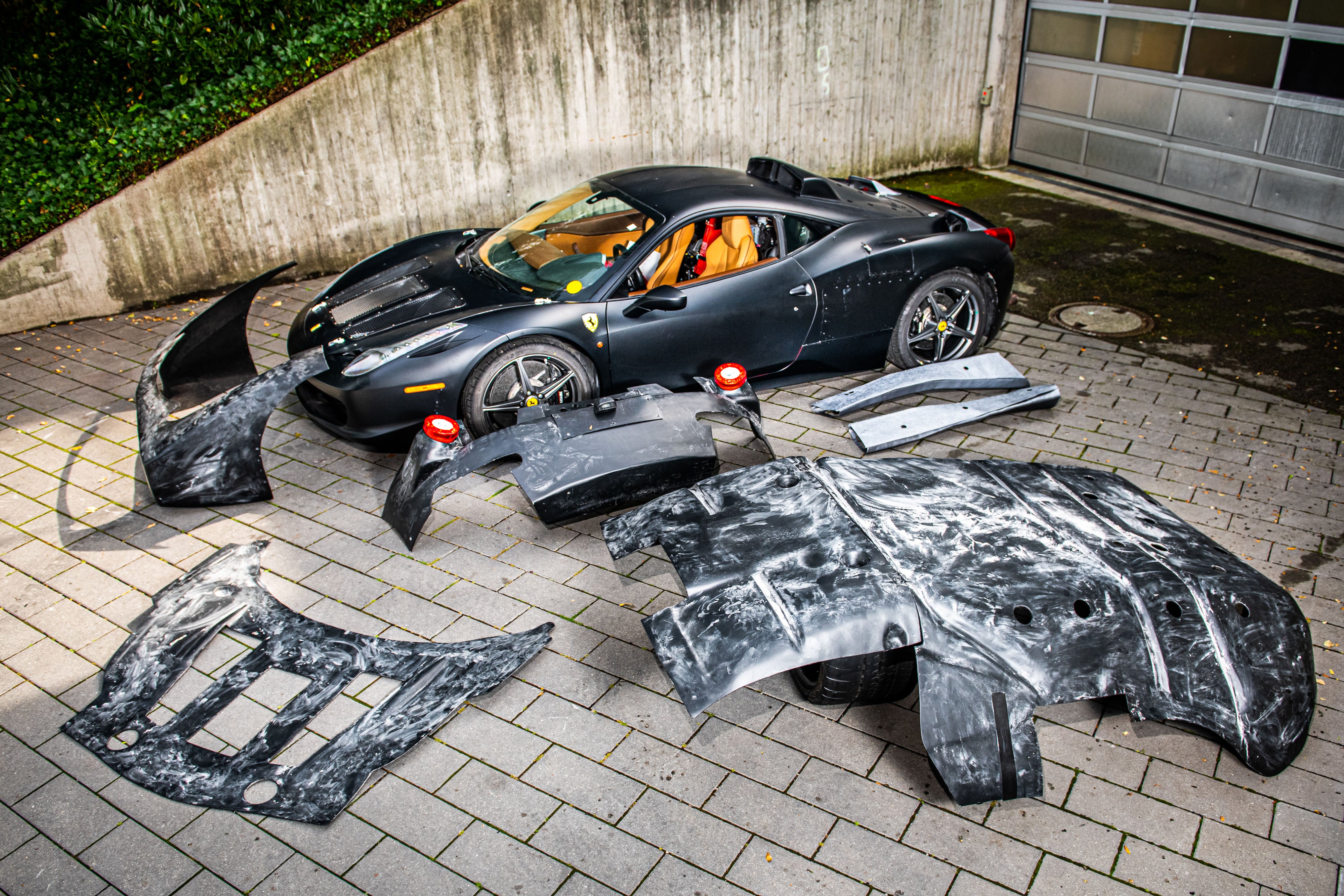 Built around a Ferrari 458 Italia on the Type F142 platform, the M6 car shares many body lines with the mainstream Ferrari, albeit with plenty of evidence of its service as a development mule. Panels have been roughly chopped up and fitted with vents and access hatches with little regard for aesthetics or finesse. The initial prototype saw most use during 2011 and 2012, with engineers testing mechanical components including the braking and suspension systems, the ESP programming, and doing intensive work on the hybrid system.

Many of the mods look like they could have been executed with parts from an Italian Home Depot, with crude latches and hinges bolted on as needed. As a bonus, the vehicle comes complete with additional camouflage bodywork, consisting of a front clip, hood cover, rear bumper, and a large piece that mounts over the roof and engine bay. 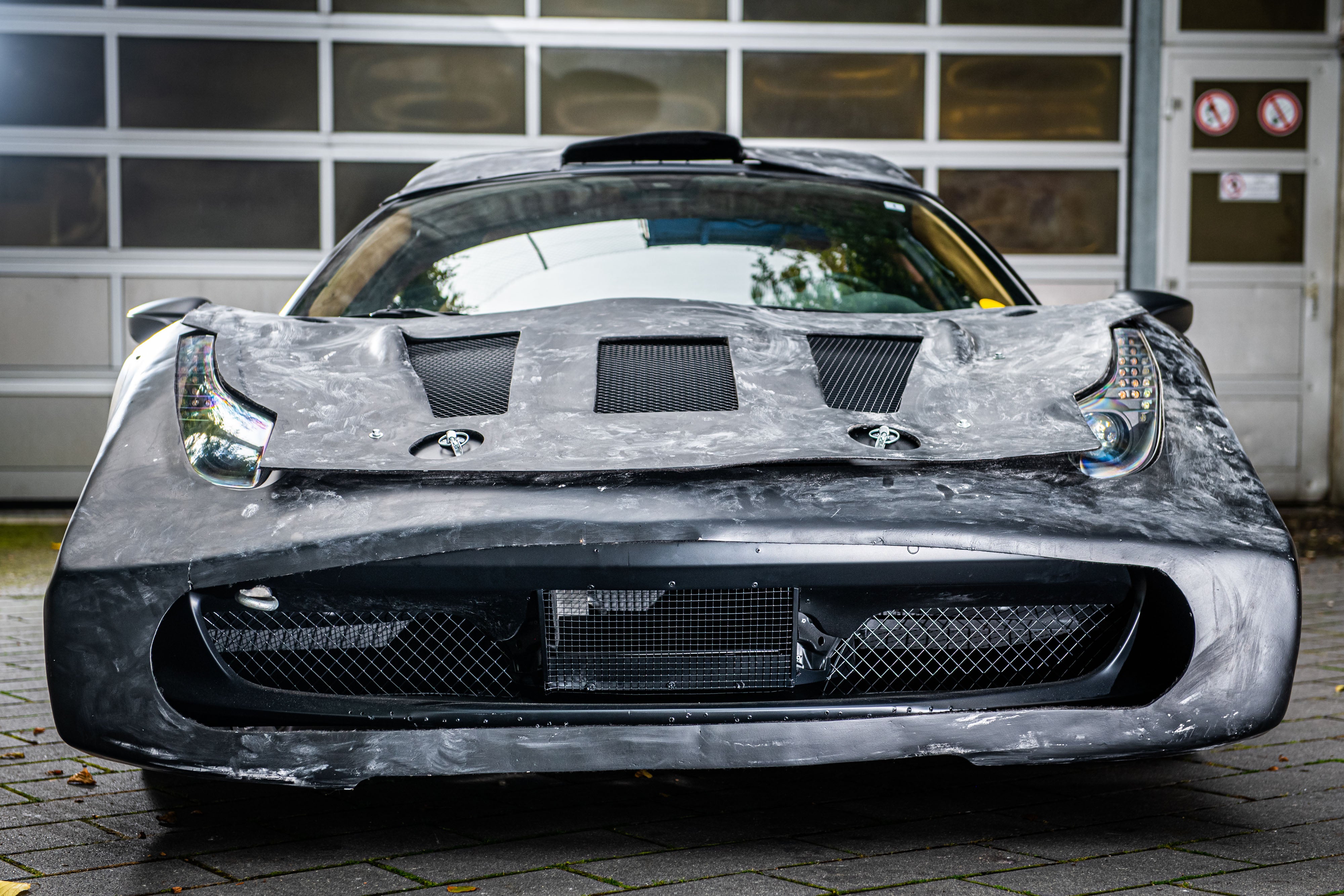 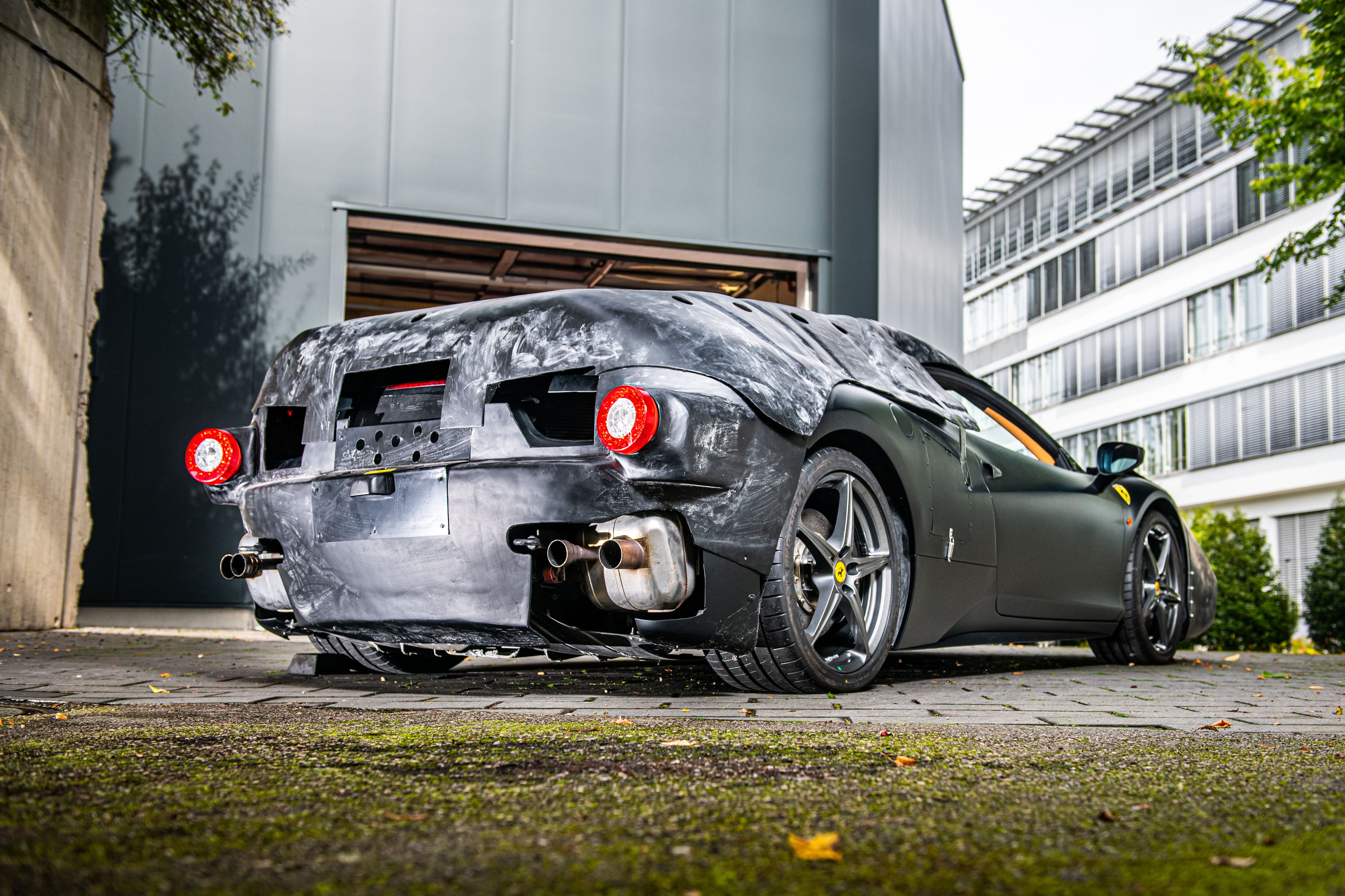 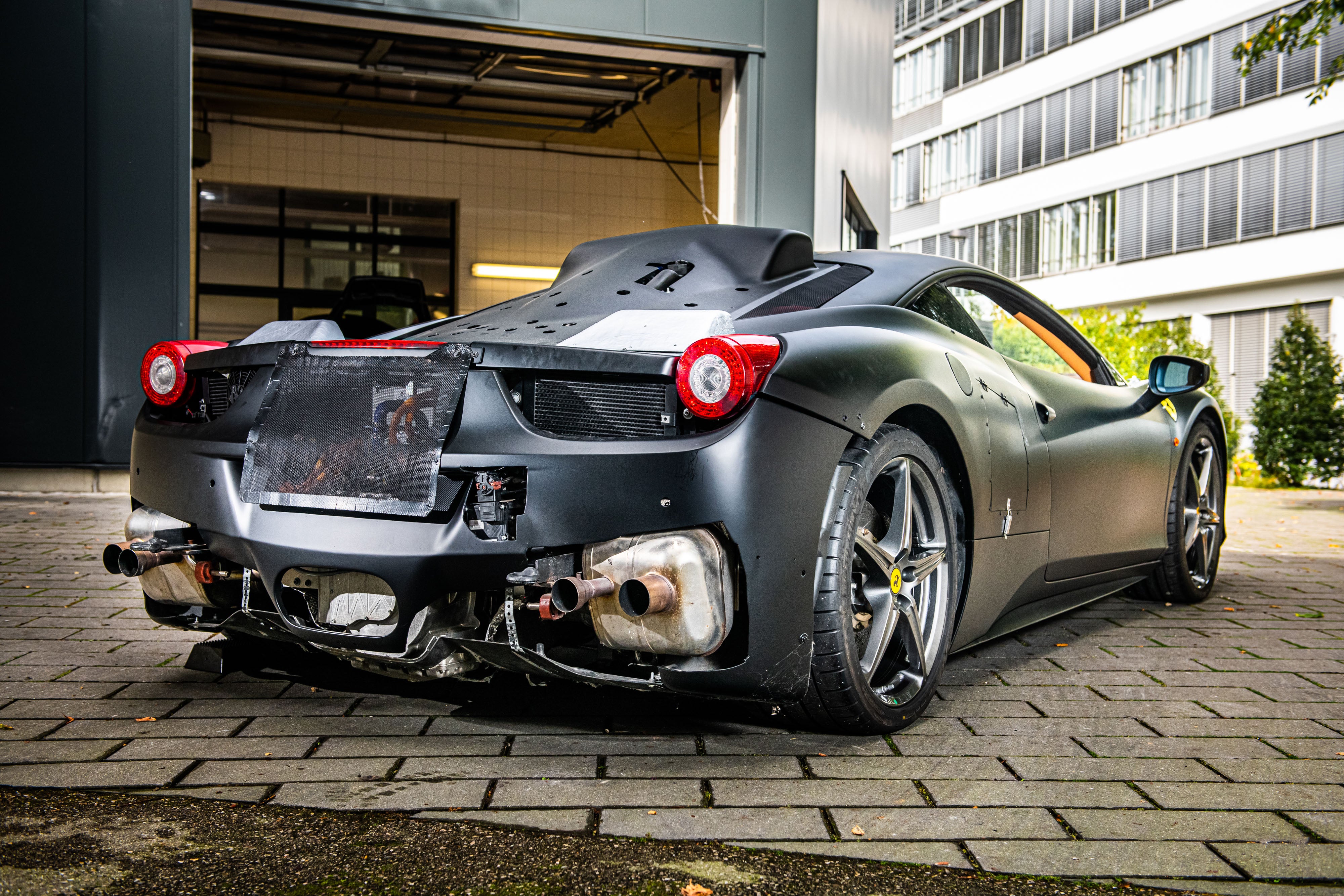 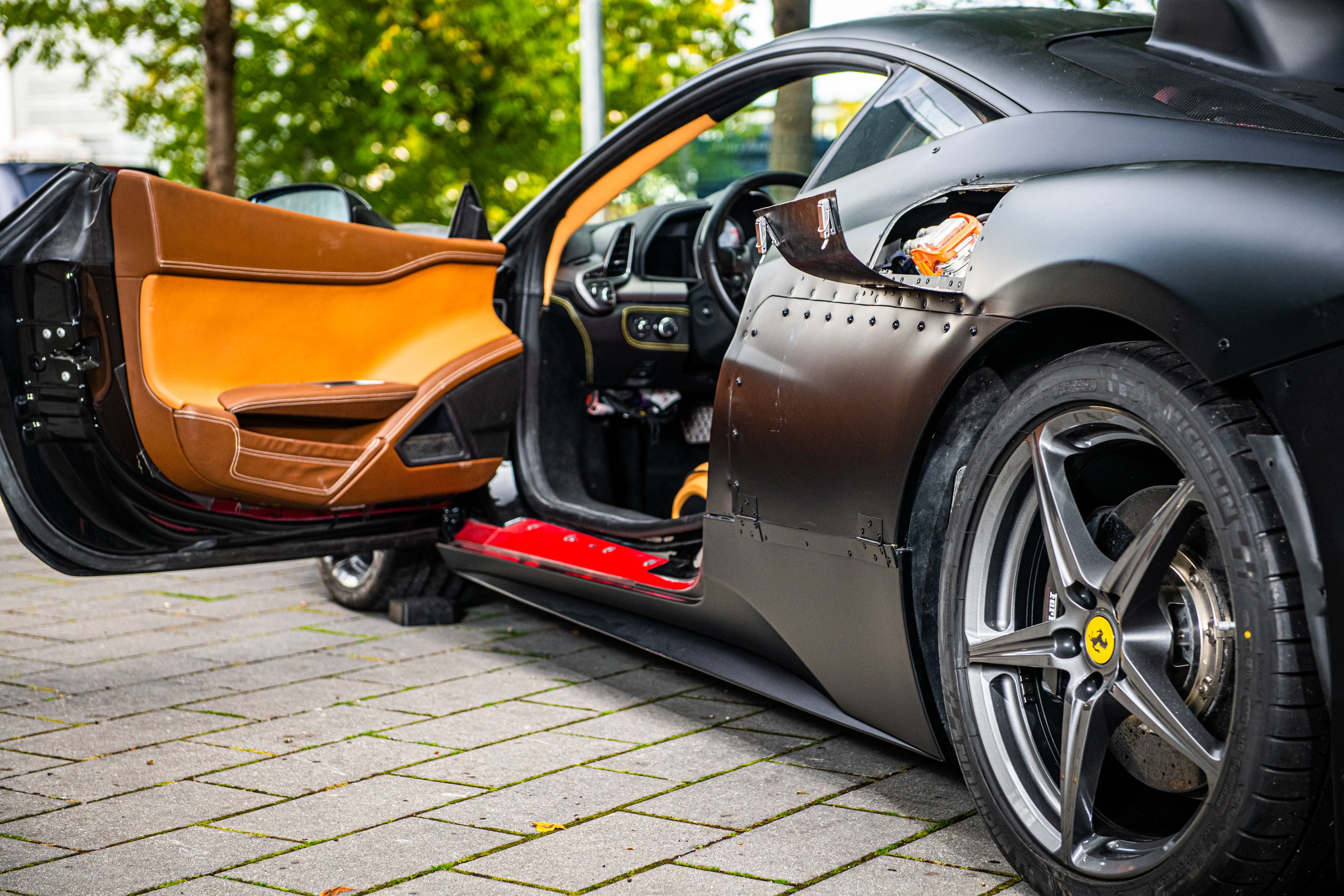 It’s the same story in the interior, with labels stuck on by Ferrari’s test engineers still present inside. German labels instruct the passengers not to move the seat due to a fire extinguisher installed behind, while a steering wheel note in English warns the driver “no full load!” due to the “cat” mounted on the car, presumably referring to a catalytic converter. The mule’s designation of “F150 M6” can be seen scrawled on the firewall.

The engine bay, featuring a V-12 engine designated F140 FB, is full of pipes and tubes and wires going every which way, as well as a label clearly stating the test vehicle is “NOT STREET LEGAL.” The production LaFerrari would later receive the F140 FE V12 developed from this earlier engine, which including the hybrid system had a total output of 950 hp. The engine cover includes a gigantic roof scoop to help channel in cool air, adding to the test vehicle’s purposeful, rough-and-ready aesthetic. 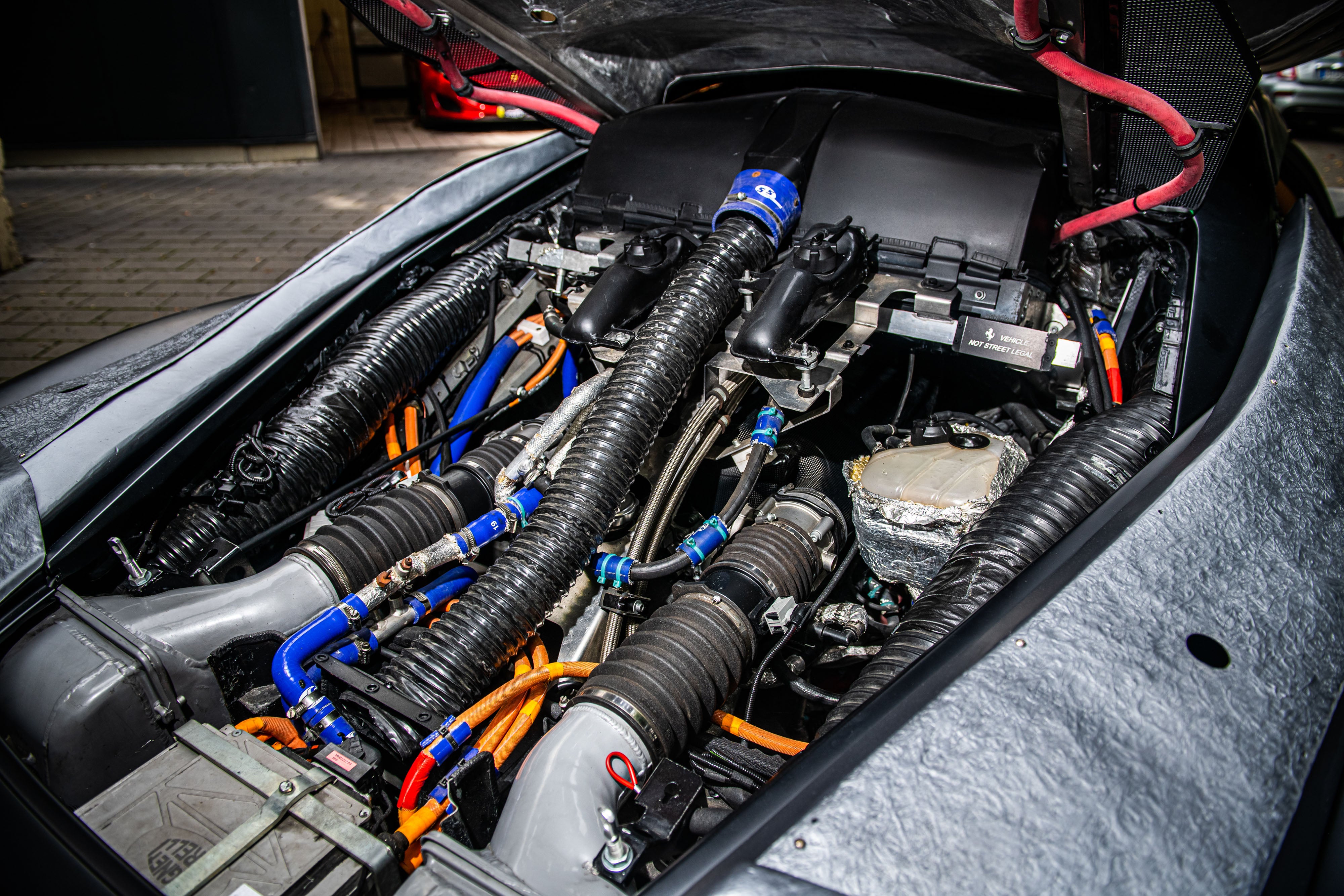 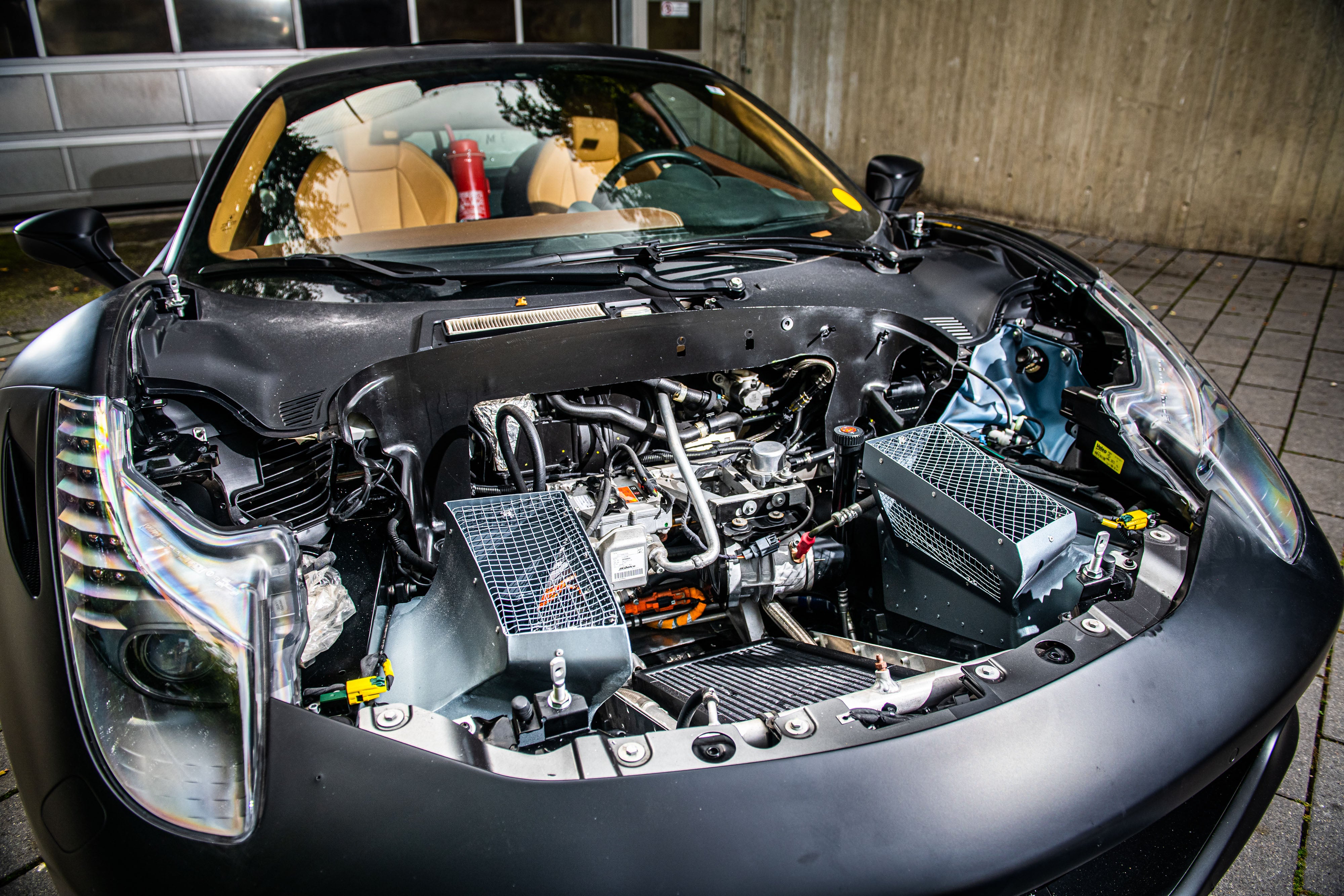 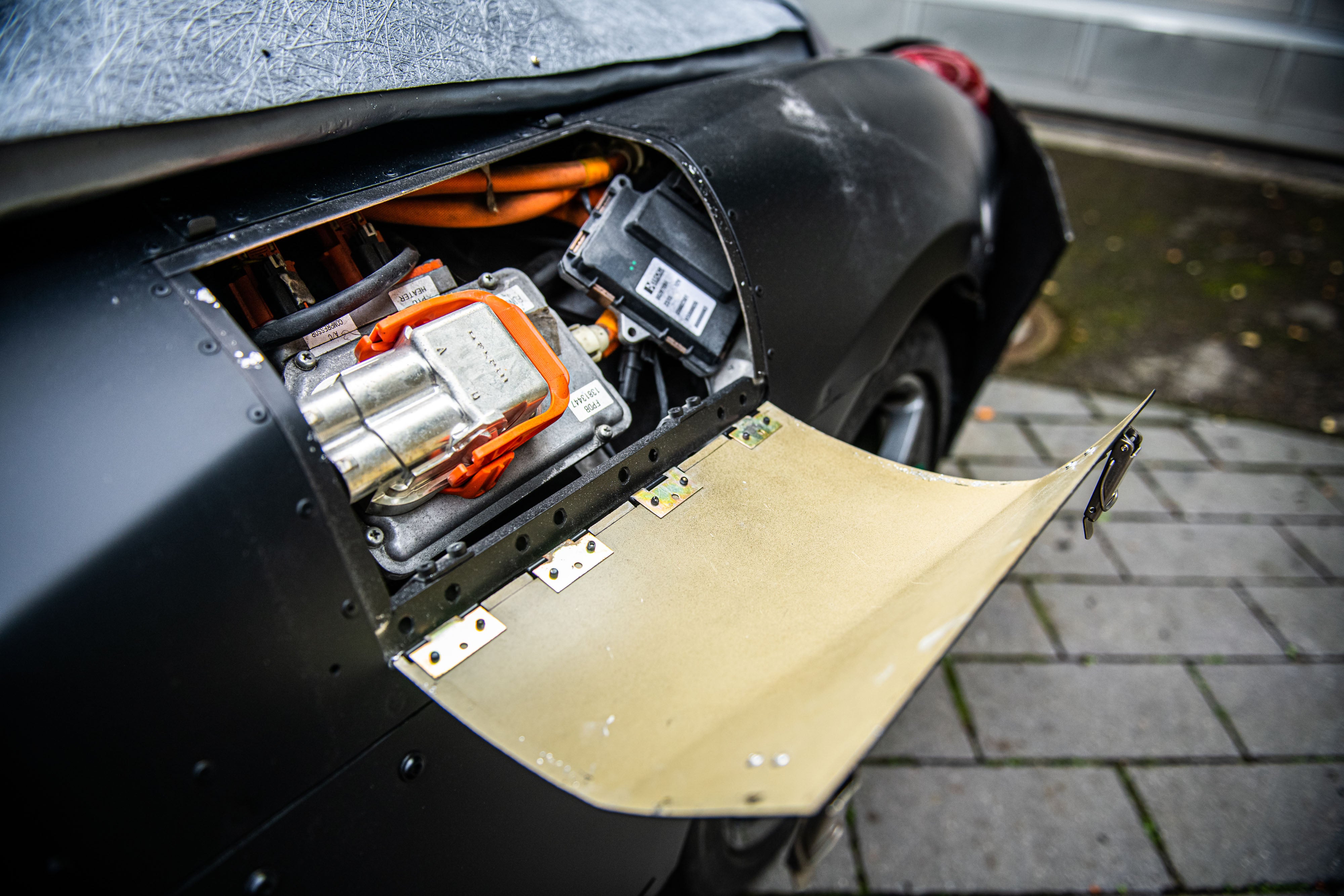 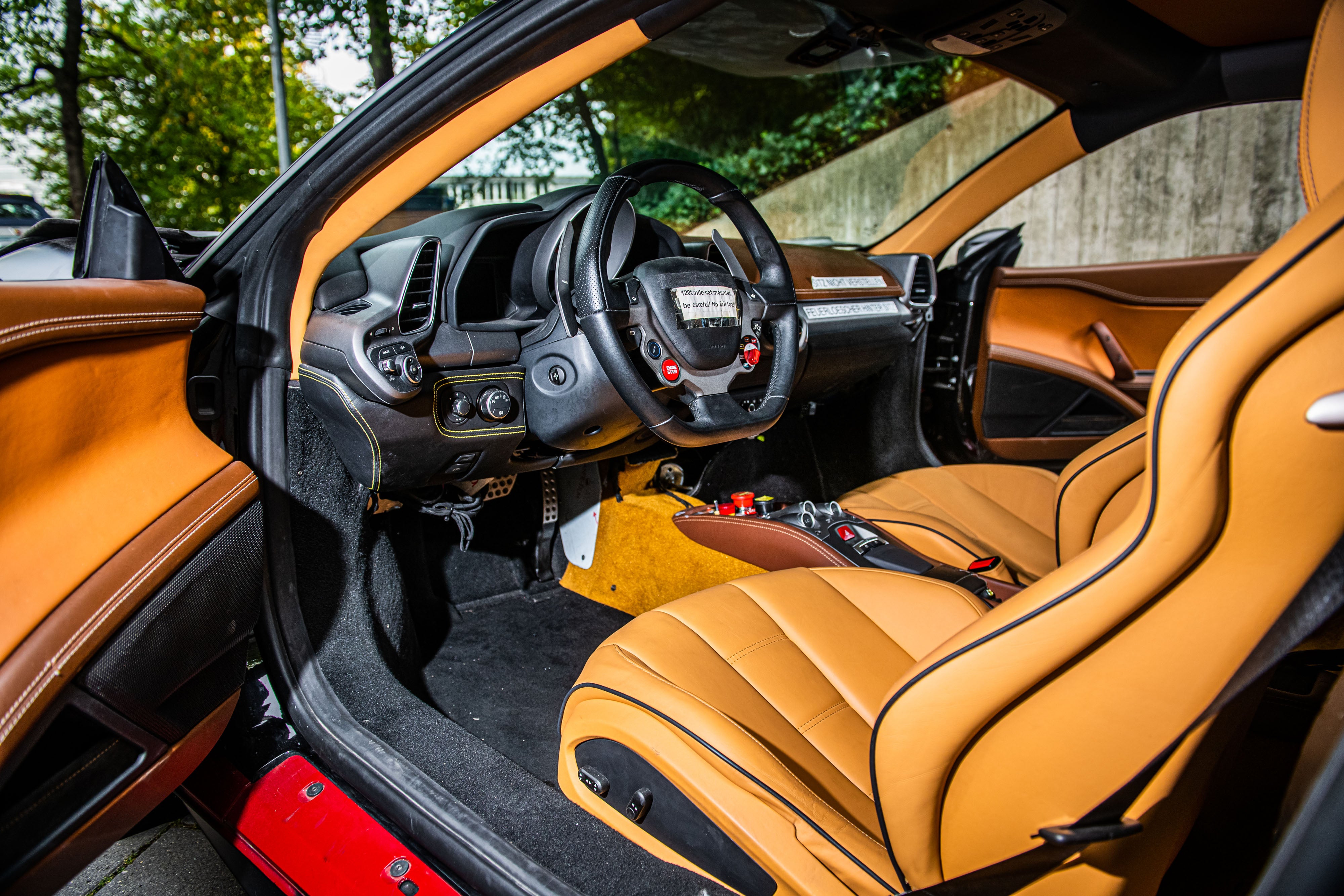 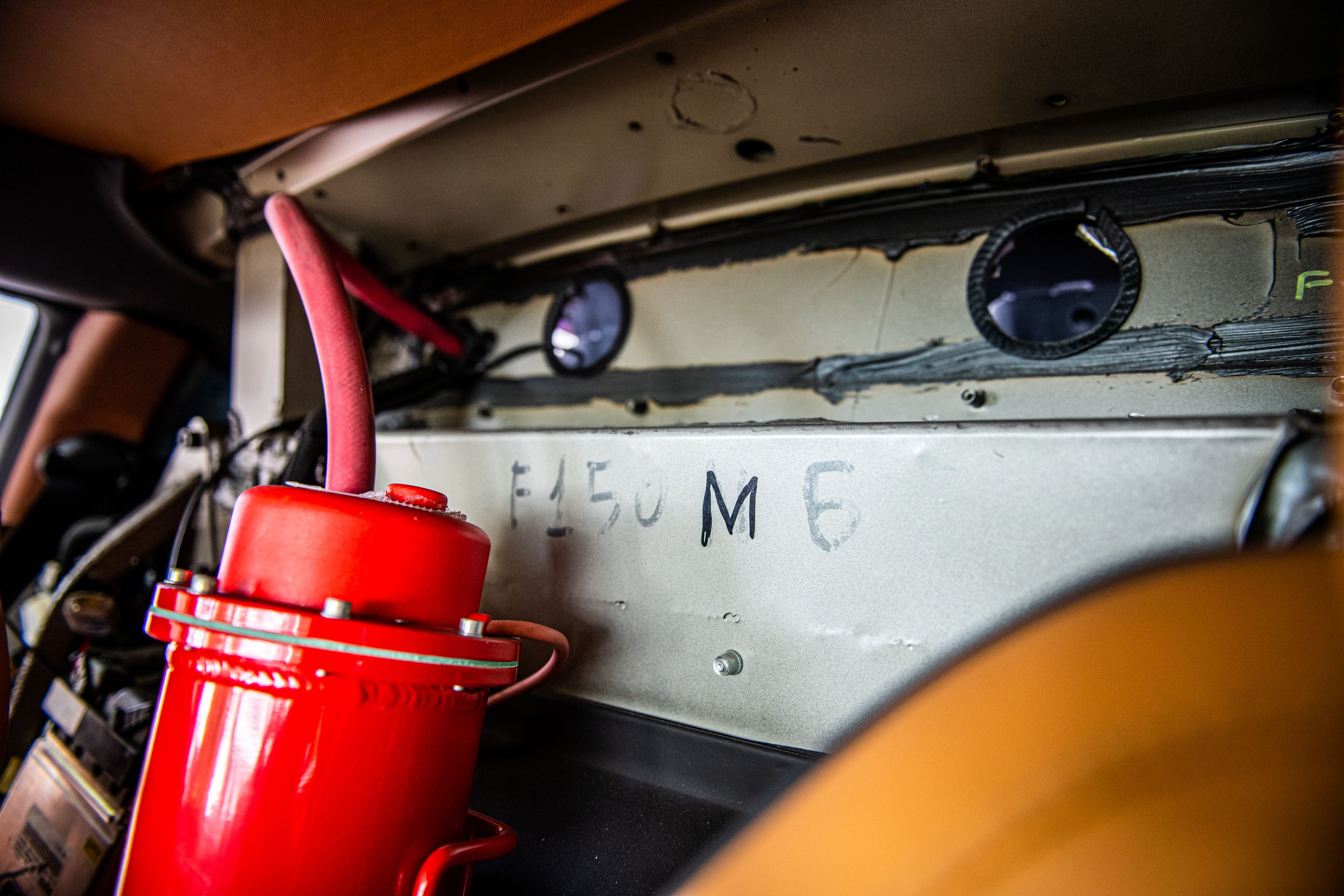 It’s unclear if the vehicle as presented for auction has functional hybrid hardware on board. The Drive has reached out to RM Sotheby’s for comment and will update accordingly.

The vehicle was first privately sold by Ferrari in July 2016 once it was no longer needed for testing duties. It was handed to its new owner after a repaint and refresh, and it was made clear that as an unhomologated vehicle, it could not be “registered for road use nor be used on public race circuits” according to RM Sotheby’s. However, the vehicle was sold with a running powertrain and could be used on private land. The vehicle as presented for auction bears 3,322 km on its odometer, or 2064 miles.

The vehicle is certified by Ferrari Classiche, and comes complete with a Yellow Book verifying its authenticity. Those eager to bid should register for RM Sotheby’s upcoming Monaco auction, to take place on 14 May 2022. For a one-of-one Ferrari development car, it’s very much the case that if you have to ask for a price, you probably can’t afford it. Regardless, expect it to go at a premium due to its unique history and status. Happy bidding!