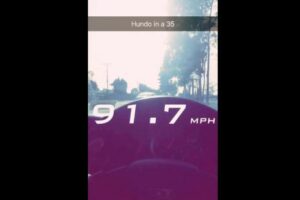 The speed filter has been embroiled in multiple lawsuits, with some arguing it encouraged dangerous driving.

Snapchat is said to have begun removing its ‘speed filter’ entirely. The decision to remove the filter is said to come amidst the wake of multiple lawsuits, arguing that it encouraged dangerous driving.

The speed filter was introduced back in 2013 and would overlay a speed reading either in km/h or mph, over the user’s video or photo. The feature was said to determine the speed of the user via GPS.

After facing a backlash, the company limited the speed readings to 35 mph, with an additional “don’t snap and drive” message. However, post an unfortunate incident involving the death of three young men in the USA in 2017, the appeals court ruled that the company can be sued over the speed filter’s role in the incident. This resulted in Snapchat removing the feature entirely from its app.

The parents of two of the victims from the crash sued Snapchat for the speed filter, stating that it encouraged dangerous driving. The lawsuit claimed that the two young men were driving at speeds in excess of 123 mph and using the Snapchat filter at the same time to record their high speed run.

Reports also stated multiple other incidents, wherein users of the social media app have been involved in fatal crashes and other related incidents while using the speed filter.