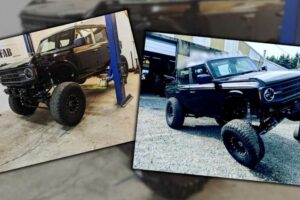 The live axle simply refuses to die. Rugged, hefty, and simple, they’ve been a mainstay of serious off-road rigs for decades. Even as more modern platforms switch to independent front suspension, traditionalists know what they like. To that end, one diehard builder in the Pacific Northwest is doing the work to modify Ford’s new Bronco with a front-end suspension setup that works the old-fashioned way.

The build starts by throwing out the original independent front suspension (IFS) of the new Bronco entirely. An live axle donated from a Ford Super Duty truck has been specified instead. To mount the axle, builder Kyle, @delfab__ on Instagram, has fabricated a radius arm setup under the front end of the vehicle. While they’re considered inferior in some respects to a more complicated four-link design, Kyle made the call due to the limited room available underneath the truck.

The original rear axle has been discarded as well. Like the front axle, it’s sourced from a Ford Super Duty, though Kyle has not been specific as to which precise parts are being used in particular. We’ve reached out for clarification and will update appropriately. There’s also hydraulic steering up front, a typical modification on live axle off-roaders with huge tires and big suspension lifts. The truck is set to score 40″ Mickey Thompson Baja Pro XS tires for a suitably chunky off-road look. 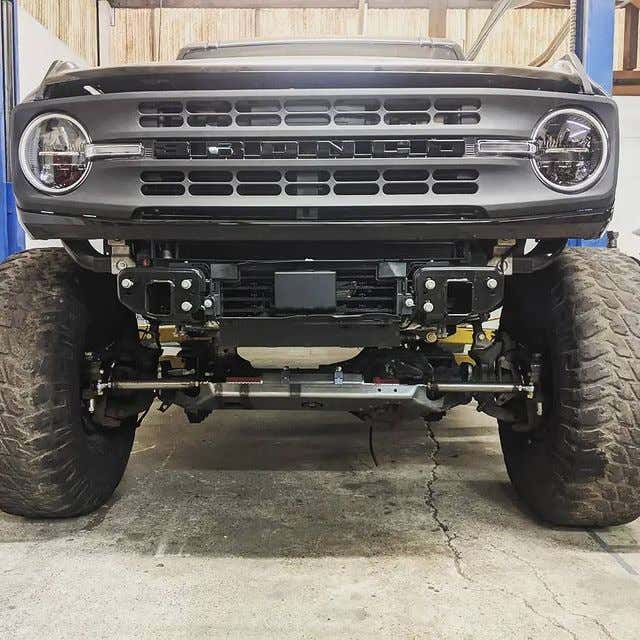 Hydraulic steering being fabricated for the live-axle build. The steering ram is protected to avoid damage from rock strikes.

Kitted out with 2.5″ Fox coilovers, there’s a full 9.5 inches of suspension travel now available to the mean-looking rig. Propped up on a forklift, Kyle provides a look at the difference in articulation between the new setup and a Bronco fitted with its original stock suspension. The contrast is night and day. Improved articulation is perhaps the biggest benefit of switching to a live axle setup. This can be a huge benefit in difficult rock-crawling situations, where the added flex allows the vehicle to better keep its wheels on the ground for improved traction.

The difference is obvious, though we’d love to see a tape measure to quantify the gains, too.

However, live axle designs do come with their drawbacks. Steering components can be more exposed and more easily damaged, and on-road manners are usually comparatively poor to a IFS setup. For high-speed work on dirt roads and sand, an IFS setup is often more desirable, too, allowing the driver better control in these conditions.

As with any engineering decision, there are generally trade-offs in both directions. Kyle has stated he’s received some heat online, but is undeterred in his quest. His local stomping ground is full of deep ruts and difficult rocky sections, and it’s the kind of terrain on which he appreciates the benefits of a live-axle vehicle. He doesn’t knock the original IFS design, and actually owns a stock Bronco in addition to the one he’s modifying. However, he’s also enjoying the live axle build and sees value in both approaches.

With the live axle setup, the resulting stance of the truck is imposing to say the least. The project is a SEMA build, so it should make a mean impression on the floor in Las Vegas this November. While Ford is still struggling with Bronco production, we fully expect to see a host of modified examples at the show. They’ll have to bring a strong game to steal the limelight from this one.