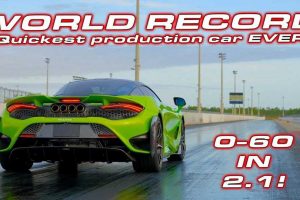 Just about everyone knows McLarens are the automotive equivalent of a cheetah on a drag strip, and the 765 Long Tail manages to one-up the already incredibly quick 720S. Brooks Weisblat from DragTimes is no stranger to high-performance vehicles with or without combustion engines, having tested just about all the speed demons. Porsche Taycan Turbo S, Ferrari F8 Tributo, Tesla Model S, Bugatti Chiron – you name it and he probably raced it at the drag strip.

He then swapped out the OEM rubber for a track-only set of Toyo R888R rubber to further improve the already impressive performance achieved with the original tires. His quickest run was a neck-twisting quarter-mile in 9.33 seconds at 150.87 mph (242.8 km/h). It wasn’t a one-time thing as Brooks was able to do three separate runs in the low nines, showing the 765LT is consistently one of the quickest-accelerating cars ever.

To put those numbers into perspective, the purpose-built Demon does 9.65 seconds at 140 mph (225 km/h) according to Dodge when using the Nitto drag slicks. Some owners have managed to drop below the 9.6-second mark, but still nowhere as quick as the 765LT, even when the Mac is using street tires.

While the saying “records are meant to be broken” is a cliché, we can already think of a few cars that may try to steal the 765LT’s thunder. The Aspark Owl with racing slicks covered the quarter-mile in a mind-boggling 1.6 seconds, while the Rimac C_Two promises to complete the task in 1.85 seconds on street rubber.

Let’s not forget the tri-motor Tesla Model S Plaid is coming this year with a 0-60 in under 2 seconds. The Pininfarina Battista and Lotus Evija electric hypercars also have the ingredients to smash records at the drag strip.