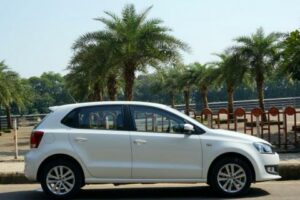 By the time I got my hands on her, she was already in a pretty bad condition. So, I got her properly checked up to see what all things needed attention.

BHPian SSK3210 recently shared this with other enthusiasts.

Hello everybody, this is the story of my car and how she came to me. Hope you enjoy it.

KA 22 P 3210, the Volkswagen Polo was bought by my grandmother’s brother in the year 2011 as an anniversary gift. As he bought it he drove it for a few days and found it to be a bit cumbersome to drive around the place he lived which is in the inner city. The roads are small and crowded there so he found himself driving his Alto more often. After a while, he pretty much stopped using the Polo and it just sat there in the sun for quite some time. By then, they planned a trip abroad and decided to leave the cars at our home while they are gone. Once they returned, they decided to take the Alto and leave the Polo at my house since in the city people were spitting on it, scratching the paint and doing all sorts of horrible things to it. He felt it would be safer in our hands than in the city and thus it landed at our house.

By the time she came, she was already in a pretty bad condition. Both her logos were stolen, her antenna was stolen, the paint was sun faded and the outside plastics were completely faded. She had like 13000 km on the odometer. My father drove her alternatingly with our older Tata Indigo CS for the first five years (it came to our house back in I guess 2013 or 2014) and he loved it so much that when he decided to go for a new car in 2015 he bought a Polo. Since I was a kid of age 12 back then I just didn’t know how to drive, but then I finished school and joined college and I needed a ride, as we had her we decided to let me use her.

As she came into my hands a (car-crazy dude) the first thing I did was do a proper check of things wrong with her and it goes as follows:

I started to tackle these problems quickly to get her into good shape again.

After doing all these there is a night and day difference between how she came to me and how she stands now she is currently parked in front of my house in her full glory under a shed and I use her as my daily driver. Here’s what BHPian Thad E Ginathom had to say about the matter:

It is great to see how you have brought this car to a like-new condition: truly a re-birth! Wishing you many happy km and years together.

VW aftersales is a mixed bunch. I am happy to say that I have been lucky, with no complaints at all. Even so, now that my 2014 GT TDI has reached a point in its life when a fair amount of money needs to be spent, and the warranty is long since over, I am going independent. But I am also lucky to have a high-quality, known independent not far away from my home.