Subaru BRZ STI: Could It Finally Be Happening? (UPDATE) Easily the weakest point of the first-generation Subaru BRZ (Toyota 86) was its engine. Its 2.0-liter flat-four wasn’t just prone to early failure; it was also gutless, which many hoped Subaru would address with a higher-performing turbo model. They were let down when the BRZ tS was announced sans more power and partially disappointed again when the 2022 BRZ was revealed, with more displacement and a smidgen more power, but still not as much as many wanted. Perhaps third time can be the charm, though, as a camouflaged prototype of a next-gen BRZ has been filmed drifting at Fuji Speedway, under the watchful eye of an STI jacket-clad team.

Update: Dec. 22, 11:20 a.m. ET: A Subaru spokesperson told The Drive that despite being a left-hand drive model, the vehicle depicted is a test mule for the Japanese market, and is camouflaged in accordance with company policy. 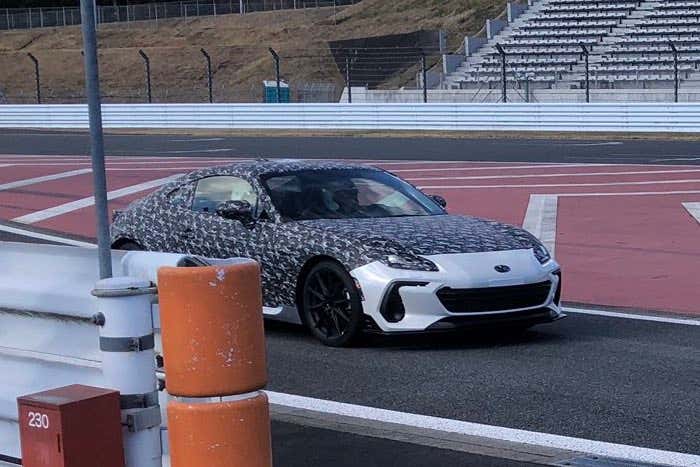 These images and video come courtesy of Twitter user @taku_saf1, who attended what was reportedly a filming day for Subaru’s new, BRZ-bodied Super GT car. While the presence of this race car could explain the attendance of what appear to be STI personnel, the camouflage on the 2022 BRZ prototype is hard not to find suspicious—the final design has already broken cover, so what’s there to hide? A closer examination reveals, this isn’t the BRZ we’ve already seen; its splitter and side skirts bear winglets not yet seen on any official photos of the new BRZ, and its rear diffuser also appears to have been enlarged.

While these could potentially be part of an optional aero package for the base BRZ, such cosmetics seem like something Subaru would’ve shown off upon the redesigned sports car’s reveal. Altogether more likely is that the car we see here is either the new tS or STI, either of which is likely to feature performance enhancements similar to the last-gen tS, notably Brembo brakes and Sachs shocks.

Whatever the case, the potential of the package can be seen in a video of the car cleanly drifting one of Fuji’s corners, its tires drowning out the sound of its exhaust note. While some may interpret the quiet exhaust as one muffled by a turbocharger, it’s not something to be read into too deeply, as the BRZ isn’t exceptionally loud from the factory.

As for whether a turbocharged BRZ is still on the table, rumors have suggested for years that such a car is at least possible, though many of them circulated before we knew Subaru would produce its 2.4-liter FA24 flat-four in a naturally aspirated configuration. Odds are, a turbo BRZ isn’t totally out of the question yet, but if this is the tS we’re looking at and not the STI, don’t expect a snail under the hood, much less the power you’ve been clamoring for since 2012. Not until Subaru’s plans for the 2022 BRZ—and any potential performance models—become clearer.

“The vehicle in the photo is 2022 BRZ for their domestic market. The exterior is almost the same as the U.S. spec,” explained Chuck Ballard, Subaru’s spokesperson for products and technology. “The car’s embargo lifted, but since it is a development vehicle, they are following the SBR protocol to camouflage.”

END_OF_DOCUMENT_TOKEN_TO_BE_REPLACED

END_OF_DOCUMENT_TOKEN_TO_BE_REPLACED
We and our partners use cookies on this site to improve our service, perform analytics, personalize advertising, measure advertising performance, and remember website preferences.Ok