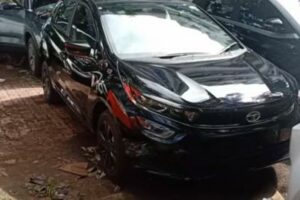 The Dark editions could be offered in the top-spec trim and priced at a premium of around Rs. 20,000, compared to their standard variants.

Dark editions of the Nexon and the Altroz were spotted at a dealer yard earlier this week. According to a media report, bookings for the same is said to have opened unofficially. The launch could take place on July 7, 2021. The Dark editions could be offered in the top-spec trim and priced at a premium of around Rs. 20,000, compared to their standard variants.

The dark editions of both cars get an all-black treatment. The radiator grille, alloy wheels, bumpers and fog lamp housings are all finished in black. The cars also get matte black model badges and chrome ‘Dark’ badges on the front fenders. On the inside, both cars get black upholstery as well as black dashboard trim.