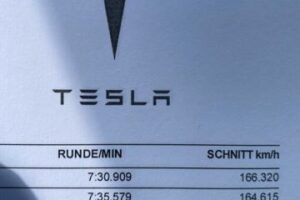 The lap time of the Tesla Model S Plaid is said to be almost 7 seconds faster than the previous record.

The Tesla Model S Plaid has claimed the lap record for a production electric car around the Nurburgring Nordschleife.

Elon Musk, the CEO of the American car brand, shared the lap timings of the Model S Plaid on social media. As seen from the image, the Model S Plaid has completed the 20.6 km course in 7:30.909 while it took 7:35.579 to complete the slightly longer 20.84 km course, which has been more commonly used since 2019.

The lap time of the Tesla Model S Plaid is said to be almost 7 seconds faster than the previous record of 7:42.3 – held by the Porsche Taycan Turbo S.

Musk also stated that the record-setting Model S Plaid was completely unmodified and direct from the factory. He also announced that a modified version of the Model S Plaid, featuring new aero surfaces, carbon brakes and track tyres will set a lap time at a slightly later stage as well.