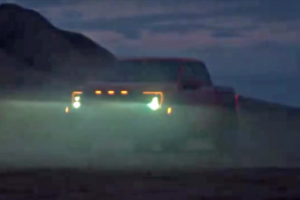 We’re less than a week out from the debut of the next-gen 2021 Ford F-150 Raptor, and the anticipation is killing us. Happily, Ford continues to chum the waters with this briefest of sneak-peeks, which Ford CEO Jim Farley posted to his Twitter account.

The short preview video shows us what the lighting will look like. The 2021 F-150’s white inquisitive-eyebrow DRLs are redone in yellow, and the three clearance-style lights at the leading edge of the hood are bracketed by two more on the fender extensions. We like the new pattern—it’s reminiscent of both the new F-150 and the outgoing Raptor, but it’s also distinctive.

Of course, what we’re really eager to know is what’s going on behind the grille and between those fender arches. We anticipate that Ford will follow much of the same formula as the outgoing Raptor, with a wider track, taller ground clearance, and shocks and springs stout enough for the truck to survive a fall from a three-story building, all enhanced with every last bit of computerized goodness that the Ford Performance engineers can muster.

And what of the powertrain?  We’d love to see a V-8 powered Raptor; after all, the Ram 1500 TRX packs a supercharged V-8. Still, we think the twin-turbo 3.5-liter EcoBoost V-6 and ten-speed automatic transmission will likely get the job again.

Of course, the light of knowledge will soon blast away the darkness of ignorance. Ford will reveal the new F-150 Raptor on Wednesday, February 3, and you can bet your tailgate we’ll post all the information right away.