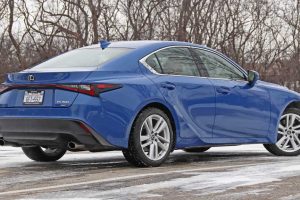 Is Lexus underreporting the IS300 AWD’s peak power? MotorTrend didn’t have the opportunity to run its IS300 AWD test car on the dyno, however, a Lexus representative informed us in an email that the “V-6 in the IS350 and IS300 AWD differ in various aspects of engine tuning in order to achieve the best possible performance for the respective IS RWD or AWD system. “

For argument’s sake, let’s presume MotorTrend’s IS300 AWD test car was an especially ripe example, which also benefited from testing conditions that were—for whatever reason—superior, given our colleagues ran the two cars four months apart. If this assumption holds true, then there’s still a reasonable argument for dropping an extra $1,900 or $3,900 on a rear- or all-wheel-drive IS350, right?

Well, if you find the IS350’s accompanying F Sport kit especially compelling, then you may want to spend the extra coin on the pricier model, but if you’re simply after straight-line speed, then you’re probably better off saving money and springing for an IS300 AWD. Why? Because a few hundred greenbacks ought to eke out IS350-like horsepower from the IS300 AWD’s V-6 engine.

Dennis Knatt, the owner of D3 Performance, told us over the phone that “it is possible” to unlock such a tune from the IS300 AWD’s engine. “I know that the [two models’ ECU] tables are basically the same,” Knatt added.

In fact, D3 Performance currently sells a $600 Performance Tuner for the rear-drive IS350 that boosts the engine’s output by a maximum of 24 horsepower. Knatt is confident his company can work the same magic it applies to the IS350’s V-6 engine to the unit that powers the IS300 AWD given enough time and access to an all-wheel-drive dyno.

“If I had my hands on [an IS300 AWD],” Knatt said, “I could get it done.” According to Knatt, D3 Performance needs around “three or four weeks” with an IS300 AWD to create a salable and verifiable tune for it; however, the company’s yet to find a volunteer willing to loan it an IS300 AWD—or access to the necessary dyno equipment—for such a period of time.

As MotorTrend’s test numbers reveal, the stock 2021 Lexus IS300 AWD is already a performance bargain compared to its IS350 kin. The fact spending a few hundred dollars on an ECU tune ought to unlock even more power from the IS300 AWD’s V-6 engine only makes it harder to justify spending thousands more on a 2021 Lexus IS350 under the pretense of its dynamic superiority alone.

If a modern-day sleeper sport sedan is what you’re after, then look no further than the 2021 Lexus IS300 AWD, which hides the heart of the powerful IS350 under the tamer bodywork of the more modest IS300.

READ MORE
New Lexus LF-Z Electrified Concept Previews the Brand’s Future
2022 Lexus IS500 First Look: It Has a V-8, But Don’t Call It an ISF
2021 Lexus LC500 Inspiration Series Comes With Junk on Its Trunk