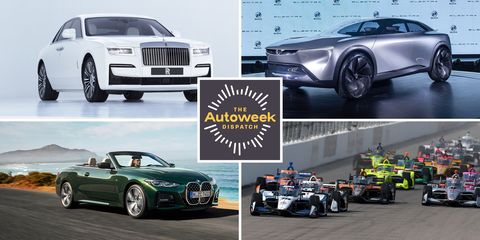 NASCAR and IndyCar both announced their 2021 schedules, and there are definitely some big changes afoot. We give you the lowdown on that and try to get a handle on what Rolls-Royce means when it talks about “post-opulence.” Here’s what else is happening in the car world:

Something has been bugging me about Rolls-Royce since we wrote a few stories about it a month ago, and it’s this whole notion of post-opulence. As it was launching its new Ghost Rolls used the phrase describing its evolved approach to the new sedan’s creation. And while the world is a very different place than it was in 2014 when Rolls started working on the car, the company says even before COVID-19 it saw customer behavior changing to a desire for simpler, less flashy things. As I heard and read about post-opulence (with visions of Rolls’ ginormous and crazy opulent Cullinan SUV dancing in my head) I kept wondering if it wasn’t just marketing gobbledygook. To find out, we sent European spy Mike Duff to go talk to Rolls and get to the bottom of it. He files the following report:

You don’t drop more than 300 large on a car without expecting people to notice. So when Rolls-Royce described the new Ghost sedan as being “post-opulent” many of us found it hard not to laugh. Is there a better demonstration of financial success than the ability to put a new Roller in the garage?

Yet a conversation with Richard Carter, Roll’s director of global communications, has revealed proper logic behind what seems like such an unlikely claim.

“More than almost any other automaker, we have to live in the future,” Carter told Autoweek at the U.K. launch of the Ghost. “That means we have to see trends before they develop. And when we started working on the Ghost we quickly realized that many potential buyers did want a car that was less ostentatious—that’s where the expression ‘post-opulent’ came from. Initially it was one we just used internally, but then we discovered it actually expresses a wider movement within the luxury goods market.”

With some of the longest model cycles in the industry—the previous Ghost lasted for a decade—Rolls-Royce can’t afford to be caught out by changing tastes. The Ghost’s pricing and positioning might suggest it should understudy the grander Phantom sedan, but Carter tells us it needs to serve a different role.

“Both cars are equally valid choices—we would never seek to impose values onto our buyers,” Carter said, “but we recognize that the Ghost’s appeal will be different, especially when it comes to those customers who could afford to choose either car.”

That’s why the new Ghost’s design has been turned down a couple of notches over its predecessor, with cleaner lines and an absence of flashy details. “Bling has its place,” Carter said, “but it should never be the only choice.”

While the expression “woke” might seem to have limited application to Rolls-Royce’s customer base, Carter was happy to use it to describe some of the brand’s younger buyers: “It is our role to meet their expectations, and meet their demands, just as we would any other customer.”

While it is easy to portray Rolls’ exclusive use of twin-turbocharged V12 powerplants as lacking in environmental virtue, the company is already planning for an electric future. It has been hinting at future EVs for longer than any other luxury maker, having shown the 102EX as long ago as 2011 and following it with the otherworldly 103EX Coupe five years later. Rolls has already confirmed it is working on a pure electric model that will use the same “Architecture of Luxury” platform as Phantom, Cullinan and Ghost—planning to skip hybridization altogether.

It certainly helps that Rolls’ existing V12 powertrain is incredibly quiet under gentle operation; the transition to fully silent electric motors is going to be much easier than it will be for almost any other brand. Don’t forget, this is a car company that has never fitted one of its cars with something as vulgar as a rev counter.

Buick’s Electra EV concept was among the highlights from this week’s Beijing Motor Show. Buick is huge in China, thanks largely to emperors driving them for decades, while the Electra is another car showcasing GM’s Ultium EV drivetrain, also headed into Hummers and Cadillacs (and most likely Chevys) in the near future. At the show in China Buick said the aim is a 410-mile range, while the 583-hp output means the car can sprint from 0-62 mph in just 4.3 seconds. We have no idea what’s to become of the Electra, and Buick is staying mum, but we doubt the Ultium drivetrain is just for Cadillac and Hummer, so watch this space.

Following the M3 sedan and the M4 coupe reveal, BMW is showing off the latest-generation 4-Series convertible. Hard to believe but this is only the second-gen 4-Series ragtop since it was spun off the 3-Series lineup in 2013. For 2021, BMW—ahem—aggressively restyled the 4-Series (check out that schnoz), added some oomph and expanded its technical powers with extra tech. The powertrains are the same as the coupe’s. Base 430i-badged cars use the 2.0-liter turbo-four while the 440i has BMW’s lovely B58 straight-six. The convertible arrives next March.

The NASCAR Cup Series schedule looks radically different for 2021, when the stock car sanctioning body adds more road courses, drops a few ovals and adds a dirt race. Yes, I said dirt race. It’s the first time in more than 50 years Cup has run on dirt, and next year Bristol Motor Speedway—of all places—will be covered in clay for its March 28 event. By the way, The King is not real happy about it. Meanwhile, the Sept. 18 night race will run on traditional concrete. Cup is also doubling the road-course races next year. Check out more details here. Should make for an interesting season for sure.

IndyCar is also playing with its 2021 schedule with a new event on the streets of Nashville and a Texas Motor Speedway doubleheader in early May. Iowa Speedway, Richmond Raceway and Circuit of the Americas are no longer on the schedule. For the 10th straight season, IndyCar opens its 2021 campaign on the streets of St. Petersburg, Florida, this time on March 7. (Let’s give ’em credit for trying to start the season there this year before, well, you know what happened.)

Robin Warner has been spending time in a limited-edition Toyota Corolla. That’s not a typo: The bestselling car in the history of cars has a limited-run model called the Corolla Apex Edition. Toyota is only building 6,000 for the 2021 model year and only 120 of those have six-speed manuals. Compared to your garden variety Corolla the Apex has a bit more power, a slightly lower suspension and some body mods that Toyota thinks makes it looks sporty. Find out what Warner thinks of the Apex here.

Own a (large) piece of history: In a couple of weeks Bonhams Auctions is offering for sale a 1963 Lincoln Continental dubbed “Limo One,” the car John F. Kennedy and Jacqueline Kennedy used on the morning of Nov. 22, 1963. No, not that Lincoln. This is the car that drove the Kennedys and Texas Gov. John Connally to Carswell Air Force Base in Fort Worth. The car has pretty much been sitting in museums since the trip to the Air Force base and was restored by Lincoln specialist Baker Auto of Putnam, Connecticut. The car’s engine has been replaced and the exterior repainted. The red leather interior is original. Bonhams is figuring the car will bring more than $300,000.

In the latest Quick Spin Robin Warner puts AMG’s mighty 4.0-liter, twin-turbo GT R to the test, tackling how it looks, performs and feels, and bringing you along for the ride. Warner also hops into the studio to talk about all things AMG GT R with host Wesley Wren. Tune in here, on Spotify, Apple Podcasts, Stitcher or wherever podcasts are played.

“For us, it was a real balance of trying to kind of embrace the old and also look at some new things. A lot of change certainly, for sure, but we believe it’s a good balance for both.”

That’s it for this week. As always we’re on the case this weekend, monitoring and reporting on automakers’ and sanctioning bodies’ latest happenings . We’ll continually update the site of course—you’ll know what’s happening when we do. Check back often!

END_OF_DOCUMENT_TOKEN_TO_BE_REPLACED

END_OF_DOCUMENT_TOKEN_TO_BE_REPLACED
We and our partners use cookies on this site to improve our service, perform analytics, personalize advertising, measure advertising performance, and remember website preferences.Ok