Home » News & Features » The First Of Mazda's RWD, Inline-Six Cars Will Be Here As Soon Next Year 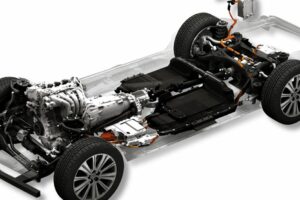 As other manufacturers continue to downsize and spend billions on electrification, Mazda is prepping an all-new inline-six. We’ve known about this project for a while, and we’ve also been aware of the Japanese manufacturer’s all-new, incoming longitudinal architecture set to be used with the fresh engine. And now, we know that the first cars to use both will be here very soon. Perhaps a little sooner than expected.

“We anticipate the arrival of new generation, large platform SUVs arriving in 2022,” says Mazda Australia managing director Vinesh Bhindi, as reported by Drive.com.au. The first of these is thought to be the CX-5, followed by its bigger brothers, the CX-9 and the JDM-focused CX-8.

It’ll be longer than the car it replaces (pictured above) and be fitted with a variety of inline-six petrol and diesel engines. The oil burners will have to use a turbocharger, but the petrol units? They’ll be naturally aspirated. All engines will get some extra assistance though, with a choice of either mild or full plug-in hybrid setups on the menu. Outputs of up to around 280bhp and 450lb ft of torque are rumoured.

The platform and engines won’t, you’ll be pleased to hear, be reserved for a bunch of SUVs. Also on the agenda is an all-new Mazda 6 saloon. A brand new, rear-drive four-door with an N/A straight-six in the 2020s? You’d better believe it.

On the performance side of things, it’s hard to know what to expect. Mazda told Motor Authority last year that it doesn’t have any plans for a return of the Mazdaspeed brand, although the company did recently trademark a new ‘R’ logo.

Meanwhile, nearly six years on from the RX-Vision concept‘s original reveal, rumours of a production version still float around from time to time. The new platform and engine could help this become a reality, but we’d caution against getting excited just yet.