Home » The Ford Evos Marks the Return of the SUS

The Ford Evos Marks the Return of the SUS 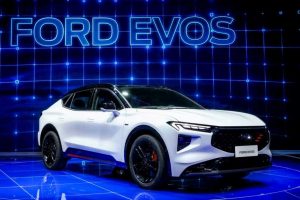 Cast your mind back to the 2011 Frankfurt Motor Show. There, Ford took the wraps off the gorgeous Evos Concept—a sedan with gullwing doors and styling well beyond Ford’s contemporary production cars. The whole point of the original Evos was to showcase—and evolve—Ford’s styling at the time. The new Evos is here to do something similar for Ford in China, and this time it isn’t just a concept.

The new Evos is actually a fully production-ready car headed for the Chinese market. It’s also the first Ford that was largely developed by Changan Ford, a joint venture between Chinese automaker Changan Automobile and the Blue Oval. The styling is fresh and thoroughly modern. An SUV with the proportions of a lifted hatchback, the Evos reminds us of the Acura ZDX (at least, in terms of ethos) with a bit of the attitude of the Subaru Outback SUS of yore. But putting old Acuras and Subarus to one side, the new Evos does help usher in a new era for Ford in China.

In order to complement the Evos’ thoroughly modern exterior looks, the inside is laden with tech—and huge screens. The upper half of the dashboard is covered by an enormous panel that nearly spans the full width of the interior and contains two displays. The first is a 12.3-inch digital instrument cluster and the second is a 27.0-inch 4K infotainment display that runs on Ford Sync+ 2.0.

Just like the Mustang Mach-E, the new Evos is underpinned by Ford’s new fully networked vehicle E/E architecture—which supports over-the-air updates—and will feature BlueCruise, Ford’s new SAE Level 2 driver-assist technology. Other neat features include a new “co-pilot” mode which allows the front passenger to take over their half of the huge display and relay pertinent information to the driver.

The new Evos will go on sale alongside a Chinese-market-specific Mach-E and a new PHEV version of the Escape. The Evos will be powered by a turbocharged 2.0-liter I-4 that a Ford spokesperson said is “like the Bronco Sport.” There is no word on specific outputs for the Evos, but the 2.0-liter in the Bronco Sport makes 245 hp and 275 lb-ft of torque, and it’s safe to assume the Evos’s numbers will be similar. There are no details on other optional powertrains that may be available in the future at this time.

Sadly, despite the sleek looks, stout powertrain, and SUV-like body style (three things American buyers adore), Ford has no plans to sell the Evos outside of China—at least for now.