The Genius Garage Is a Place Where Students Learn by Doing Casey Putsch didn’t like school. After getting his Industrial Design degree at Ohio State University, he felt underprepared for actually applying his education in the real world. And that’s despite participating in the Formula SAE program and working for the Center of Automotive Research. School, to Putsch, lacked two critical things: leadership and dirty hands.

“It goes back to college. It’s clear to me that the academic world is a vacuum. It’s possible to graduate with a four-year degree in engineering and never turn a wrench,” Putsch explains. “My Industrial Design program at Ohio State, respectfully, was complete garbage. There’s no mentorship or direction for the real world. I despise college and when I finally got out I had to fight to get anywhere at all.”

Equipped with a big personality and a lot of confidence, Putsch started a racing shop to restore, prep, and provide trackside assistance to his clients that own vintage race cars. That aligned well with his skill set and his passions, as the native Ohioan is also passionate about racing and IndyCar. 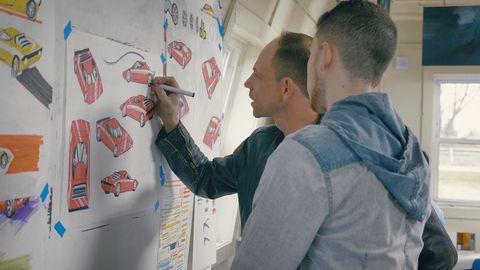 One day at his racing shop, an idea sparked.

“Eight years ago, sitting in my shop alone, looking at all these cars with an incredible history of sport and engineering from their time period that had stories to tell and lessons to teach. I had a facility to create. And I had the proverbial Rolodex of incredible people with a lifetime of wisdom to share,” Putsch said.

“It hit me when I was in the shop that day,” Putsch continues, “if I’m going to be involved with cars and airplanes and racing anyway, it’s selfish to do it just for myself. Why don’t I organize this in a way that makes the difference for these bright, young people. And right that wrong that existed when I was in school and I see still exists. That was the exact thought that created Genius Garage and the formula to do it.”

“I didn’t like the way the world worked,” Putsch concluded. “And I thought there was a giant missing link and gap between academia and industry that was screwing over young people. And I knew it first hand because it tried to screw me over and I wanted to do something about it.”

And, with that, the educational internship 501(c)(3), otherwise known as Genius Garage Racing Team, was born. A small group of students, typically around 6-12, enrolls in a term of varying length. Students are given designs, a set of tools, and general instruction, but are largely left to figure things out for themselves, and that is all on purpose.

“The purpose of Genius Garage is to help build them as people, frankly,” Putsch explains, “We build people. We build leaders. At some point through the program, whether it’s early or later on, each student clicks and they basically become the confident person they are going to be.“

“The project” is anything from rebuilding an old Indy car (the very first Genius Garage project was rebuilding a 1997 Hogan Racing Reynard), to a ground-up diesel-powered aero- and fuel-efficient prototype, to getting a 100-year-old bi-plane back in the air.

The program has proven quite successful. Putsch has seen many of his students accept offers to join race teams or take on important roles in the automotive world at all the major brands, including Tesla, Ford, GM, FCA, and Honda.

Nowadays hundreds of students apply from all over the world. Students submit a résumé and a cover letter that explains why they’re a good candidate for Genius Garage and why it would be meaningful in their life. A select few are then interviewed and it goes from there. The most common student major is mechanical engineering, but Genius Garage has accepted electrical engineers, aviation managers, business majors, and various others.

You might say, sure, this is great, but how do you pay for it? Putsch still runs his racing shop and funds a fair amount himself. Additionally, he donates space of the shop for projects to happen. From there, a few of his clients chip in, as do angel investors. It’s not enough for an opulent University Library, but it is enough for tools, projects, and hand cleaner. 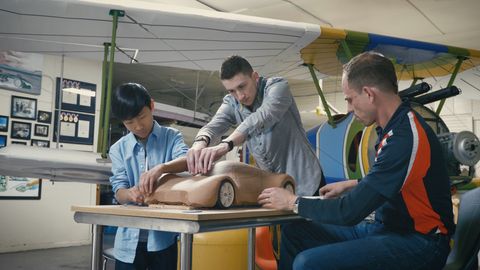 Ironically enough, struggles for funding early on is what lead to one of Putsch’s larger successes, his YouTube channel: Casey Putsch.

“I had a really hard time connecting with any sort of media. Nobody would pay attention. And I just didn’t get that. Because I knew what we were doing is huge and that the stories are amazing,” Putsch said.

That channel includes updates on his various projects, as well as a driving tips, and opinions of different automotive technologies. And just like Genius Garage, the channel is gaining momentum. The main reason for that is Putsch himself. He has big ideas, big opinions and likes to make sure everyone knows it. Furthermore, he has a novel approach to problems of the world, and it’s nice to watch his creativity play out.

“Genius Garage bridges the gap [between the academic and the real world] because students see their academics applied, this is where they actually to what they want to do and believe they can in a supportive environment.”

And I’ve experienced that gap myself. I, too, was a mechanical engineering student. I, too, noticed the wide gap between the principles discussed in class and the actual real problems that are solved in the working world. The real education you’re getting is that step between the theoretical and the actual—that’s where you use your brain.

And while it’s great to think that, Casey Putsch is actually doing something about it.

END_OF_DOCUMENT_TOKEN_TO_BE_REPLACED

END_OF_DOCUMENT_TOKEN_TO_BE_REPLACED
We and our partners use cookies on this site to improve our service, perform analytics, personalize advertising, measure advertising performance, and remember website preferences.Ok