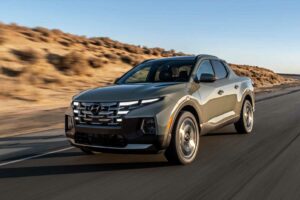 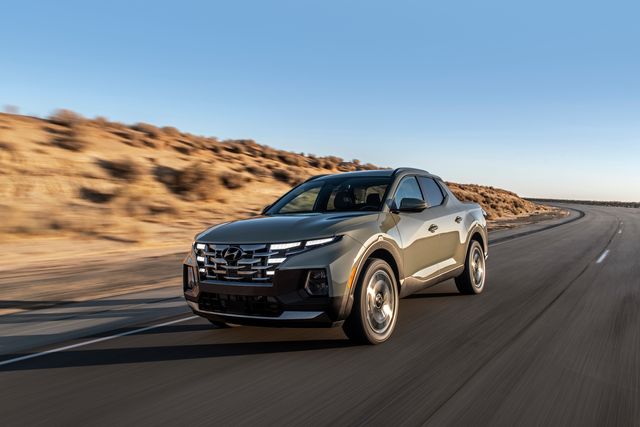 There’s a sudden spark surrounding the once dead compact pickup world: both Hyundai and Ford are set to launch little pickups in 2021. Hyundai’s offering, the Santa Cruz, debuted initially as a concept truck at the Detroit auto show in 2015. After a short stint in concept car limbo, Hyundai readied the compact pickup for production. While the Santa Cruz is just around the corner, more information about the upcoming pickup is finally coming to light. Namely, the pickup’s fuel economy figures.

Recently uploaded to the Environmental Protection Agency’s fuel economy website, the Santa Cruz pickup’s fuel figures are finally available to the public. As you’d expect from a pickup, the numbers aren’t great, but you can judge how it stands for yourself. The best-case scenario for Hyundai’s upcoming compact pickup is the all-wheel-drive variant. The 2.5-liter I4-powered pickup turns 21 mpg city and 27 mpg highway into a combined 23 mpg. The front-drive 2.5 version drops one mpg on the highway but sports the same combined fuel economy. The turbocharged 2.5-liter Santa Cruz features 19 mpg city and 27 mpg highway, with a combined number of 22 mpg.

While we don’t know the numbers coming out of Hyundai’s main competition, we do know how the rest of the truck world looks. Honda’s Ridgeline sports worse fuel economy numbers from its naturally aspirated 3.5-liter V6: 18 mpg city, 24 mpg highway and 21 mpg combined. This penalty isn’t huge, by any means, but it does point the Santa Cruz in the right direction.

That said, looking at the rest of the market, the Santa Cruz isn’t exactly a leap forward. The full-size, diesel-burning 2021 Chevrolet Silverado reports back similar figures to Hyundai’s compact truck. The Silverado with the 3.0-liter diesel gets you 22 mpg in the city, 26 mpg on the highway with a combined score of 24. Ford’s hybrid F-150 Power Boost does even better at 25 mpg combined. Obviously, both of these rigs are more expensive than the upcoming Santa Cruz; it shows how far technology has come with fuel-sipping trucks.

Going back in time to the Cruz’s forefathers, the compact pickups of yesteryear, we can see how things have changed for the better. The final generation of the compact Ford Ranger rolled rout of Ford’s factory in 2011 squeezed 22 mpg in the city out of its 2.3-liter I4, and 27 mpg on the highway. That’s a combined fuel economy of 24 mpg, which bests the Santa Cruz. Admittedly, the Santa Cruz is both heavier and more powerful than the fuel-sipping compact Ranger.

If you’re wondering how the Santa Cruz fares against its crossover stablemates? Well, not great. The 2022 Hyundai Tucson sports a similar powertrain, yet squeezes 29 combined mpg from its front-drive powertrain. The larger Santa Fe achieves 26 mpg combined from the same powertrain. Of course, both crossovers lack the most important part of the Santa Cruz: a truck bed.

Now, we don’t know how Ford’s Maverick will perform for the EPA, but the Santa Cruze won’t set any hypermiling records. What Hyundai’s compact pickup will do is give city slickers, suburbanites and everyone else a chance to own a new compact pickup.

Do you think that the Hyundai Santa Cruz should have better fuel economy? Let us know in the comments below.