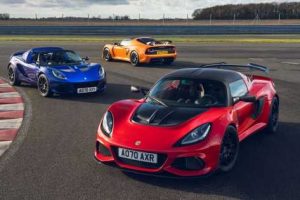 There’ll be five ‘Final Edition’ derivatives in total, kicking off with the £45,500 Elise Sport 240 (below), a replacement for the Sport 220. Its supercharged 1.8-litre Toyota inline-four has been given a tickle, bringing the power up by 23bhp to a healthy 240. The Elise is a featherweight as it is, but Lotus has trimmed the fat further with 10-spoke 16-inch front/17-inch rear forged wheels, optional carbon fibre panels, a lithium-ion battery and a polycarbonate rear window. Spec all the lighter bits, and the weight drops from 922kg to just 898kg.

If you’re after ultimate on-track performance, you’ll be wanting the £50,900 Elise Cup 250 Final Edition with its prominent aero pack. Consisting of a front splitter, rear wing, rear diffuser and side skirt extensions, the package provides 155kg of downforce at the car’s 154mph top speed. It too has snazzy forged wheels, although here, they’re wrapped in Yokohama A052 semi-slick tyres.

There are three Final Edition Exiges on offer, starting with the Sport 390 (below), a replacement for the 350. The Edelbrock supercharger force-feeding its 3.5-litre Toyota V6 has a new calibration, bumping the power by 47bhp to 397. It’s by far the cheapest Exige of the lot at £64,000, which is a damn near identical price to that of a Porsche 718 Cayman GTS 4.0.

The Exige Sport 420 Final Edition (below) serves as a replacement for the Sport 410 (keeping up with all these still?), with a 420bhp version of the Toyota V6 teamed up with three-way adjustable Nitron dampers. The Eibach anti-roll bars can also be tweaked, while the Michelin Pilot Sport 4S boots seen on the 390 make way for more focused Cup 2s here.

A more extreme, mostly carbon fibre aero package is good for 171kg of downforce. Impressively, the 430 generates the same amount at 100mph as the Sport 390 manages at 170. like the 420 it has the adjustable Nitron dampers and Eibach anti-roll bars combo, with Cup 2s wrapping its 10-spoke forged wheels. Other attributes include a titanium exhaust system, and a motorsport-style variable traction control system with six settings if you include the most exciting one – ‘off’.

All of these cars are on sale now. They’ll contribute to a combined total of around 55,000 Elise, Exige and Evora sales, which makes up more than half of the road cars Lotus has made since 1948, the company says.