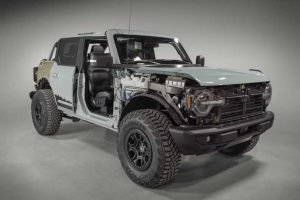 It’s typically not advisable to remove the body from your car, but for off-roaders, that’s just where the fun begins. An easy way to improve your truck’s capability over the open country is to start removing bits of the body—primarily the fenders and bumpers—until you have better wheel articulation and better angles of approach and departure.

Ford knows this, but it also wants to sell you some of the dozens of accessories it’s offering with the upcoming truck. It took most of the body off a few four-door Broncos just to show potential buyers just how customizable the truck is, and it looks like it will indeed be simple to add new parts to your Bronco. You might not want to bolt them on once you start removing stuff, however, as a “naked” Bronco looks pretty awesome, as it turns out. 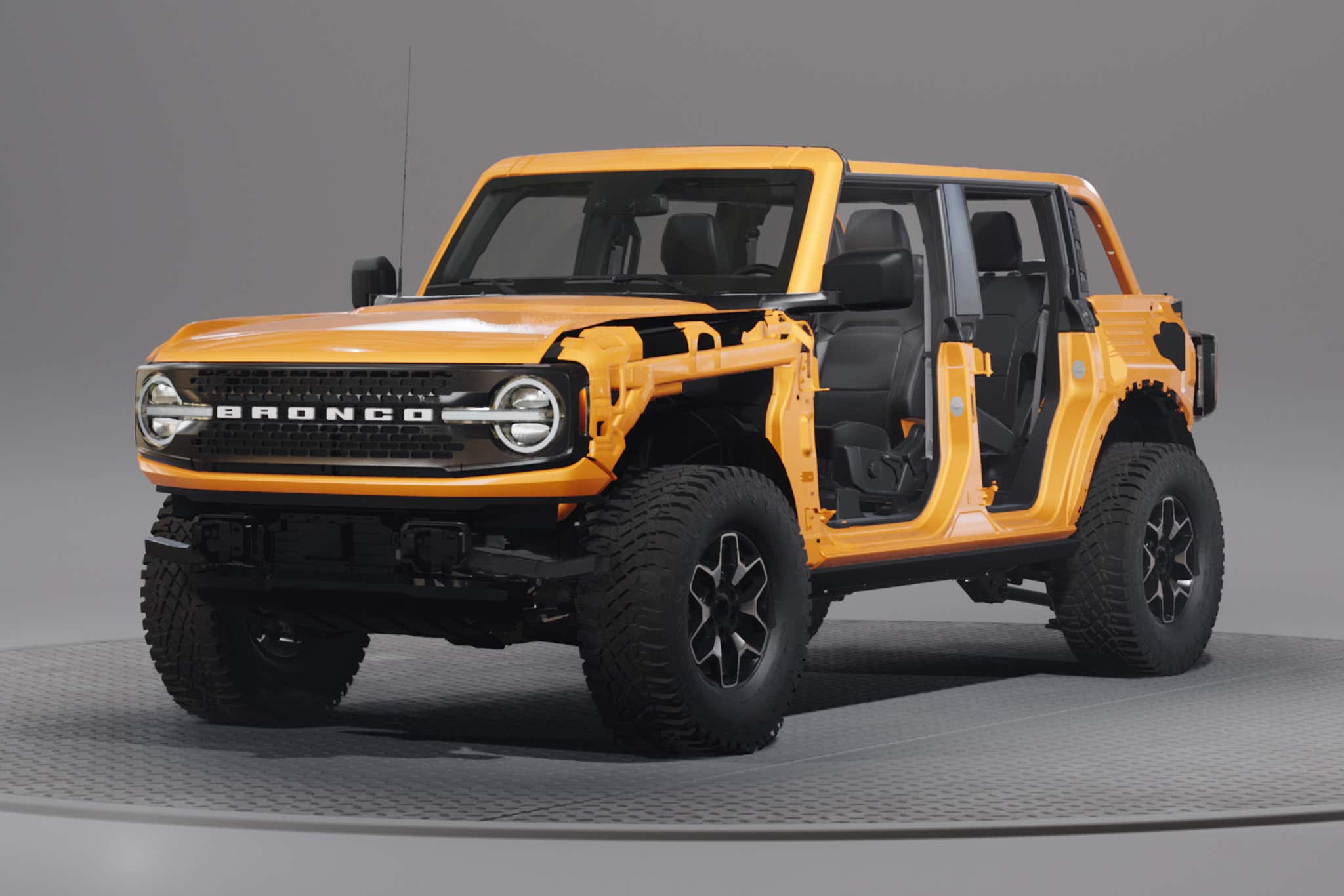 Above, the front fascia is still completely intact, but pretty much everything else besides the hood has been removed. You can see just how hard Ford is trying to bring the heat to Jeep by how good this thing looks with barely any of the body still attached. It’s also clear how easy it’s going to be for the Blue Oval to make special editions of the truck, as well as be modified by the public. All Ford has to do is come up with some new door skins, new fender shapes, and that’s a new special edition to market. Did somebody say Bronco Warthog?

Other images released by Ford show this whole disassembly process taking place, and it seems like everything can be removed with a simple socket set. You also get to see the true shape of the Bronco headlights behind the fascia, which look pretty weird. Unsurprisingly, there’s a good look at the high-tech weight-saving steel unibody that supports all of these panels as well. 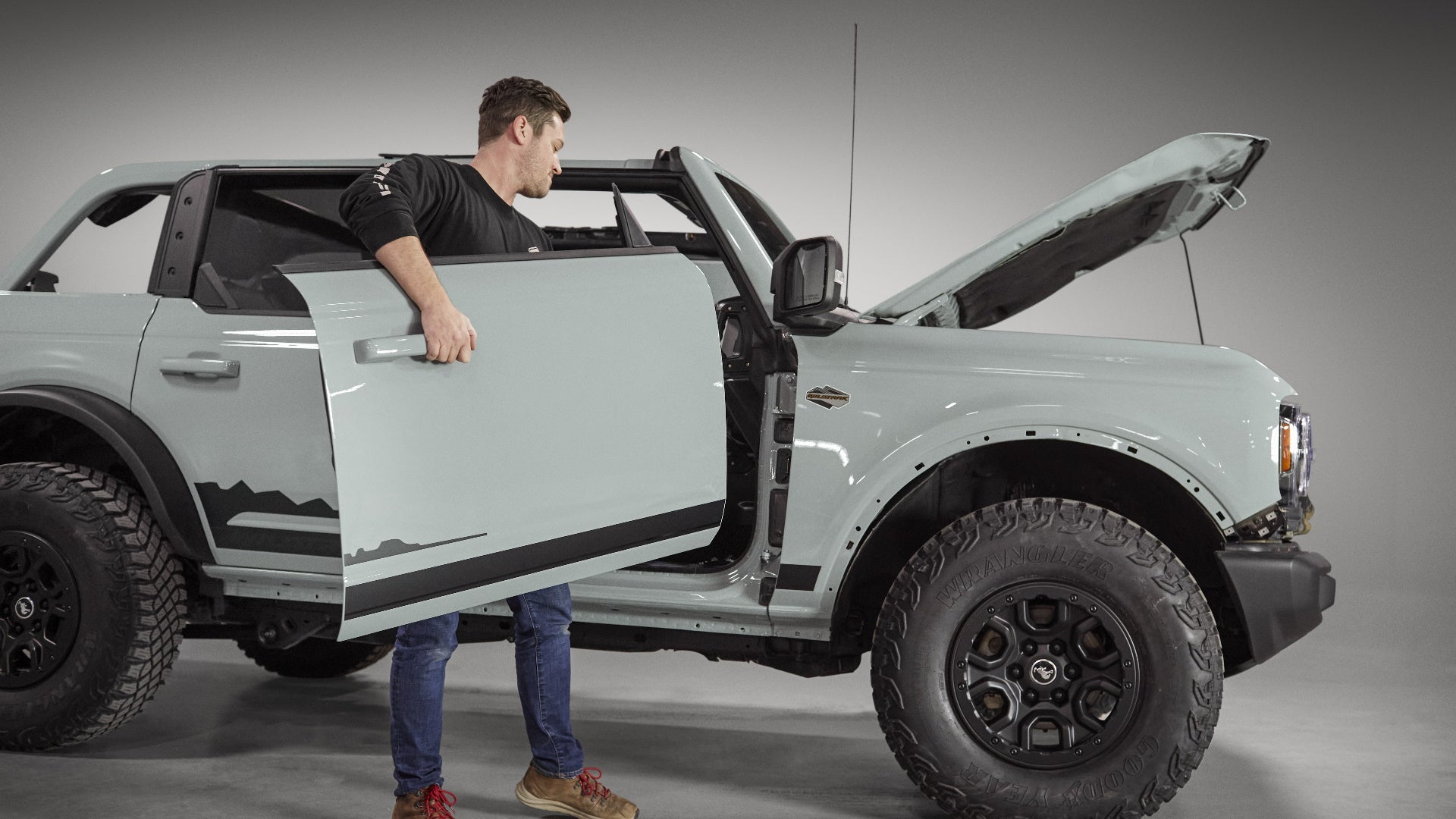 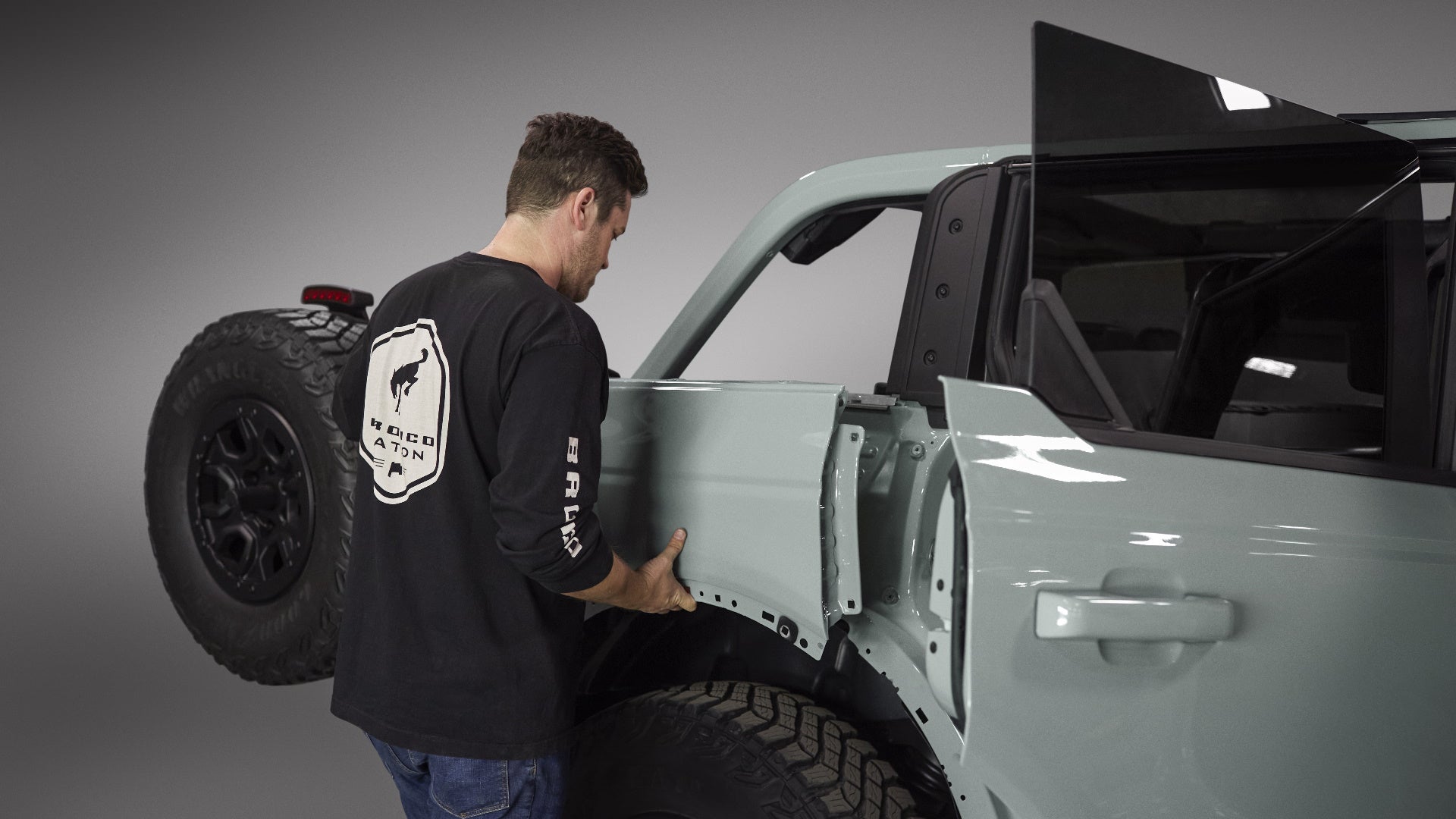 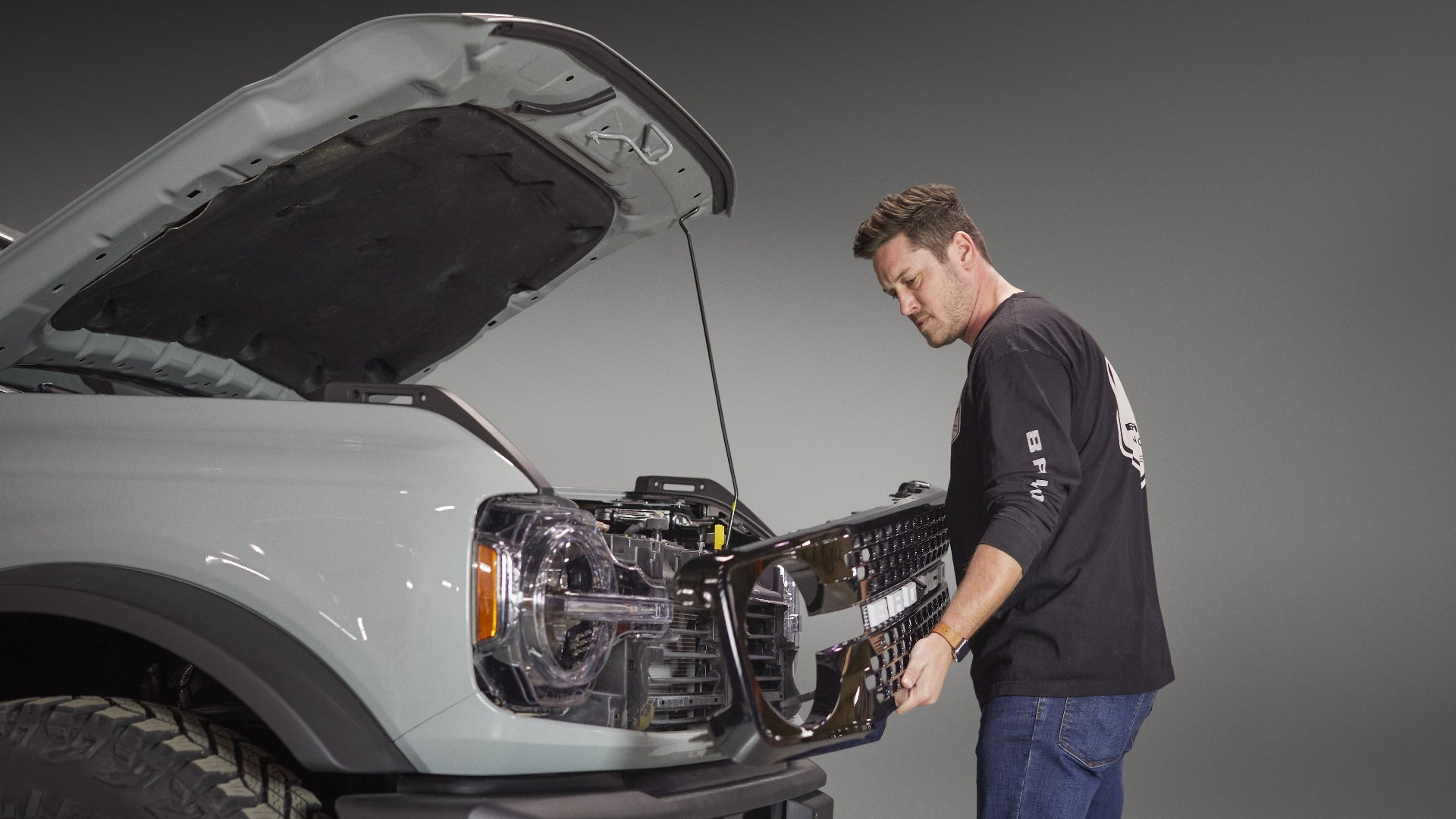 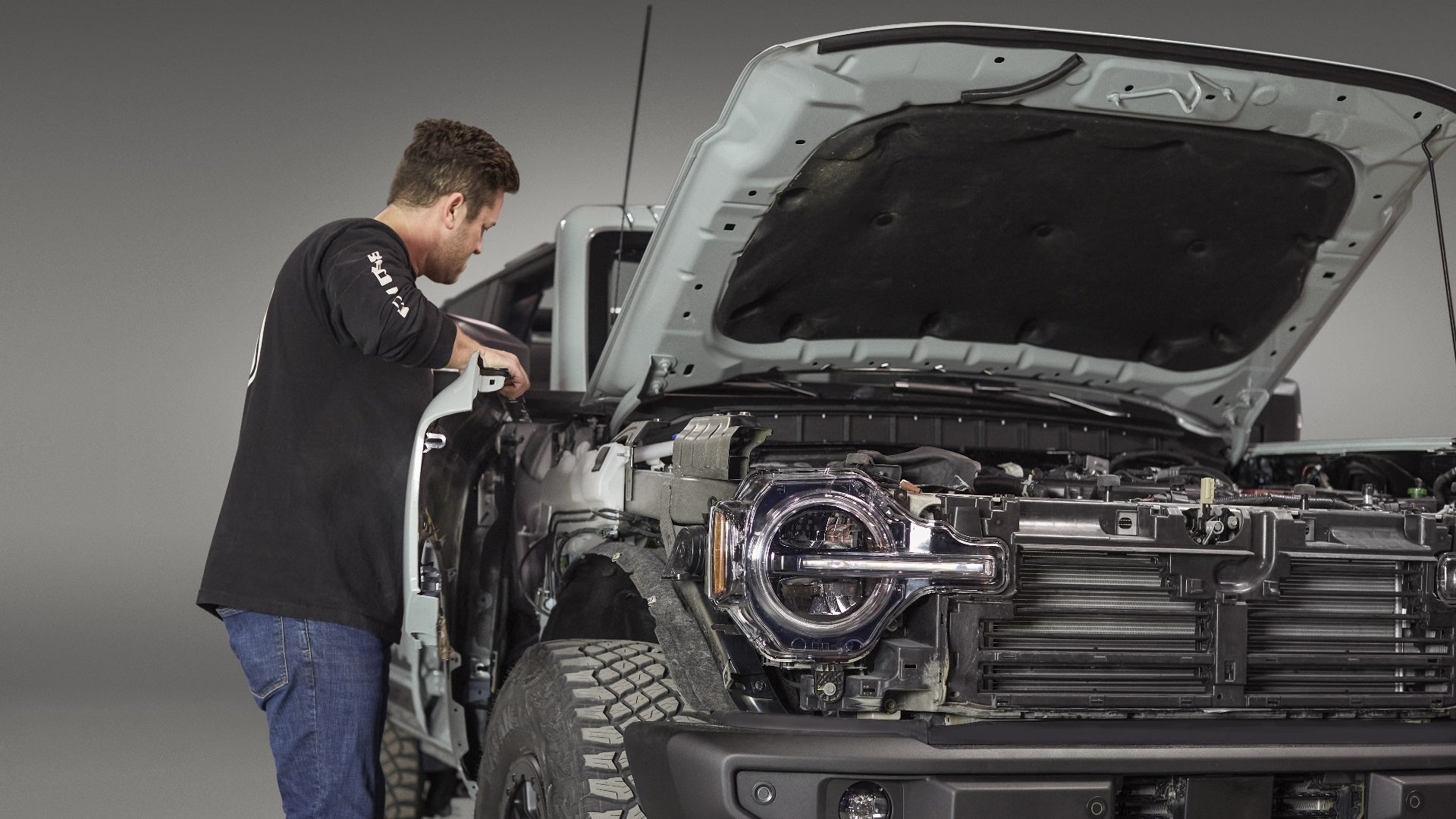 Parts like the roof panels, fender flares, and rear quarter glass actually require few or no tools at all to remove. The fasteners on the fender flares need just a quarter turn—it’s not clear if a tool is required here—while both the roof panels and rear quarter window can simply be unlatched. To remove the doors, one must simply remove two fasteners and separate an electrical connection, according to Ford.

An added bonus is that the Dearborn automaker says that even with all of these panels removed—including the doors—the vehicle still meets federal safety standards, which is pretty impressive. I mean, if I was in an accident in a Bronco I would like to have doors, but it’s nice that the truck is engineered to still be relatively safe without them. 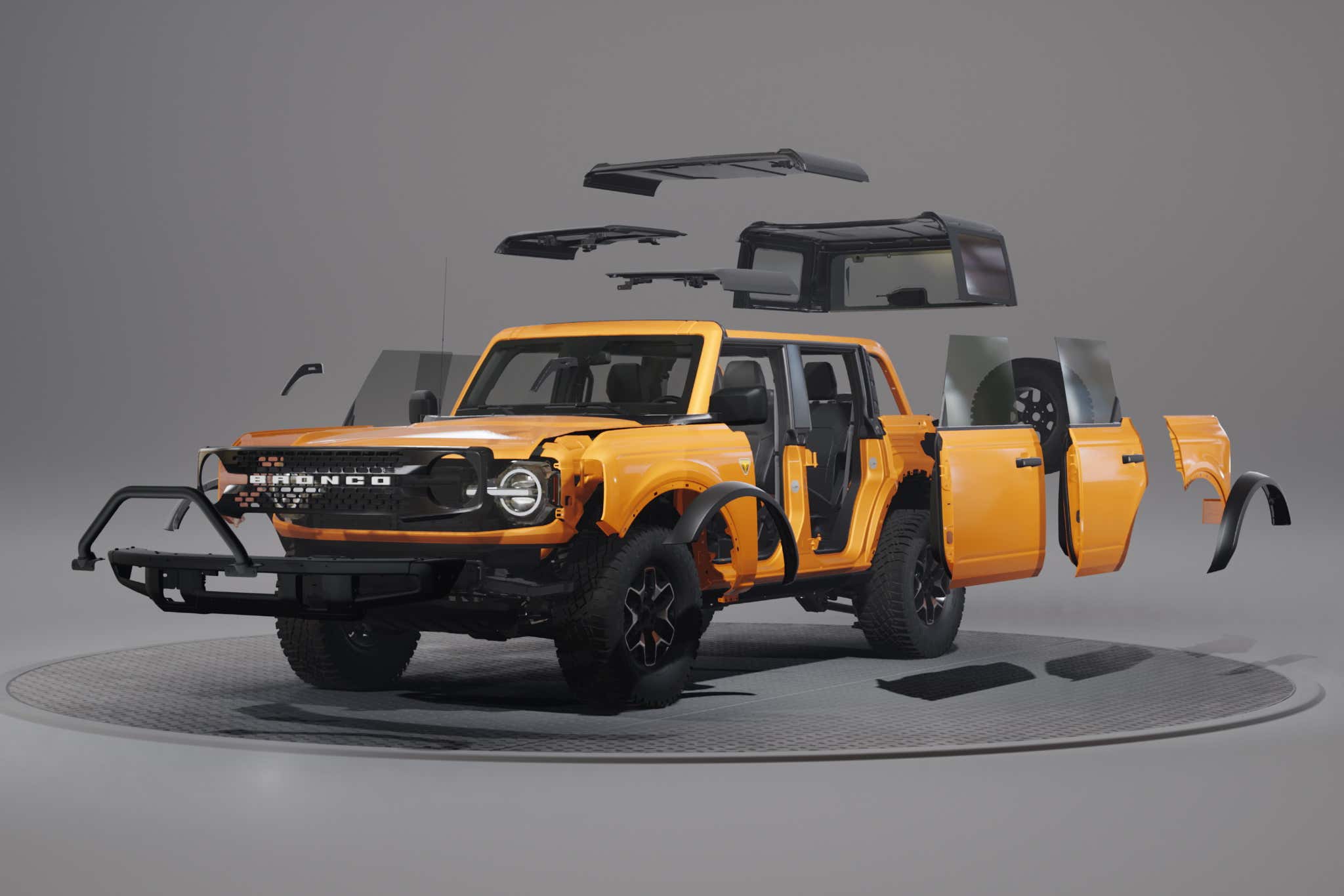 And yes, for those of you with an order on a new Bronco, it is on its way. Production is set to begin this month and according to Ford deliveries will begin in the summer, so not much longer. We all know why there are delays so there’s no point even mentioning it.

Rest assured, though, when your Bronco arrives you can take it apart to your heart’s content and it will still look good even without the body panels, even if you lose them. Maybe leave the headlights and taillights attached, though. Might need those.

Got some secret insider Bronco info you’re just dying to tell somebody about? Send me an email: [email protected]