The Next Porsche 718 Boxster And Cayman Will Be 'Exclusively' Electric 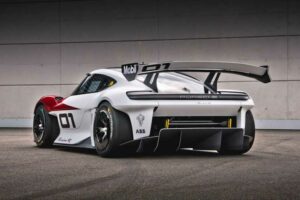 When the Porsche Taycan debuted in 2019, it offered intense performance that proved an electric car could be truly worthy of the Porsche badge. But with a commitment to going carbon-neutral and mostly electric by 2030, we always knew Porsche wouldn’t stop there. Now we know what’s next: an electric next-generation Porsche 718 sports car, like the rumors implied.

But this time around, whatever replaces the current Cayman and Boxster won’t have a gasoline engine at all. At the group’s annual press conference, Porsche CEO Oliver Blume confirmed the move and left little room for ambiguity.

“The Taycan is 100 percent a Porsche and inspires all kinds of people – existing and new customers, experts and the trade media. We are stepping up our electric offensive with another model,” Blume said. “By the middle of the decade, we want to offer our mid-engine 718 sports car exclusively in an all-electric form.”

Blume had promising news for fans of Porsche’s EVs, confirming that Taycan sales overtook those of the 911 in 2021 (although that model also posted record sales, so it’s not like people have lost interest in it.) He said that the company’s goal is to have 80 percent of its new cars be fully electric by 2030, and to have half be electric or hybrid by 2025. Evidently, that necessitates a move into fully electric sports cars, like the 718.

The current 718 (internally called the 982) debuted in 2017 in Cayman coupe and Boxster convertible form, carrying on the legacy started by the original 986 Boxster launched in 1996 that effectively saved the company. Since then — and though it’s always been somewhat in the shadow of its iconic 911 older brother — it has emerged as an enthusiast favorite, offering incredible performance at various levels to rival even the most expensive sports cars. The current 718 GTS, in particular, is an office favorite at The Drive, a kind of Greatest Hits album featuring everything we love about Porsche’s two-seat sports cars.

Despite that, 718 sales figures haven’t been great in recent years, suffering from the same decline that’s impacted many sports cars as the market has shifted to trucks and SUVs. (The 911’s sales success has been the exception, not the rule.) So Porsche is betting on both its electric future and the success of the Taycan with this move.

What’s not clear, however, is how Porsche can replicate the small, lightweight dynamics that made the Boxster and Cayman so beloved. Batteries are heavy; a Taycan weighs about 4,500 pounds on the lower end. Top Gear quotes Blume as saying the car “will have the typical dimensions of a roadster” and the magazine says the car will be built alongside the 911 and share many similar parts. It could also have an AWD version, a first for that model, but easy to imagine with a dual-motor setup.

Top Gear also says the electric 718 could resemble the recent Mission R concept, which was more racing-focused but boasted 671 horsepower — and looked great, to boot.

Big changes are coming to the 718 lineup to hopefully keep it relevant and competitive in the future, and in line with Porsche’s aggressive sustainability goals. But it will just happen without the sounds of a flat-six engine ringing in the driver’s ear, that’s all.