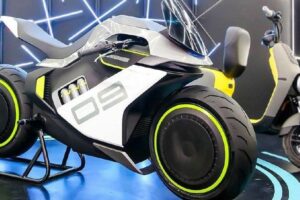 Although this might look like a sci-fi film prop, the Segway Apex H2 is nothing of the sort. It’s a prototype version of the render-only H2 concept first shown earlier this year, and it’s now been given a remarkably affordable price tag – 69,999 Chinese Yuan, which is about £8,000. So, it’s a little less than the recently launched Yamaha R7 .

The H2 isn’t powered by anything as ordinary as a parallel twin combustion engine, however. It has two power sources – a hydrogen fuel cell and a battery pack. Technical details are still thin on the ground, but we do at least know it produces 60kW (just under 80bhp) and will crack 62mph in around four seconds, topping out at 93mph. It’ll consume a gram of hydrogen for every kilometre it covers.

The slicks of the concept have been switched for treaded tyres, but otherwise, it all seems to be as per the concept, right down to those neat exposed hydrogen canisters.

Hydrogen isn’t the easiest stuff to get hold of – in the UK, for instance, there are just 11 filling stations that sell it. The H2 also seems to rely on a refuelling concept there isn’t the infrastructure for at all right now – those canisters can be removed when empty and switched for full ones. The bike isn’t due to launch until 2023, though, so the situation might have changed since then. And don’t be surprised if the price goes up a bit in the meantime.

Segway has shown interest in less radical battery-powered motorcycles, releasing the Apex concept (note the lack of ‘H2’) in 2020. Still primarily known for those self-balancing scooter things that were embarrassing even before Paul Blart: Mall Cop came out, Segway has been diversifying significantly since its acquisition by Chinese firm Ninebot Inc in 2015. If the Apex H2 is anything to go by, we can expect some interesting things from the company in the coming years.

Source: Segway via Visor Down