Home » News & Features » The Toyota GR Corolla Isn’t Coming To The UK, But This Used Toyota Corolla T-Sport Will Fill The Void

The Toyota GR Corolla Isn’t Coming To The UK, But This Used Toyota Corolla T-Sport Will Fill The Void 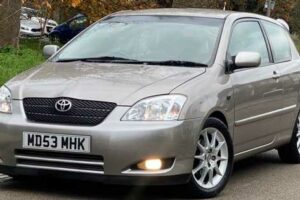 UK hot-hatch enthusiasts waking to news of the Toyota GR Corolla – the first spiced up Corolla released in around two decades – were crushed by confirmation it won’t be available here, being exclusive to North America. The good news is that it’s not the only highly-strung Corolla Toyota has ever built, and our alternative is much cheaper, too.

Some may consider the early 2000s the golden era of the hot-hatch, with the ST models of Ford’s Fiesta and Focus born during this time, as well as the Renaultsport Clio 172 and 182, and of course the EP3 Honda Civic Type-R. Even Toyota was in on the action with the Corolla T-Sport – built to rival the EP3.

In place of the Corolla’s usual fuel-sipper, the T-Sport features an upgraded 1.8-litre 4-cylinder engine which produces 185bhp, that revs to 8200rpm and uses a VVTLi variable timing system of a similar ilk to Honda VTEC, providing additional power at the upper reaches of the rev range. The engine, named the 2ZZGE, is best known for its appearance in Lotus Elise models such as the 111R and the Federal model, so it certainly has pedigree as a sporty powertrain.

While initial models of the T-Sport only included an engine upgrade over the standard car, this facelifted model also gets lowered and stiffened the suspension, a faster steering rack and some welcome tweaks to its body kit, adding a much-needed bit of aggression. Along with a six-speed manual transmission, the T-Sport offers all of the components to make for a worthy enthusiast hot-hatch, despite the lack of hype around the car compared to its rivals from the time.

While the model in question may not be the illustrious ‘Compressor’ model, of which Toyota built 250 cars with an OEM supercharger fitted to produce 213bhp, this T-Sport will certainly set you apart from the other hot hatches out on the roads and offer plenty of enjoyment while doing so.

So, would you rather have this, a Renaultsport Clio 172, or a EP3 Civic Type-R? Be sure to let us know what you think of the Toyota T-Sport, and visit the listing on AutoTrader if you want this one for yourself…